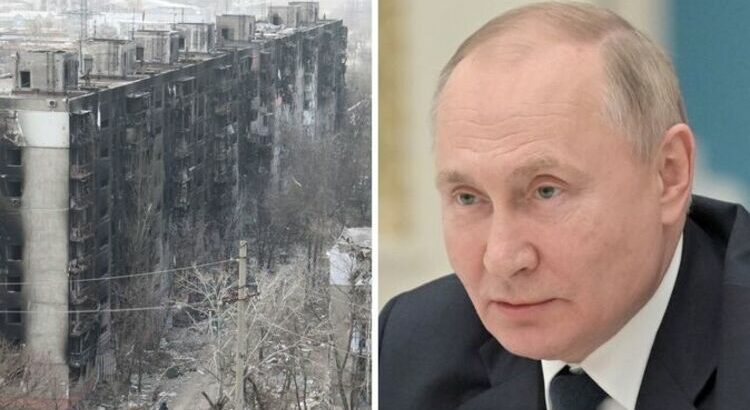 Russia and Ukraine are currently at the negotiating table, but few are convinced that the talks will translate to progress in the foreseeable future. While Moscow signalled it would reduce activity near Kyiv, the Ukrainian capital, Western officials suggested the move could simply be an attempt to “play for time”. Even Russian representatives appear to have dismissed any positive actions from the talks, with Kremlin spokesman Dmitry Peskov playing down any hopes of a breakthrough.

He told reporters that Russia had not noticed “anything really promising,” but said the chief Russian negotiator will provide an update later.

Many Ukrainian cities lie in ruins, with key public infrastructure having been obliterated, despite Russia’s assurances that its targets were military-related only.

Observers fear that, for encircled cities like Mariupol, Russia is reverting to tactics seen in the Syrian civil war, where residents and military personnel defending their homes were subdued into surrendering as a result of hunger and dehydration.

Natia Seskuria, an associate fellow at the Royal United Services Institute (RUSI), believes that Russia will continue with its brutal tactics until it achieves its goal of capturing Ukraine, explaining that these methods are rarely left alone once pursued.

Talking about the negotiations, she told Express.co.uk: “I think negotiations can definitely be a certain strategy to gain some time in terms of solving the tactical issues that they have been experiencing so far.

“But at the same time, Russia also needs some kind of pretext to say that they have tried to speak to Ukraine and negotiate with them — that it was because of Ukraine’s decision that it had to continue with shelling the cities and will continue with the military option.

“The demands they have imposed have been absolute non-starters for Ukraine because these included not only political neutrality, but also demands such as recognition of the independence of the Russian-occupied Ukrainian regions of Luhansk and Donetsk, and also Crimea.

“But I think if the Russian military does not gain any substantial advantage, they will be more willing to sit at the negotiating table and force Ukraine to accept these terms under the pressure of cities being shelled and the civilian population being killed.

JUST IN: Huge explosion rocks Russia as sparks fly on border with Ukraine

“We saw how the Opera House in Mariupol was bombed where many people and children were hiding.

“This was a very open message that all the brutal means will be used if Ukraine doesn’t abide by the Russian demands or until Russia achieves its goals in Ukraine, which I believe is regime change.”

On Tuesday, Putin said the shelling of Mariupol would only end when Ukrainian troops surrender.

He made the comments during an hour-long telephone call with French President Emmanuel Macron, according to the Kremlin.

But French officials suggested the Russian agreed to consider plans to evacuate civilians from the city.

New satellite photos have revealed the extent of the destruction inflicted upon the city.

Images released by the Earth observation company Maxar showed that vast swathes of residential areas have been reduced to rubble.

They also highlighted Russian artillery cannons in firing positions on the outskirts of the city.

Officials from France’s Elyseé palace called the situation in the city “catastrophic”.

They said “civilian populations must be protected and must leave the city if they wish to,” and that, “they must have access to food aid, water and the medicines they need”.

Their statement added: “This very degraded humanitarian situation is linked to the siege of the city by the Russian armed forces.”

Along with France, Turkey and Greece and several humanitarian groups have presented Mr Putin with plans to evacuate the city.

He told Mr Macron that he will “think about” the proposal.

Meanwhile, in light of Russia’s pledge to cut back its aggression, Ukrainian President Volodymyr Zelensky said “Ukrainians are not naive” and vowed to continue his country’s defensive military efforts.

In a video address on Wednesday, he said: “Ukrainians have already learned during these 34 days of invasion and over the past eight years of the war in Donbas that only a concrete result can be trusted.”

He said that, while there had been “positive” signals from the latest talks, “they do not drown out the explosions of Russian shells”.

Mr Zelensky continued: “The enemy is still in our territory.

“The shelling of our cities continues.

“Mariupol is blocked. Missiles and airstrikes do not stop.

“This is the reality. These are the facts.”