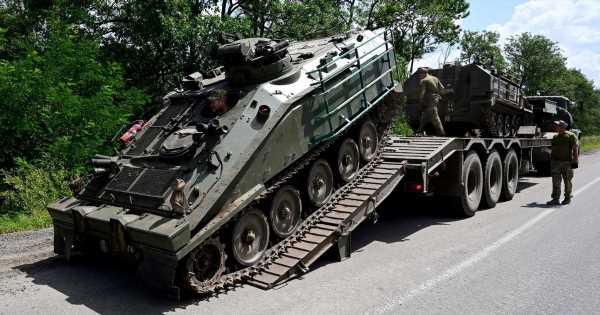 Desperate Vladimir Putin has resorted to using Cold War tractors on the frontline as he runs out of usable kit in Ukraine.

An intelligence report from the Ministry of Defence revealed the Russians are employing MT-LB vehicles, which were designed as “amphibious tractors” in the 1950s.

The revelation comes days after Mad Vlad claimed he hadn’t “started anything serious yet” in the under-siege country.

READ NEXT: Cops shoot dead man who made threatening 911 calls to ‘blow up’ the world

Putin is believed to be preparing to send yet more troops to fight in the Donbas region where Russian forces have captured Luhansk.

“They were originally designed in the 50s as a tractor to pull artillery, have very limited armour, and only a machine gun for protection.”

The ‘tractor’ carries a driver and a gunner, plus up to 10 troops in its tiny, airless hold.

The Russians began their invasion of Ukraine using the much more modern BMP-2 infantry fighting vehicles, which are armed with a 30mm autocannon and anti-tank missile launcher, with armour that is 33mm thick.

One military expert on Twitter ridiculed Russia’s use of these so-called tractors, writing: “Imagine a farmer in France and the only tractor you could afford is a Ford tractor from the 1950s?

"That's what an MT-LB is. An armoured tractor from the 1950s. The essence of how badly things are going right now for Mordor and the Orcgod is lost in abbreviations.”

Another commentator added: “I suppose this is in keeping with the reactivation of T-62s (battle tanks, first built in 1961). Russia only has a relatively small amount of modern equipment and they've been haemorrhaging from day one.”

The Arctic Fleets’ 200th Motorised Infantry Brigade has been sent in and local spies have said Russia is deploying new infantry units near Nizhny Novgorod.

It is believed Russia has lost more than 20,000 soldiers since it began its invasion on February 24.