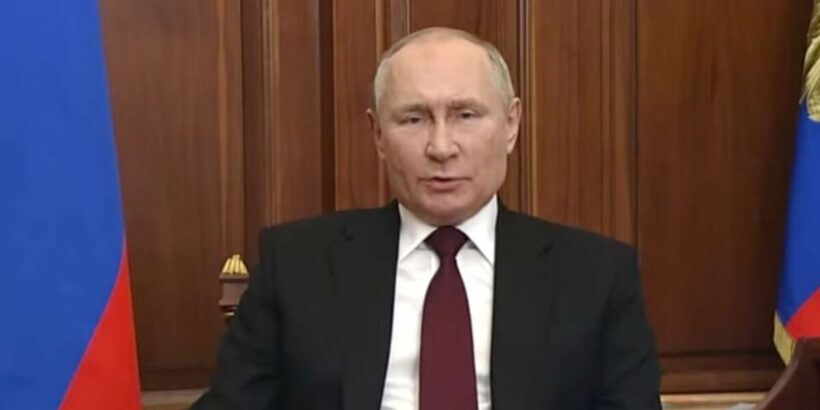 Speculation about Vladimir Putin’s health comes following US intelligence reports suggesting that he may be suffering from an “advanced form of cancer.” The former chief of the defence staff, Lord Dannatt raised the issue of Putin’s health during a recent TV appearance highlighting strange marks and colouration on the Russian leader’s hands and suggesting that Putin may not be as well as he looks to portray.

Lord Dannatt told Sky News: “We talked a number of months ago about how healthy or not Vladimir Putin was.

“Keen observers now are noting that his hands are looking pretty black on top, which is a sign of injections going in when other parts of the body can’t take injections.

“It’s interesting to note that and just to watch whether he is as fit and well as he would like to portray, it’s an interesting area to keep an eye on.”

The former chief of the defence staff also developed a battlefield update on the latest from Ukraine’s southern front around the Russian-occupied city of Kherson.

“It will appear that the Russians have moved some of their better troops to defend Kherson.

“And if it was to be lost, it’s a major… Major defeat a major embarrassment for Putin.

It comes after suspected Ukrainian maritime drones strike Russian ships based in the Crimean port of Sevastopol.

Footage supposedly recorded by the Ukrainian UAVs shows Russian forces desperately racking the sea with gunfire in an attempt to save their ships.

Kremlin officials looked to point the finger of blame for what they termed a “terrorist attack” on the UK, claiming with evidence that the British military had been aided by the Ukrainian units involved in the audacious strike.

The preparation of this terrorist act and the training of servicemen of the Ukrainian 73rd Special Center for Naval Operations were carried out under the guidance of British specialists located in the town of Ochakiv.”

Russia has also blamed the UK for the explosions which destroyed the Nordstream2 pipelines in the Baltic Sea last month.

On Saturday Russia said: “According to available information, representatives of this unit of the British Navy took part in the planning, provision and implementation of a terrorist attack in the Baltic Sea on 26 September this year – blowing up the Nord Stream 1 and Nord Stream 2 gas pipelines.”

Russia has failed to provide evidence to back up its claims, while the initial blame for the sabotage fell on the Kremlin.