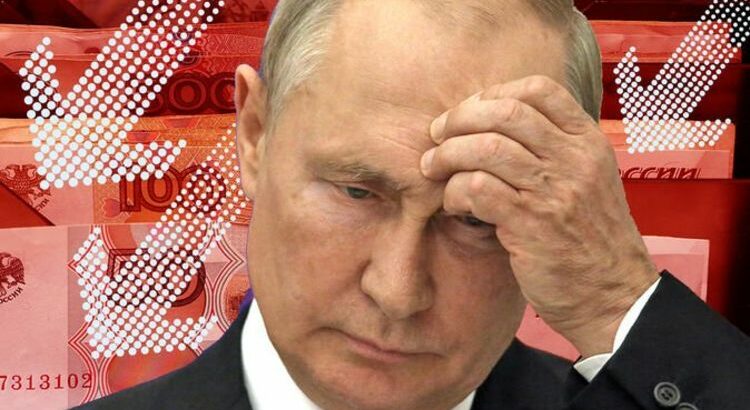 On Tuesday, French President Emmanuel Macron told the media he was assured by the Russian president troops would not advance into Ukraine anytime soon. Mr Macron said: “I secured an assurance there would be no deterioration or escalation.” Russia currently has over 100,000 amassed on the Ukrainian border, although it denies any intention to invade.

But former chief economist at the European Bank for Reconstruction and Development, Professor Sergei Guriev, told Express.co.uk that Western sanctions are taking a serious toll on the Russian economy.

He added: “One obvious indicator is the weak ruble – while Russian oil trades at 95 dollars per barrel, the ruble is at 75 rubles/dollar.”

He cited a comparison to pre-Crimea levels when the rate was 33 rubles to the dollar, with the price of oil only marginally higher.

Russia was slapped with sanctions back in 2014 after it annexed the Crimean Peninsula in Ukraine to global condemnation.

Professor Guriev warned that Russia would be capable of avoiding economic “collapse” if they were to invade Ukraine, but Russians are likely to be deeply “unhappy” with the consequences of such an incursion.

He said: “If Russia invades Ukraine and major financial sanctions are introduced, Russia will still be able to avoid macroeconomic collapse – as it has a balanced budget, huge FX reserves, low debt, and large sovereign wealth fund.

“It is highly unlikely that the West will introduce an oil/gas embargo.

“Without such an embargo, [the] Russian economy will continue to stagnate.

“Russians will be unhappy but Putin’s repression will make sure that Russians’ disillusionment with his policies will not result in immediate political change.”

He continued that an added dimension to the tensions around sanctions is the threat of nuclear weapons, which Russia would be “ready to use”.

He added: “Russia does have nuclear weapons – and he clearly signalled that Russia is ready to use them.

“This is why sanctions are so important – the West has shown that the sanctions can be used; and in recent years it has become evident that US, UK, EU are increasingly united in their sanctions policy.

“Putin knows that and is concerned about sanctions.”

These sanctions, in Mr Putin’s mind, have a legacy from when they were imposed on Russia in 2014.

The USA has threatened Mr Putin with the “mother of all sanctions”, and talks in Europe plan to go beyond the limits outlined in 2014.

Professor Guriev commented: “Economic sanctions proved their effectiveness already in the spring of 2014.

“When Russia annexed Crimea, it expected no pushback (like in 2008).

“When US introduced sanctions against Mr. Putin’s personal friends in March 2014, the dynamic has changed – and after Donetsk and Luhansk had their referendum in May 2014, Russia did not follow the Crimean scenario.

“To this day, Russia recognises that Donetsk and Luhansk are part of Ukraine.

“The more painful ‘sectoral’ sanctions were introduced in Aug-Sep 2014 (after [the]downing of flight MH17).

“That brought Russia to the negotiating table – so Minsk agreements were concluded.