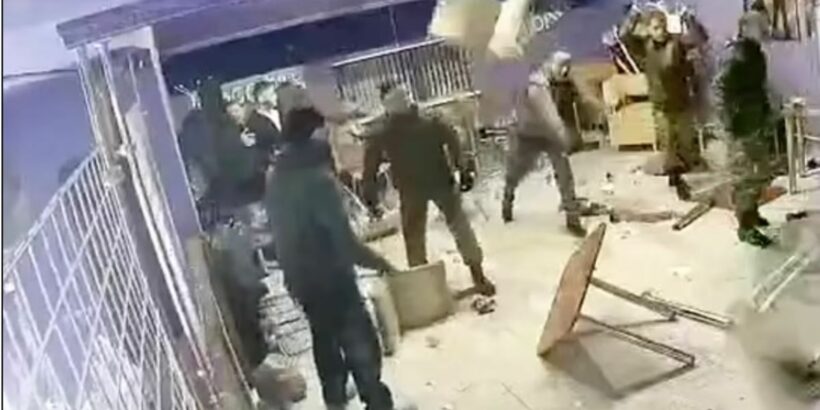 Russia: Aftermath of fire at nightclub

Uniformed Russian conscripts were filmed fighting with civilians in the Kemerovo region of Russia after being granted leave before heading to the frontline in Ukraine. The ill-disciplined soldiers clashed with a mob of men during a night out rashing a nightclub in the process.

The Russian servicemen are squaring off against a large crowd on the dance floor.

A group of terrified women can be seen fleeing the melee.

As the fight begins to go the way of the soldiers, the clubbers begin retreating out the exit under a hail of punches.

Punters at Grabli club in Yurga are believed to have been angered after the conscripts were allowed in.

A wounded soldier was reportedly taken to hospital for treatment.

It is unclear what action any Russian military authorities will take following the brawl.

The fight looks to have died down before the arrival of local police.

Meanwhile, Ukraine could face rolling blackouts across the country through March, an energy expert said, due to what another official described Tuesday as the “colossal” damage done to Ukraine’s power grid by relentless Russian airstrikes.

Ukrainians are being told to stock up on supplies, evacuate hard-hit areas — or even think about leaving the country altogether.

Sergey Kovalenko, the CEO of private energy provider DTEK Yasno, said the company was under instructions from Ukraine’s state grid operator to resume emergency blackouts in the areas it covers, including the capital Kyiv and the eastern Dnipropetrovsk region.

“Although there are fewer blackouts now, I want everyone to understand: Most likely, Ukrainians will have to live with blackouts until at least the end of March,” Kovalenko warned in a Facebook post.

“I think we need to be prepared for different options, even the worst ones. Stock up on warm clothes, blankets, think about what will help you wait out a long shutdown,” he said, addressing Ukrainian residents.

Russia has been pummeling Ukraine’s power grid and other infrastructure from the air for weeks, as the war approaches its nine-month milestone. That onslaught has caused widespread blackouts and deprived millions of Ukrainians of electricity, heat and water.

“This winter will be life-threatening for millions of people in Ukraine,” said Dr. Hans Henri P. Kluge, the World Health Organization’s regional director for Europe, due to the lack of power and Ukraine’s damaged health facilities.

Temperatures commonly stay below freezing in Ukraine in the winter, and snow has already fallen in many areas, including Kyiv.