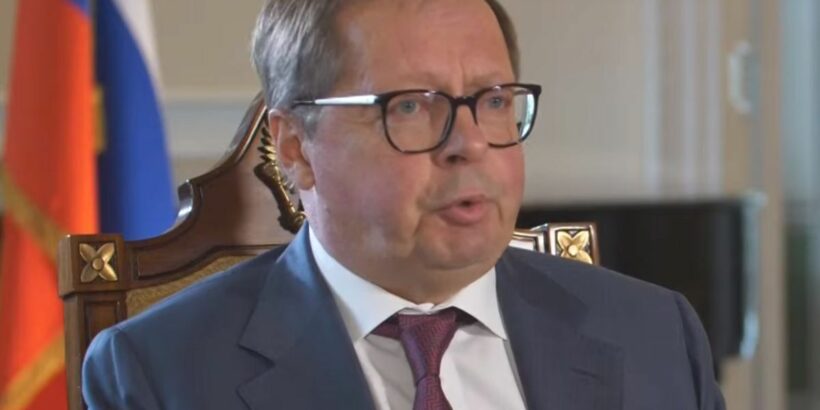 Russia 'will not use' nuclear weapons insists ambassador

Amid swathes of thinly-veiled nuclear threats from Vladimir Putin, the Russian Ambassador has defied the Kremlin to assert Moscow has no plans to launch a nuclear war. The news comes after global powers were put on high alert for a possible nuclear strike within Ukraine after Russian Defence Minister Sergei Shoigu reported of unfounded claims surrounding a supposed “dirty bomb” plot. Russian diplomat Andrei Kelin declared the West should have “every assurance” that the Kremlin would not trigger an international nuclear dispute.

During an exclusive interview with Sky News, Mr Kelin accused the West of “encouraging provocations with weapons of mass destruction”.

However, he went on to contrast the Kremlin’s previous hints of a nuclear retaliation over NATO’s intervention in Ukraine.

The Russian Ambassador to the UK said: “The nuclear war cannot be won and it should never be fought and we stick strongly to this statement.”

President Putin has previously declared he was willing to use “all weapon systems available” to defend Kremin interests.

Asked if Moscow would deploy a tactical nuclear weapon to further the invasion effort within Ukraine, the Russian diplomat asserted this was not a strategy that would be considered by the Kremlin.

Mr Kelin replied: “No. The world has every assurance that Russia is not going to use [a] tactical nuclear weapon in [the] Ukrainian conflict.”

Speaking at a defence conference in Russia just last week, Vladimir Putin declared: “We have never said anything proactively about Russia potentially using nuclear weapons. All we did was hint in response to statements made by Western leaders.”

The Russian President has repeatedly suggested that any Kremlin discussion of a potential nuclear conflict has been fueled by the threat of Western attacks on Moscow.

Discussion of Russia’s nuclear rhetoric intensified after Russian Defence Minister Sergei Shoigu made a series of calls to his Western counterparts.

The Kremlin Minister warned fellow diplomats that Ukraine had plotted to launch what he called a “dirty bomb” on its own territory.

The allegations made by Mr Shoigu were quickly identified to be completely unfounded and likely a Russian fabrication in order to falsely justify an escalation of the conflict in Ukraine.

The UK Ministry of Defence reported: “The Defence Secretary refuted the claims and cautioned that such allegations should not be used as a pretext for greater escalation.”

The reports from the Russian Defence Ministry generated a rare response as representatives from the UK, US and France united to release a joint statement on the matter.

Authorities of all three nations described the Kremlin allegations as “transparently false” and outlined the continued Western support for the Ukrainian defensive effort.

On Wednesday, the The Russian Foreign Ministry said it feared the five declared nuclear powers were teetering “on the brink of a direct armed conflict”.

It added: “We are strongly convinced that in the current complicated and turbulent situation, caused by irresponsible and impudent actions aimed at undermining our national security, the most immediate task is to avoid any military clash of nuclear powers.”

The statement comes after Vladimir Putin used a conference appearance to remind the audience: “As long as nuclear weapons exist, there will always be a danger that they could be used.”