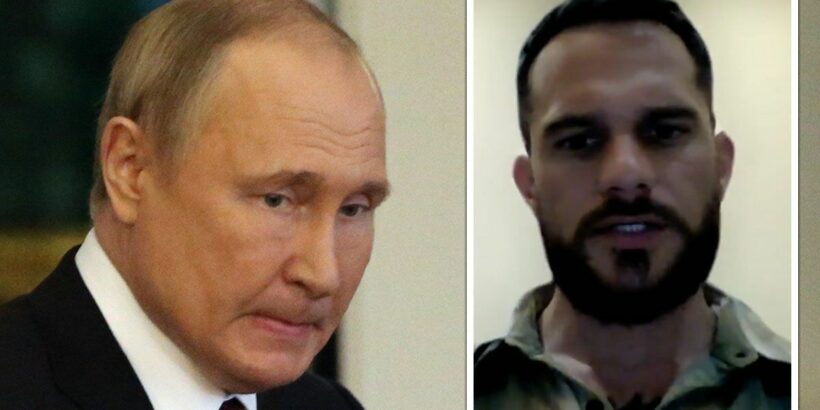 Former US Army medic Brennan Phillips, who trained Aiden Aslin – one of the two UK fighters sentenced to death – believes the “provocative” trial will backfire on Vladimir Putin’s Kremlin and Russian forces, as the verdict will embolden Ukrainian troops and the international community in their effort to defend Ukraine against Russia’s invasion. Mr Aslin was sentenced to death alongside Shaun Pinner and Morrocan national Brahim Saaudun on charges of terrorism and acting as mercenaries by a Russian-backed court in the self-proclaimed province of Donetsk after a three-day show trial.

When asked about his view on Mr Aslin’s death sentence, Mr Phillips said: “I think it will invigorate people more than anything. Whatever they thought they would have in this provocation, I don’t think it’s going to be well received.

“And they did this as a provocation. They chose, and I think many people expected, that Russia would choose the most provocative stance that they could take in quote on quote “death sentence.”

Though the Ukrainian separatist region has links to Putin’s Kremlin, Russian Foreign Secretary Sergey Lavrov has dismissed any involvement from Russia in the verdict.

“At the moment, the trials you mentioned are being held on the basis of the legislation of the Donetsk People’s Republic, because the crimes in question were committed on the DRP’s territory.”

Mr Lavrov added: “I’d rather not hinder the operation of the judiciary and law enforcement authorities of the Donetsk People’s Republic.”

Both Ukraine’s advisor to Ukraine’s interior minister Vadym Denysenko and war observers believe Putin’s Russia is trying to leverage the death sentences to extract concessions from the West and the ongoing negotiation process with Ukraine.

After the verdict, Mr Aslin said he had hoped the sentence would be “a lot fairer.”

“I wish it could be different but God will be the one that will judge me when the time comes”, Mr Aslin said.

Reflecting on Mr Aslin’s motivations to fight, Mr Phillips said: “He went to Ukraine in 2017. He has a Ukrainian fiancée. They do have or did have a home outside of Mariupol. And he was part of the 36th Marine Brigade. So, he had a well-established life in Ukraine, a Ukrainian citizenship.

“He planned on ultimately staying and living in Ukraine.”

Ukraine ambassador to the UK Vadym Prystaiko told Talk TV he has brought his support to the “patient” and “courageous” families of the two British nations.

“How can these people be so brave, so patient at the end of those days?”, Ambassador Prystaiko asked, adding: “So courageous to face those tragedies. Each and every day, they would receive telephone calls and video messages from them in captivity in these so-called courts.”

In an effort to secure the release of the two British fighters, Foreign Secretary Liz Truss has held phone calls with her Ukrainian counterpart. The option of exchanging Russian soldiers with the two UK nationals is on the table.

Secretary Truss said: “The judgment against them is an egregious breach of the Geneva convention. The UK will continue to back Ukraine against Putin’s barbaric invasion.”