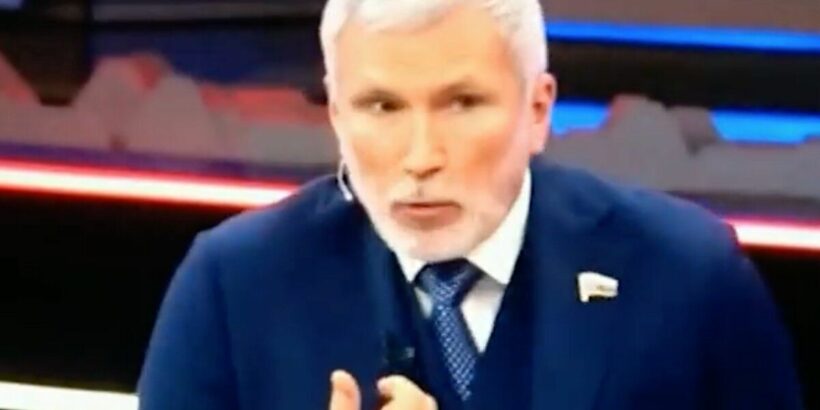 Russian lawmaker: 'two million' Ukrainians have to be 'destroyed'

Russian lawmaker Alexei Zhuravlyov has told state-owned TV says that five percent of Ukrainians need to be destroyed during a shocking rant during an on-air debate. None of the other studio guests or presenters seems to bat an eyelid as the Russian Duma member argued two million Ukrainians would need to perish in Vladimir Putin’s invasion in order to achieve Russia’s ultimate war goals.

Zhuravlyov told Russia1: “Three-quarters of Ukrainians are against tearing down monuments, only 19 percent support it.

“If we re-install their brains correctly, 12-15 percent will also believe it shouldn’t be done.

“So the maximum five percent are incurable. Simply put, two million people which are ready to recreate the SS.

“Azov is fascist SS, Ukraine’s Armed Forces are Wehrmacht. This is all plain to see.

JUST IN: Putin puppets warn Russia now has ‘only one target’ in nuclear strike

“Those two million people should either have left Ukraine or to be denazified, which means to be destroyed.

“For me, this is a civil war, unfortunately.”

British military intelligence said on Tuesday that Russia was advancing slowly into Ukraine’s Luhansk Oblast, adding that the massing of its forces in a small area raised risks for others elsewhere.

“Progress has been slow but gains are being held. Routes into the pocket likely remain under Ukrainian control,” Britain’s Ministry of Defence said in a Twitter update.

“Russia has achieved greater local successes than earlier in the campaign by massing forces and fires in a relatively small area. This forces Russia to accept risk elsewhere in occupied territory.”

Russian troops were slowly advancing towards the city centre in Sievierodonetsk, the governor of the Luhansk region said earlier in the day.

Putin’s army were slowly advancing towards the city centre in Sievierodonetsk, a regional governor said on Tuesday, giving an update from a pocket of Ukrainian resistance that has held back the broader Russian offensive in the eastern Donbas region.

Serhiy Gaidai, the governor of the Luhansk region, told Ukrainian state television that there were some 15,000 civilians left in Sievierodonetsk, as most of the city’s 120,000 people had fled the brutal bombardment by Russian artillery.

DON’T MISS:
Putin’s terrifying ‘superweapon’ can be placed ‘in range’ of UK [REPORT]
How to protect yourself after the deployment of biological weapons Hea [EXPLAINER]
‘Own goal’ Too dangerous for Putin to launch a cyberattack [REPORT]

Preparing for the worst, Gadai said Ukrainian troops defending Sievierodonetsk could retreat across the Siverskyi Donets river to the city of Lysychansk to escape encirclement.

As the Russian offensive continued across Ukraine’s eastern Donbas region, the European Union on Monday agreed to ban most imports of Russian oil, a move intended to blow a hole in the Kremlin’s war finances.

In the bloc’s toughest sanction on Moscow since the invasion of Ukraine three months ago, European Council President Charles Michel said the ban agreed at an EU summit in Brussels on Monday would immediately cover more than two-thirds of oil imports from Russia and cut a “huge source of financing for its war machine.”

EU leaders said they had agreed to cut 90 percent of oil imports from Russia by the end of this year, with exemptions for Hungary – a landlocked country that relies heavily on crude piped from Russia – and others concerned about the ban’s economic impact.