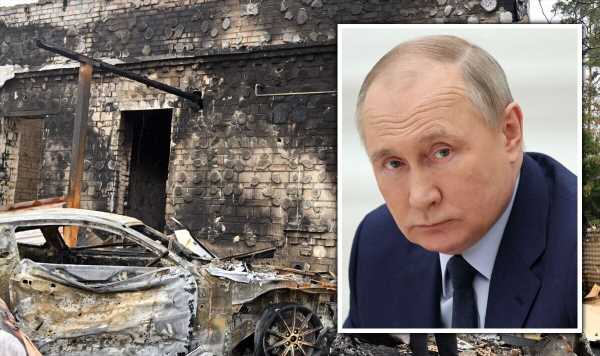 Russian propagandist warns 'no mercy' in war against the world

Since February 24, when Putin announced the start of his ‘special military operation’ in Ukraine, food supply issues have been flagged around the world. On Thursday, April 21, some EU leaders shared they believe Putin is deliberately creating a food security crisis, to further destabilise the world and create new refugee flows to Europe.

Speaking in Brussels on Thursday, US Deputy Secretary of State Wendy Sherman said “it’s incumbent upon the international community to step up and take action to prevent a global food security crisis”.

The US Embassy in Italy added in a handout following the meeting: “Deputy Secretary Sherman condemned Russia’s unjustified and unprovoked war of choice against Ukraine and its brutal tactics, including egregious atrocities.

“The participants discussed the importance of providing further military and humanitarian aid to Ukraine and to assist the millions who have been forced to leave their homes.

“They also discussed the imposition of additional sanctions and other economic measures to hold the Russian Federation accountable.

“All expressed concern over food security due to Russia’s war and pledged to work together to find solutions.”

Ms Yellen noted before the war, over 800 million people – or 10 percent of the global population – were suffering from chronic food insecurity.

She told a panel that countries should avoid export bans which could further boost prices, while stepping up support for vulnerable populations and smallholder farmers, a message underscored by German Finance Minister Christian Lindner.

She then added “I want to be clear: Russia’s actions are responsible for this,” noting the US was working urgently with partners and allies to “help mitigate the effects of Russia’s reckless war on the world’s most vulnerable”.

Dame Barbara Woodward, UK Permanent Representative to the UN , said during the “Arria formula” meeting on Conflict and Hunger on Thursday: “Today’s discussion is particularly timely because Russia’s invasion of Ukraine has disrupted the export of one third of the world’s wheat.

“So, Russia’s actions directly result in 1.7 billion people, in 107 economies, being severely exposed to at least one of rising food, or energy prices, or tighter finance conditions.

“In short, Russia has violated a sovereign nation, killed civilians and destabilised the global economy.

“As a result, countries on the Security Council’s peace and security agenda are increasingly fragile.”

At the end of March, Dame Woodward said “Russia’s appetite for war is taking food off the world’s table.”

Kali Robinson, writing for the Council on Foreign Relations, said Russia’s war on Ukraine “could amplify food insecurity in the Mideast”.

She wrote: “Russia and Ukraine have been called the world’s breadbasket; they’re both top exporters of cereal crops such as wheat, maize, corn, and barley.

“In 2020, each sent about half the wheat they produced to Middle Eastern and North African countries, according to the Observatory of Economic Complexity.

“The war is disrupting supplies of cereals and other goods the region needs most, such as oilseeds, cooking oil, and fertilizer.

“About one-quarter of Russia’s and Ukraine’s combined wheat exports and half their corn exports expected for 2021–22 are being held up.

“Much of the infrastructure in Ukraine that supports trade, including ports and rail lines, has been destroyed or impaired. Ukraine has also banned exports of some grains to protect its own supplies.

“Moreover, the conflict will likely continue to impede farming even if the fighting ends soon; the UN Food and Agriculture Organization estimates that 30 percent of crop areas in Ukraine will go unplanted or unharvested due to the war.”

Meanwhile, the World Bank warned a “human catastrophe” is unfolding due to a rising food crisis across the world triggered by Russia.

World Bank president David Malpass said in an interview with the BBC: “It’s a human catastrophe, meaning nutrition goes down.

“But then it also becomes a political challenge for governments who can’t do anything about it, they didn’t cause it and they see the prices going up.”

Mr Malpass also warned the historic rise in the food prices could lead hundreds of millions people across the world into poverty and lower nutrition, if the crisis keeps growing.