The allegations on Monday come amid rising tensions in the Gulf as a blockade imposed against Qatar by Saudi Arabia, the UAE, Egypt and Bahrain entered its eighth month.

They also follow Qatar filing two complaints at the United Nations over alleged violations of its airspace by Emirati military aircraft.

The GCAA condemned the alleged Qatari action as “a flagrant and serious threat to the safety of civil aviation and a clear violation of international law”, the WAM report said.

Later in the day, WAM said a second passenger plane en route to Bahrain was also intercepted by Qatari fighter jets. It did not offer additional details of the encounters and did not name the carriers involved.

Qatar’s foreign ministry dismissed the claim and said it would release a detailed statement later.

The State of #Qatar announces that the claims of Qatari fighter-planes intercepting a UAE civil aircraft is completely false. A detailed statement will follow.

US Central Command, which is based at the al-Udeid Air Base in Qatar, also did not have any report about incidents involving a commercial aircraft in the region, the Associated Press news agency said.

Describing the US Command as an “independent” and “credible” source, Ibrahim Fraihat, a political analyst at the Doha Institute, told Al Jazeera that the US military’s comment should be taken seriously.

The command “is friends of both parties and has not taken sides so far”, he said. “It also has strong military presence in the region and watching the air space nonstop.”

The latest developments were “dangerous”, Fraihat added, warning that they could escalate tensions in the Gulf.

The UAE’s claims could be “a response to the Qatari complaint of violations at the UN Security Council, or it could be part of the larger crisis, which has been at a stalemate for months now,” he said.

“Stalemate actually hurts both parties. Usually in conflict zones, parties would like to end the stalemate and sometimes they resort to such tactics.”

The Gulf crisis began in June 2017 when the Saudi-led group accused Qatar of supporting “terrorism”.

They severed diplomatic ties with the tiny Gulf state, closed their airspace to Qatar-owned flights and cut off most trade links.

Doha has rejected the allegations and accused the Saudi-led group of attempting to infringe on its sovereignty. 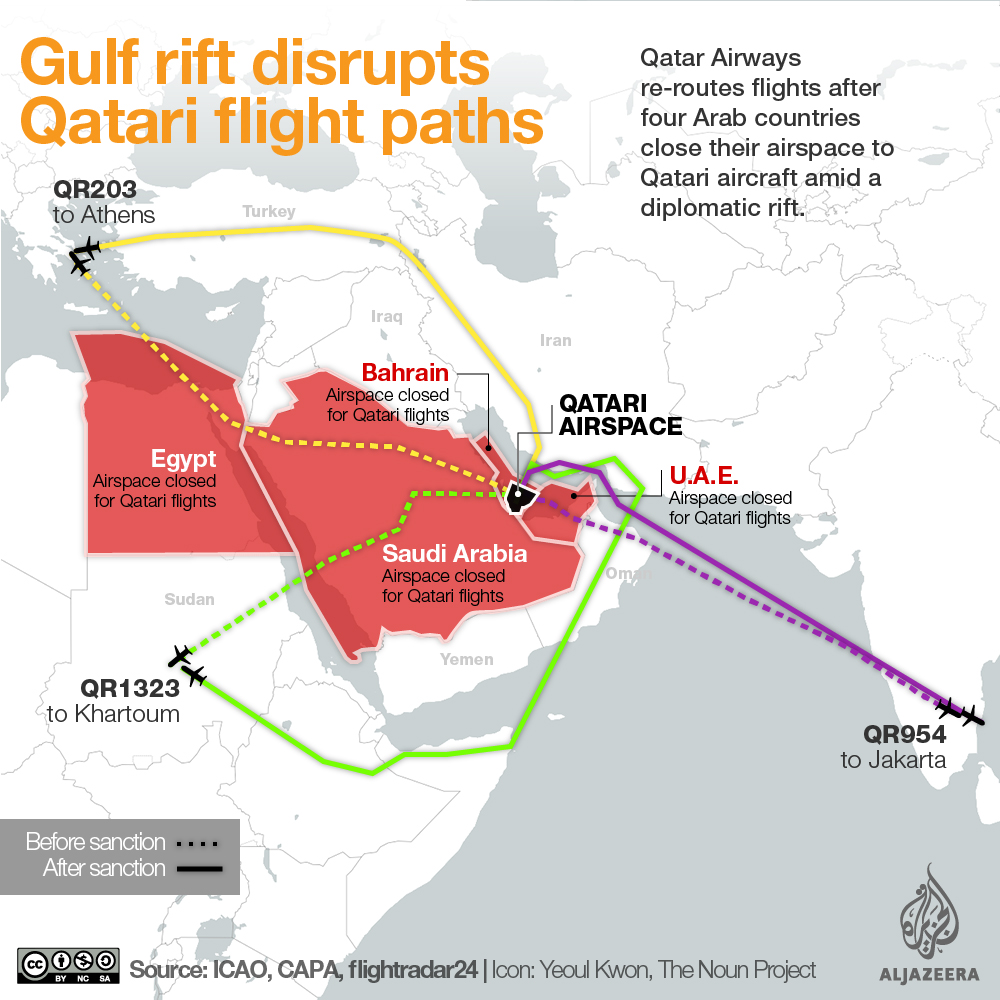