A man who allegedly breached quarantine to go to a Northbridge bar just hours after landing in Western Australia from Queensland has been charged with failure to comply with a direction under the Emergency Management Act.

The 53-year-old man arrived at Perth Airport on Friday afternoon after visiting family in Queensland but did not have a valid G2G exemption. He is now under police guard in hotel quarantine. 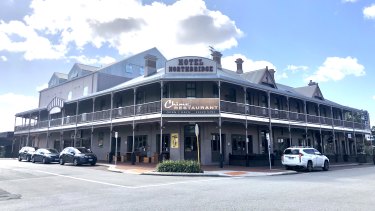 After complaining to authorities about chest pains, he was taken to hospital in an ambulance for treatment and told to wait for an escort to a quarantine hotel.

But he took off on foot, checking into a nearby backpacker hostel and going out to the busy Hotel Northbridge instead.

Police swooped onto the Lake Street premises shortly after, arresting the man and telling punters attending a karaoke night to head straight home and quarantine.

Officers wearing masks took down the partygoers' details and told them to get tested for COVID-19, but would not confirm whether anyone at the premises had tested positive for the virus.

Attendees at the karaoke night said some patrons went out to other venues after the hotel was shut despite being told to self-isolate.

Hotel Northbridge closed down for the rest of the night while staff carried out a thorough clean of the facilities.

The man has since tested negative for COVID-19 and was placed under 24-hour police guard in a hotel.

Police Acting Deputy Commissioner Paul Steel said there was no requirement from any bargoers to self-isolate or get tested for COVID-19.

"The COVID risk last night was deemed to be very low but as a precaution, and we commend the hotel for doing so, they chose to close the hotel to look after their staff and their patrons," he said.

"They took the matter seriously, we took breaches of quarantine seriously."

Premier Mark McGowan said the government would not tolerate the man's "unacceptable behaviour" and he would be left to face "the serious penalties that come with breaking our border laws".

"There is no excuses for lying your way into our state," he said.

"It sends a message that anyone thinking to sneak into WA — you will get caught."

But following the news, the WA president of the Australian Medical Association Andrew Miller took aim at the state government's management of quarantine requirements, saying it had "leaks all over the place" that could lead to a second wave the likes of Victoria.

"I think the government has been enjoying a lot of popularity with the closed border but it's looking like a bit of a one-trick pony at the moment," Dr Miller said.

"We've got leaks all over the place where COVID could get into our community and one day we are going to be unlucky enough that it'll start to spread.

"We thought that there were enormous resources being thrown at this by the government, why do they not know where people are who are supposed to be quarantining when we've got the technology in our pockets?"

A police spokeswoman on Sunday said media reports that WA Police were investigating whether the man would become the first person to wear an ankle bracelet in quarantine were unfounded.

The breach comes a week after two young Adelaide women were sent home for breaking quarantine rules to party with an amateur rapper in Coolbellup.

Isata Jalloh, 19, and Banchi Techana, 22, had travelled to Perth from South Australia without a valid exemption on August 17, telling authorities they wanted to holiday in WA and visit friends.

A week prior, a man ordered to quarantine at Perth’s Mercure Hotel was accused of fleeing through a window and down a ladder to visit his girlfriend on four occasions.

Barely a month earlier, a 29-year-old woman was charged by police after she flouted self-isolation rules and instead attended a birthday party and socialised with a number of elderly people.

Less than 24 hours later, a fly-in fly-out worker from Victoria contracted by BHP was charged by police after it was revealed he had flown straight to the Pilbara and attended work after landing in Perth from Geelong in early July.