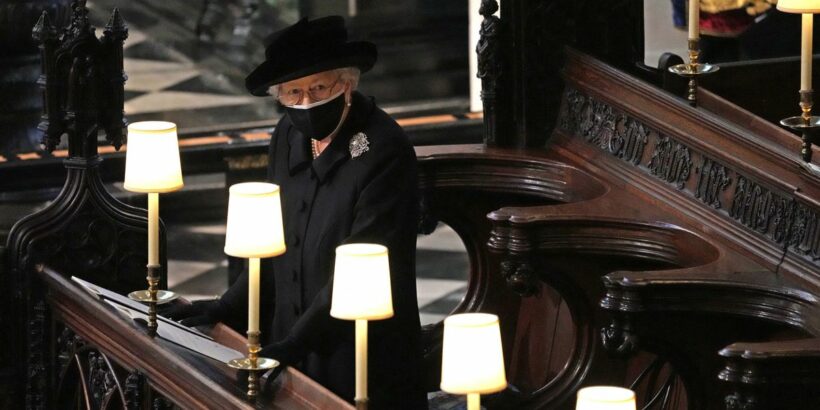 The Queen was comforted by a photo of her and Prince Philip as newlyweds during the funeral, taken just after the Second World War.

Her Majesty carried the photograph and one of the duke's handkerchiefs in the handbag as a precious reminder of happier times, according to a royal insider.

The monarch, who will celebrate her 95th birthday next week, wanted to include one of Philip's trademark white handkerchiefs, made by his Savile Row tailors Kent & Haste, the Daily Mail reported.

A crispy white pocket square was part of her late husband's style.

It is also reported that she kept a photo of the couple in Malta.

In 2015, the Queen spoke of her "happy" memories of living in the country in the 1950s, during the final part of her three-day state visit.

She claimed any visit to Malta, where she lived with the Duke of Edinburgh for two years shortly after they married, is "always very special for me".

The royal couple returned often, including to celebrate their 60th wedding anniversary in 2007.

During the Covid-secure Windsor Castle funeral, the Duke's grief-stricken wife left a personal, handwritten message to him with a wreath of white lilies, small white roses and white freesia she had chosen herself.

Buckingham Palace has not confirmed the contents of the note that appeared to be written on the official Palace writing paper.

The Duke of Edinburgh was taken from Windsor Castle in the back of a Land Rover he helped design for the army, to his resting place at St George’s Chapel at 3pm on April 17.

Several senior members of the Royal Family, including Prince Charles and Prince William, walked behind the coffin, until its approach at the Chapel, where Philip was lowered into the Royal Vault.

Queen Elizabeth II accompanied her husband's coffin on its final journey while their eldest son Prince Charles cried as he walked behind the casket with other devastated royals.

The monarch sat alone in St George's Chapel having wiped away tears as she accompanied the coffin.