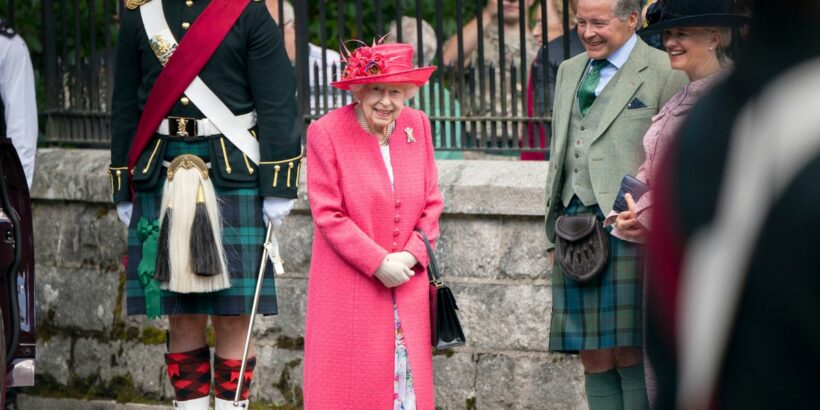 The Queen leaves little surprises for Prince William, Kate Middleton, and their children when they visit her at Balmoral, a royal author has revealed.

Katie Nicholl said Her Majesty personally chooses presents and leaves the gifts on her loved ones' beds when the Duke and Duchess of Cambridge visit with their children, Prince George, 8, Princess Charlotte, 6, and Louis, 3.

The royal author explained the sweet tradition in Vanity Fair: "When the Cambridges stay at the Queen’s Scottish castle, the monarch has been known to leave small personally chosen gifts on her grandchildren's beds."

It comes after it was reported the Cambridge's are spending 'special' time with the monarch at her Scottish highland retreat.

It is the first time the Duke and Duchess of Cambridge have had a family get-together since Prince Philip sadly passed away in April.

William and Kate along with their children spent the past week in Scotland and stayed with the Queen over the Bank Holiday for some "special time" together.

The August Bank Holiday weekend is one of the highlights of the calendar for the Royal Family with both William and the Queen being enthusiastic fans of the occasion, reports Vanity Fair.

“William, Kate, and the children have been enjoying some family time in Scotland and they have just spent some special time with the Queen,” a source said.

According to the source because Prince William spent "a lot of his childhood" at Balmoral he sees it as important that his "children experience" it too.

Time at Balmoral is filled with a lot of outdoor walking, fishing and cycling with William also partial to putting on a barbecue and feeding the troops after a long day.

According to a family friend the Queen enjoys the grandchildren and great-grandchildren's visits "immensely" over the Bank Holiday which on occasions turns into a "big sleepover".

The Queen's family have rallied around her since her husband the Duke of Edinburgh passed away, ensuring that she is supported and well looked after.

Kate and William will be returning to royal duties when the children go back to school soon but Kate reportedly doesn't want George to go to Eton because she wants him to "spread his wings".

The claims were made by a friend of the Duchess of Cambridge who said she would prefer the young Prince to go to Marlborough College where she got her secondary education.

Prince William attended Eton from the age of 13 before going to St Andrew's University, where he and Kate met.

A friend of Kate previously told the Daily Mail: "Eton hasn’t been ruled out but they have talked at length about Marlborough as an option and the smart money is on George going there instead.

It's been a year like no other for the Queen from the loss of her husband to heartache over Prince Harry. But Her Majesty has also had a lot of cause for celebration, including the birth of baby Lilibet. To mark what a year the Queen has had, OK! Magazine is bringing you a limited edition collector's issue. Get your hands on it here.