The Queen had secret surgery to remove a cataract shortly before royal wedding, Buckingham Palace reveals then wore sunglasses rather than cancel public engagements

The Queen had planned and successful surgery to remove a cataract in May, it was revealed today.

Her Majesty has been wearing sunglasses at many events in the past few weeks including watching the Epsom Derby and a number of Buckingham Palace garden parties.

Today it has emerged that this was because of a secret operation to remove a cataract before Prince Harry and Meghan Markle’s wedding on May 19.

The eye operation, believed to be on around May 4, is the most common procedure on the NHS.

But she was treated as a day patient at the private King Edward VII’s hospital in London – where Prince Philip had a hip replacement this year.

It was still business as usual for the head of state, who did not cancel or postpone any engagements. 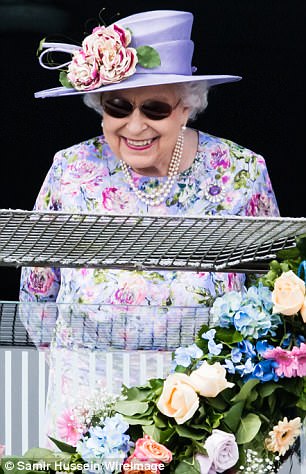 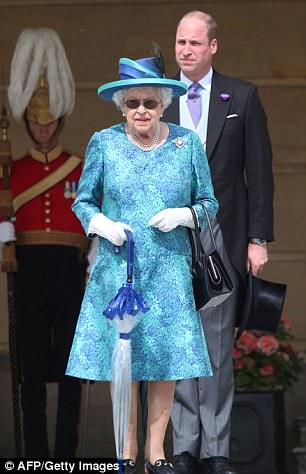 The Queen had surgery in May to remove a cataract, it was revealed today, forcing her to wear dark glasses while watching the Epsom Derby on June 2 and at a Buckingham Palace garden party on May 31 (left to right) 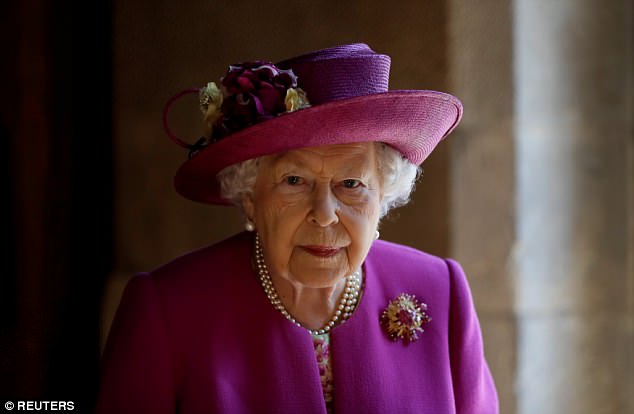 A Buckingham Palace spokesman said: ‘I can confirm that the Queen successfully underwent a short planned procedure to treat a cataract last month.’

Cataracts are when the lens, a small transparent disc inside the eye, develops cloudy patches. 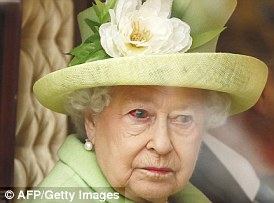 Cataracts occur when the lens – a small transparent disc inside the eye that helps to focus light – becomes cloudy.

The patches gradually become bigger over time, according to the NHS, and can lead to blurry vision and, in some cases, blindness.

Cataracts affect around half of over-65 in the UK. Some 24 million adults aged over 40 in the US suffer, according to figures.

The Royal College of Ophthalmologists last year warned that due to a rapidly ageing population, the number of required cataract operations is expected to jump by 50 per cent over the next 20 years.

Yet in his new book ‘The Complete Patient’s Guide to Cataract Surgery’, leading eye surgeon David Allamby claimed there simply will not be enough specialists to cope with the soaring demand.

People are more at risk if they have: diabetes, suffered an eye injury, take certain medications or have other eye conditions.

Symptoms normally develop very slowly and include being more sensitive to light and thinking everything looks washed out.

Cataracts can be removed by surgery and replaced with an artificial lens. No other treatment is available.

The Mail has long campaigned against the current unfair system for surgery in the UK, which were a postcode lottery until the health watchdog issued guidelines last August to tackle problem, which had led to many sufferers being denied the straightforward 30-minute operations.

The Queen is known for her robust health. Her husband Prince Philip, 96, is the same, but he has recently retired from public duties.

Their son the Duke of York once described his mother as being incredibly fit for her age, and the 92-year-old monarch still rides her Fell ponies at Windsor, and drives, mainly around her private estates.

She has called time on her overseas travels, leaving long-haul destinations to the younger members of her family.

But she still has a busy diary of events, and in 2017 carried out 296 engagements.

In November 2017, the Prince of Wales led the nation in honouring the country’s war dead on Remembrance Sunday at the Cenotaph.

It was the first time that the Queen, as head of state, had watched the ceremony from a nearby balcony, and was seen as a sign of the royal family in transition and an acknowledgement of her age.

Just before Christmas 2016, the Queen and the Duke of Edinburgh both fell ill with heavy colds, forcing them to delay their trip to Sandringham by a day.

The Queen was not well enough to attend the Christmas Day service at St Mary Magdalene church and also missed the New Year’s Day one.

She later described it as a ‘particularly grisly mixture of cold and flu’.

She turned 90 in 2016 and, the same year, used the lift rather than stairs to enter Parliament for the State Opening, avoiding the 26 steps of the royal staircase at the Sovereign’s Entrance.

Buckingham Palace said the ‘modest adjustment’ to arrangements were made for ‘the Queen’s comfort’.

The decision was attributed to the Queen suffering from knee pain.

In 2014, the Prince of Wales stood in for the Queen for part of the Order of the Bath service to avoid her having to make an extra journey up and down some steep steps in full regalia.

In November 2013, the Duke of Cambridge stepped in to represent the Queen at an investiture ceremony after she suffered some ‘mild discomfort’ with her ankle after a busy weekend of engagements including the service of remembrance at the Cenotaph. 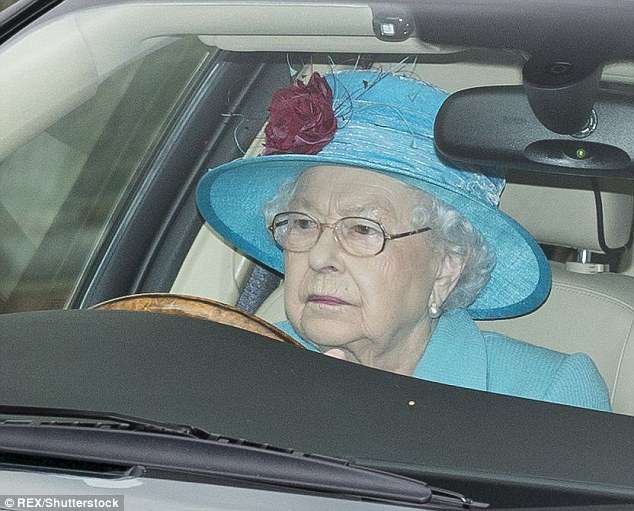 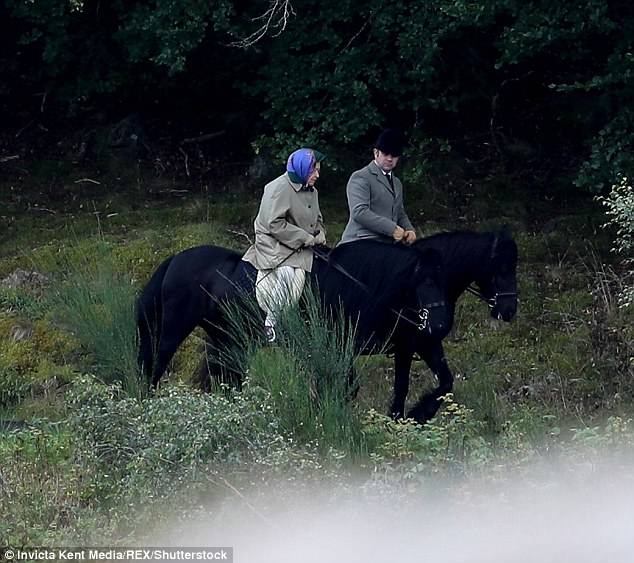 She is also known to be quite physically fit, shown riding a horse at Balmoral with her groom last September

Her first hospital stay in 10 years came in 2013 when she was 86 after she suffered symptoms of gastroenteritis and missed an engagement in Swansea when she was due to present St David’s Day leeks to the 3rd Battalion The Royal Welsh.

On March 3 2013, she was admitted to King Edward VII’s Hospital to be assessed.

A week of engagements, including a two-day trip to Rome, was cancelled.

The Queen spent one night in hospital and left thanking staff and smiling before being driven to Buckingham Palace to rest.

It was thought her public appearances were back on track until Buckingham Palace announced on the morning of the Commonwealth Day Observance service on March 11 that she regrettably could no longer attend ‘as she continues to recover following her recent illness’.

It was the first Commonwealth Day Observance service she had missed in 20 years, the last occasion being when she had flu in 1993.

Buckingham Palace insisted it was just the ‘tail end’ of the symptoms and that her condition had not worsened.

But the next day she cancelled her engagements for the rest of the week, with her son, the Duke of York, saying later that it was sensible not to risk her coming out, but that she was not ill.

Her illnesses have been few and far between over the years.

She has suffered from back pain, and also had operations to remove torn cartilage from both knees.

She caught measles when Prince Charles was two months old in 1949 and had to be separated from her baby son. 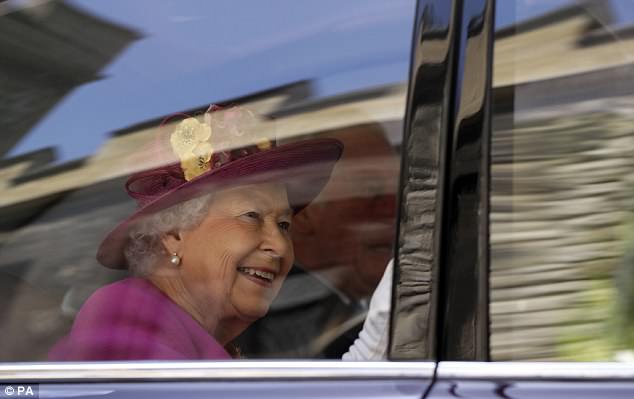 The first time the Queen was actually admitted to hospital was in July 1982 when she had a wisdom tooth extracted at the King Edward VII Hospital in central London.

The Queen’s no fuss approach to injury and illness was perfectly illustrated in 1994.

She broke her left wrist when her horse tripped during a ride on the Sandringham estate in Norfolk.

The break was not diagnosed until almost 24 hours later when her arm was X-rayed and set in plaster at a hospital.

It was the first time she had fallen in many years and the Queen had simply brushed herself down, remounted her horse and trotted on back to Sandringham.