London: The Queen’s estate could face a lawsuit over the Libyan version of the Elgin Marbles standing in Windsor Great Park.

Lawyers acting for the North African country have said that “nothing is off the table” in the attempt to have 2000-year-old columns returned from the royal park to the ancient site of Leptis Magna near Tripoli. 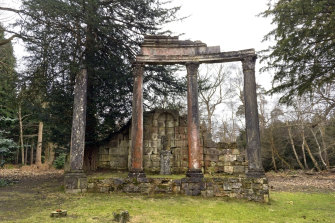 Libya could sue the Queen’s estate to ensure the ruins are repatriated, it has emerged, as lawyers argue that “like the Elgin Marbles” the artefacts were taken illegally by British imperial officials in the 19th century. The Crown Estate, which oversees Windsor Great Park and its contested Roman ruins on behalf of the monarch, has been officially asked to either return the artefacts or provide proof that they were not stolen.

“We say that these were stolen and they should be returned as a matter of moral obligation,” Mohamed Shaban, the lawyer acting for Libya, said.

“For us, now, nothing is off the table with regard to what we can discuss, but also how we take this forward.”

It is understood that Libyan officials – galled by a piece of national heritage being a curiosity in a British park – are first seeking an “amicable” return of the ancient ruins with the help of the Crown Estate, but are then willing to plead their case to UNESCO, or launch into a more “acrimonious dispute” and litigation.

A legal battle could be fought in the UK courts, or the International Court of Justice, to secure the ornate assortment of stone and marble columns, and pedestals.

They were originally erected separately in Leptis Magna in the 2nd century AD, and survived there even after it fell into ruin, but in 1818 they were shipped from Tripolitania (now part of Libya) to the UK by Hanmer Warrington, a British diplomat. It has been claimed that they were a gift from a local official to the future George IV and, after the pieces were first brought to the British Museum, the king’s architect made them into an artificial “Temple of Augustus” at Virginia Water in Windsor Great Park, where they are now the Grade II listed property of the Crown Estate.

The park’s website says the “surprisingly fragile stones recently underwent restoration a project to carefully repair and protect them – with all of the stone and bricks used coming from the original site”.

The estate has been asked to produce proof of the official’s “gift”, but Libya claims there is no proof that Warrington legally acquired the ruins while on his diplomatic mission in North Africa, and that he simply stole them.

Shaban, who is based in London, said: “Much like the Elgin Marbles, they were taken in the 19th century and moved to Britain – almost at the same time in fact. We say that they were stolen and should be returned.”

The Libyan claim mirrors the Greek government’s contention that the Parthenon Marbles were taken from Athens unlawfully by Lord Elgin from 1801 to 1812, while the British Museum has argued he acquired them legally through the local (Ottoman) authorities. 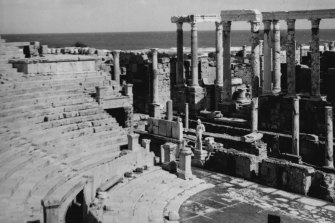 The theatre, stage and auditorium of Leptis Magna, a Roman city in Libya, in 1967.Credit:Universal Photo/File

Efforts to have the sculptures returned to Greece have proved unsuccessful, and it is unclear what legal case Libya might have for repatriation.

The time elapsed since the alleged theft would make a legal case difficult, and both the UK and Libya would have to agree to seek a settlement through UNESCO. It could be difficult to prove in court that modern-day Libya has rightful ownership of artefacts created and “stolen” before it existed.

Alexander Herman, restitution expert and director of the Institute of Art and Law, said that “legal claims to recover historically removed artefacts like this are very often beset with insurmountable challenges”.