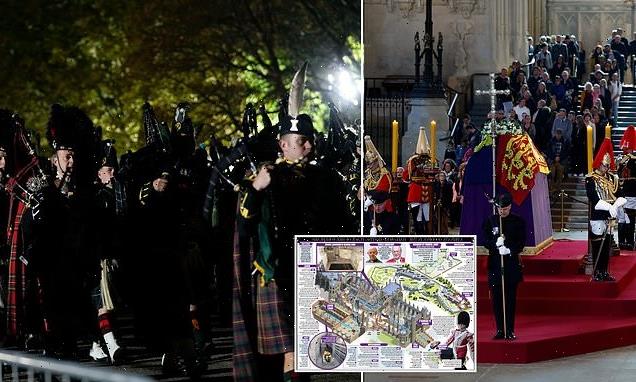 The Queen will approach her final resting place at Windsor Castle to the moving sound of her favourite bagpipes playing a Scottish rebel lullaby.

A Massed Pipes and Drums band from Scottish and Irish regiments will play the Skye Boat Song – the theme song for TV series Outlander – as the funeral procession gets near to the Castle gates.

The traditional 19th century Scottish song recalls how Bonnie Prince Charlie fled to the Isle of Skye to avoid capture by Government troops after being defeated at the Battle of Culloden in 1746.

The choice of the song which celebrates the Jacobite rebel who had battled English soldiers might well have raised the eyebrows of a few of the Queen’s ancestors.

But the Queen was known for her love of bagpipes and Scotland, and would almost certainly have heard the comforting and romantic tune many times in her lifetime.

She even had her own piper play for her for 15 minutes at 9 am every morning when in residence at Buckingham Palace, Windsor Castle, Balmoral or Holyroodhouse. 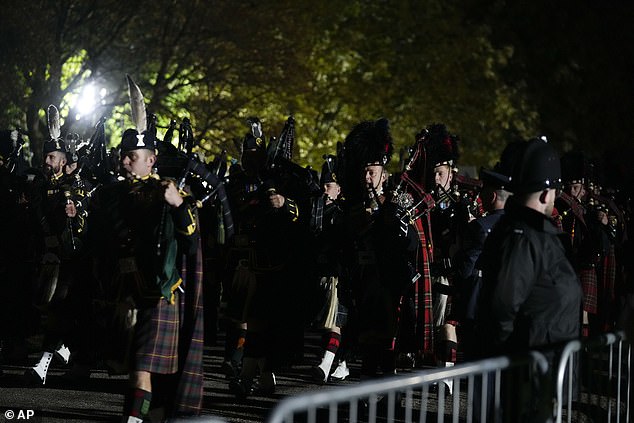 Bagpipes are played as military personnel take part in final drills along the Long Walk in Windsor on Friday night, as they prepare for the State Funeral of Queen Elizabeth II on Monday

The Skye Boat Song, often played as a lullaby or waltz, was composed in the late 19th century by Sir Harold Boulton, but was later rewritten by Robert Louis Stevenson who judged the original Jacobite air of the lyrics as being ‘unworthy’.

The line ‘Over the Sea to Skye’ is still used today as a cornerstone of the tourism industry on the Isle of Skye.

The song has been recorded by many artists including Rod Stewart, Tom Jones, Roger Whittaker and Tori Amos.

When it was used as the opening song for the 2014 TV historic drama series Outlander, the line ‘Sing me a song of a lad that is gone’ was changed to ‘lass’ to fit the plot of a woman going back in time in Scotland. 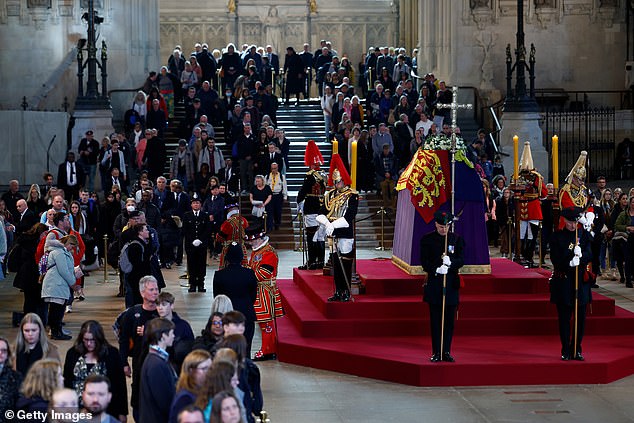 A Massed Pipes and Drums band from Scottish and Irish regiments will play the Skye Boat Song – the theme song for TV series Outlander – as the funeral procession gets near to the Castle gates. The Queen’s coffin is pictured lying-in-state on Sunday

The tune will be played as total of 406 military personnel on foot and horseback, and 40 staff from Royal households, escort the State hearse for one and a half miles as it approaches the Castle.

It was heard during the closing stages of a solemn dress rehearsal held in darkness as the procession marched down the Long Walk, approaching the Cambridge Gate to enter the grounds of the Castle at around 5.30am yesterday.

Tens of thousands of people are expected to watch the procession in the Long Walk tomorrow before it is joined by members of the Royal family inside the Castle grounds.

Security was tight as the rehearsal got underway in darkness under starlit skies with armed police watching over the scene while dog handlers carried out searches.

The rehearsal revealed details of how the procession at Windsor will take place after the Queen’s coffin is driven in the maroon-coloured State hearse from central London.

Merry of soul he sailed on a day

Over the sea to Skye.

Eigg on the starboard bow;

Glory of youth glowed in his soul;

Where is that glory now?

2. Give me again all that was there,

Give me the sun that shone!

Give me the lad that’s gone!

3. Billow and breeze, islands and seas,

Mountains of rain and sun,

All that was me is gone.

Speed, bonnie boat, like a bird on the wing, Onward! the sailors cry; Carry the lad that’s born to be king Over the sea to Skye.

1. Loud the winds howl, loud the waves roar, Thunderclaps rend the air; Baffled, our foes stand by the shore, Follow they will not dare.

2. Many’s the lad, fought on that day

Well the claymore did wield;

When the night came, silently lay

3. Though the waves leap, soft shall ye sleep, Ocean’s a royal bed.

Rocked in the deep, Flora will keep

Watch by your weary head.

4. Burned are their homes, exile and death Scatter the loyal men; Yet ere the sword cool in the sheath Charlie will come again.

Hundreds of police will be spaced out ten yards apart on either side of the Long Walk, where they will watch over the crowds.

Another 477 soldiers, sailors, Royal Marines and RAF personnel in full ceremonial uniform will line the avenue, facing inwards in a mark of respect for the late Monarch.

Officers with measuring sticks will ensure that are standing in pairs opposite each other on either side of the Long Walk and exactly ten paces apart.

The hearse is set to arrive at Shaw Farm Gate in Windsor just after 3pm on Monday.

A single mounted police officer on a white horse will lead the procession, followed immediately behind by three other police horses.

Behind them and marching ahead of the hearse will be a dismounted Detachment from the Household Cavalry Regiment with their drawn swords pointing to the ground.

They will be followed by a mounted Division of the Sovereign’s Escort, resplendent in their red uniform with their swords pointing upwards.

Kilted musicians in the Massed Pipes and Drums and the Bands of the Coldstream Guards and the Household Cavalry will be next in line, playing their music in turn as the procession proceeds.

A group of civilian staff from the households of the late Queen, King Charles and the new Prince of Wales will follow behind.

The State hearse will have the Queen’s Company Colour, the Royal Standard of the Grenadier Guards and a Sovereign’s Standard of the Household Cavalry, carried at the front and rear.

It will be flanked by the Queen’s pall bearers and 26 other soldiers from the 1st Battalion Grenadier Guards, dressed in their imposing red uniforms and bearskin hats as they march in silence.

Two more mounted and dismounted Detachments from the Household Cavalry will follow behind with four more mounted police at the rear.

As the procession slowly makes its way down the Long Walk, service personnel lining the route will be ordered to present arms, and stand with their heads bowed and rifles pointing down.

The rehearsal was witnessed by a handful of members of the public including teacher Peter Leech, 43, his wife Hannah, 40, and daughter Catherine, 12, who had travelled through the night from their home in Bournemouth, Dorset.

The family had planned to view the Queen lying in state at Westminster Abbey, but changed their minds when they stopped at a motorway service station at 2am, and decided the queue was too long.

Mr Leech said: ‘We decided to come to Windsor to see the flowers, and someone told us that the rehearsal was taking place so we decided to stay here. It is quite surreal to see all this going in the middle of the night.

‘I am glad we are here. I wasn’t sure what to expect, but it feels like this is part of history, watching the bands and all the soldiers marching past.’

Former solicitor Donna Stoneman, 55, who lives in Windsor, said: ‘I thought I would come and watch because I couldn’t sleep. Logistically, it is an amazing sight. I can’t imagine the amazing amount of organisation that must have gone into planning everything.

‘It is going to be so sad not to hear the Queen’s bagpipes any more. I could often hear the sound of them being played for her at 9am every day when she was in residence.’

Lt Col Fred Wells, the Commanding Officer of the 1st Battalion of the Coldstream Guards who guarded the procession route, described the rehearsal as ‘absolutely critical’ to make sure everything went to plan. 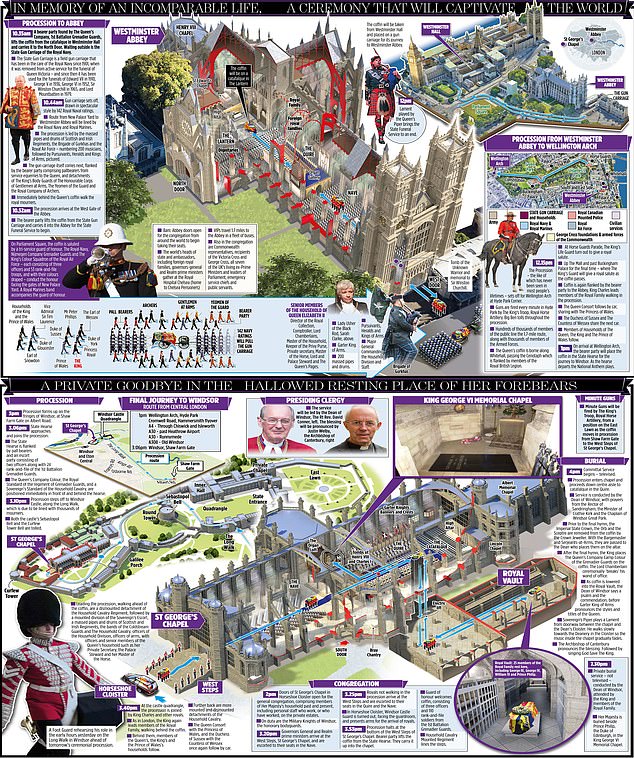 Around a million people will line the streets of London tomorrow to witness historic scenes of breathtaking pomp and splendour, punctuated by historic moments of sorrow and solemnity, as Her Majesty’s coffin is transported from Westminster Hall to Westminster Abbey

He said: ‘It involved getting a group of soldiers, sailors and aviators coming together for the first time to get things right for Her Majesty on Monday. There has been a lot of preparation behind the scenes and numerous units have been involved.

‘The bands had some problems reading their music in the dark, and the horses were a little frisky, but I am sure they will be fine on the day.

‘The funeral will be one of the most immense occasions of my career. Being able to pay tribute to such an amazing lady is a real honour and privilege. It will be the most momentous parade of our lifetimes.’

Lance Cpl Liam Budd, 28, of the Coldstream Guards who will be part of the guard outside St George’s Chapel, said: ‘I always had a massive sense of pride when I looked the Queen in the eyes. Her death has hit the whole country and I will be more than a little sad to see her pass for the final time.’