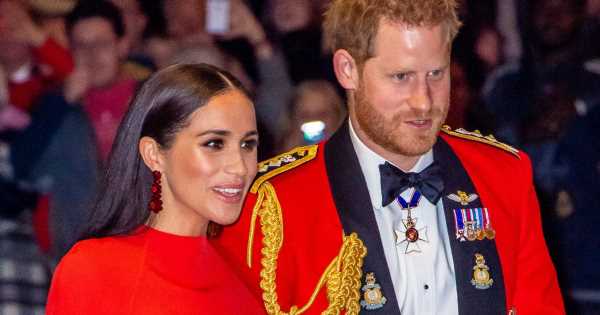 The Queen's platinum jubilee plans create a "headache" for Prince Harry and Meghan Markle as staying away is "not an option" for the runaway royals, an expert has said.

Buckingham Palace on Wednesday announced a string of activities to mark her majesty's 70 years on the throne with a four day bank holiday this time next year.

In a column for news.com.au, royal expert Daniela Elser wrote: "However, the bunting-heavy celebration will likely create a much bigger and more pernicious headache for runaway royals and newbie content creators Harry and Meghan, the Duke and Duchess of Sussex.

"For the Sussexes themselves, leaving the trans-Atlantic bond to fray even further and resolutely staying away is not an option."

The Queen is set to become the first British monarch to celebrate a Platinum Jubilee, having acceded to the throne aged 25 on February 6 1952.

The first day of the June 2-5 holiday will see more than 1,400 parading soldiers, 200 horses and 400 musicians coming together to stage Trooping the Colour in full for the first time since the pandemic.

The parade will close with the traditional RAF fly-past, watched by the Queen, 95, and the Royal Family from the Buckingham Palace balcony.

As per tradition, beacons will be lit throughout the United Kingdom, Channel Islands, Isle of Man, UK Overseas Territories and, for the first time, in each of the capital cities of the Commonwealth countries.

Ms Elser added: "The next day, there will be a service of thanksgiving at St Paul’s before the entire royal family will trot along to the Derby at Epsom.

"Then will come a series of street parties across the country called The Big Jubilee Lunch finally concluding with something called the Platinum Jubilee Pageant, which will involve more than 5000 people and will happen against the backdrop of Buckingham Palace.

"At most of these events Her Majesty’s family will most likely be front and centre, giving us the deliciously bonkers prospect of seeing Take That’s Gary Barlow and Camilla, Duchess of Cornwall sharing a stage in the not-too-distant future."

The expert added: "Later that day, the BBC will produce and broadcast the Platinum Party at the Palace that will include Ed Sheeran, Sir Tom Jones, Robbie Williams, Kylie Minogue, and Sir Elton John.

She said the Sussexes – who quit as senior royals last March and now live in a mansion in Montecito, California, US – had publicly accused the Royal Family of "racism, cruelty, neglect and bullying" over the last four months.