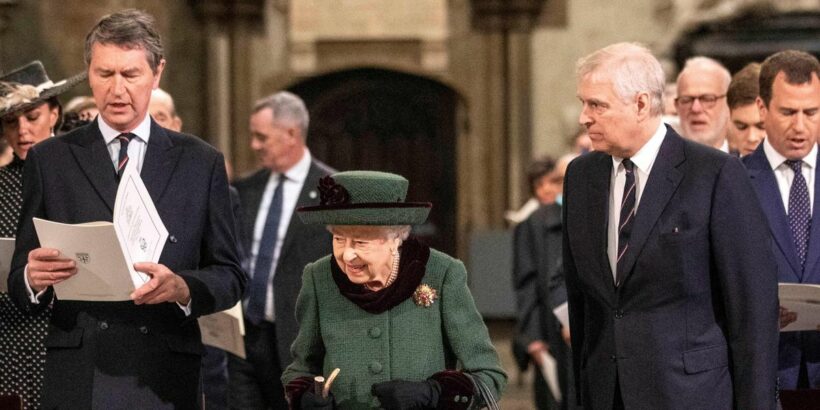 The Queen was heavily involved in the planning of yesterday's memorial service for her late husband Prince Philip and left a beautiful tribute to him hidden in plain sight.

The heartbroken monarch ensured there were plenty of personal touches at the event at Westminster Abbey – despite the congregation being 1,800 strong.

Among the sweet tributes was one dated back to the day Her Majesty married Philip in November 1947 – in the same Abbey.

That's because the flowers in the church for the memorial service were in shades of patriotic red, white and blue, with larger arrangements featuring blue eryngium – known as sea holly – a nod to the duke’s career in the Royal Navy, and his lifelong affection for the sea, Mirror reports.

However, the smaller posies included white dendrobium orchids – the flowers that appeared in Princess Elizabeth’s wedding bouquet when she married Philip in 1947.

The Queen is said to have personally requested orchids to be included in her wedding bouquet.

The rest of the service itself also featured several of Prince Philip's poignant last requests that were finally honoured almost a year from his funeral.

When he died last April aged 99, England was still in the grip of restrictions due to the Covid-19 pandemic.

This meant his funeral, held on April 17 at St George's Chapel in Windsor, was a much scaled-back service, with just 30 guests and no singing by the guests.

It had been Philip's express wishes for the congregation to join and sing the rousing hymn Guide Me, O Thou Great Redeemer at his funeral.

The hymn was sung by a small choir, guests at his funeral were not allowed to join in but yesterday (March 29), this request was finally fulfilled when the packed congregation sang the hymn.

Nearly all members of the Royal Family attended yesterday's event including Prince Charles and Camilla, as well as the Duke and Duchess of Cambridge with Prince George and Princess Charlotte.

The other royal attendees included the Earl and Countess of Wessex and their children Lady Louise Windsor and Viscount Severn, Princess Royal and Vice Admiral Sir Tim Laurence, Prince and Princess Michael of Kent, the Duke of Kent and the Duke and Duchess of Gloucester.