QUENTIN LETTS: A hundred years on, Remembrance is the ritual that still brings a quaver to my voice (as your incredible pictures show how communities are honouring the fallen)

This Remembrance Sunday I will do my duty at our village church and read a long list of the dead of two world wars who attended the prep school my family used to run.

There are 96 names listed by surname only, for that is how they were known at the school. ‘Anderson, Batty, Bolton ma, Bolton mi, Boyce, Brownrigg . . .’ it begins, just some of the carnage of Jutland, the Western Front and beyond.

Among the World War II dead are two sets of three brothers, the Jenner-Fusts and Lanes, killed at places such as Java, Alamein, Burma, Malta.

One small school in England lost 94 boys and two teachers in those wars. The list acquires a rhythm of its own, almost the toll of a funeral bell. 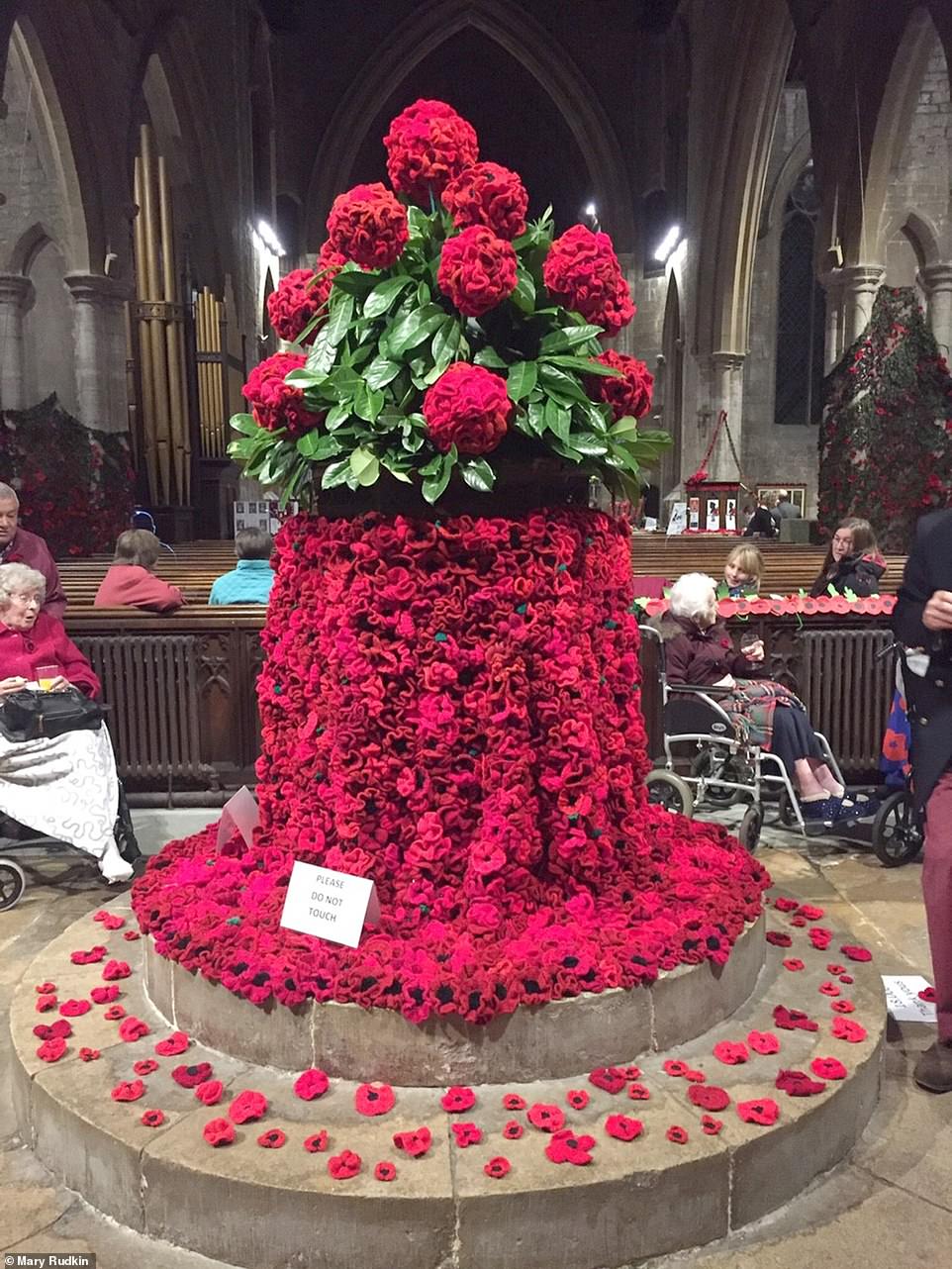 This arrangement – Heckington 100, from in Lincolnshire – commemorates the 31 men from the village who died in the First World War. St Andrew’s Church (pictured) has been decorated with 18,000 poppies, which are knitted, crotchet or painted. People from all parts of the community took part in the project to honour the wardead 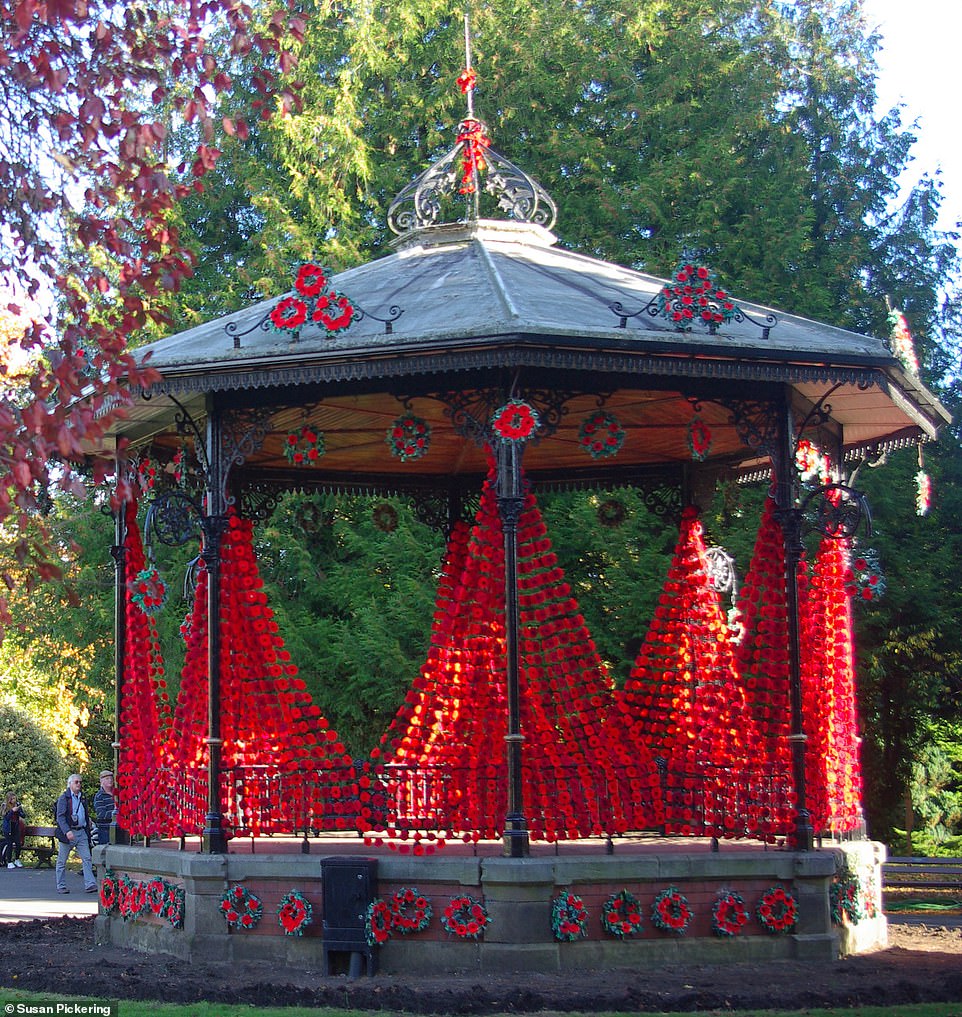 This display to commemorate the fallen is in Ripon Park, North Yorkshire. You can send your tributes to us by emailing [email protected] 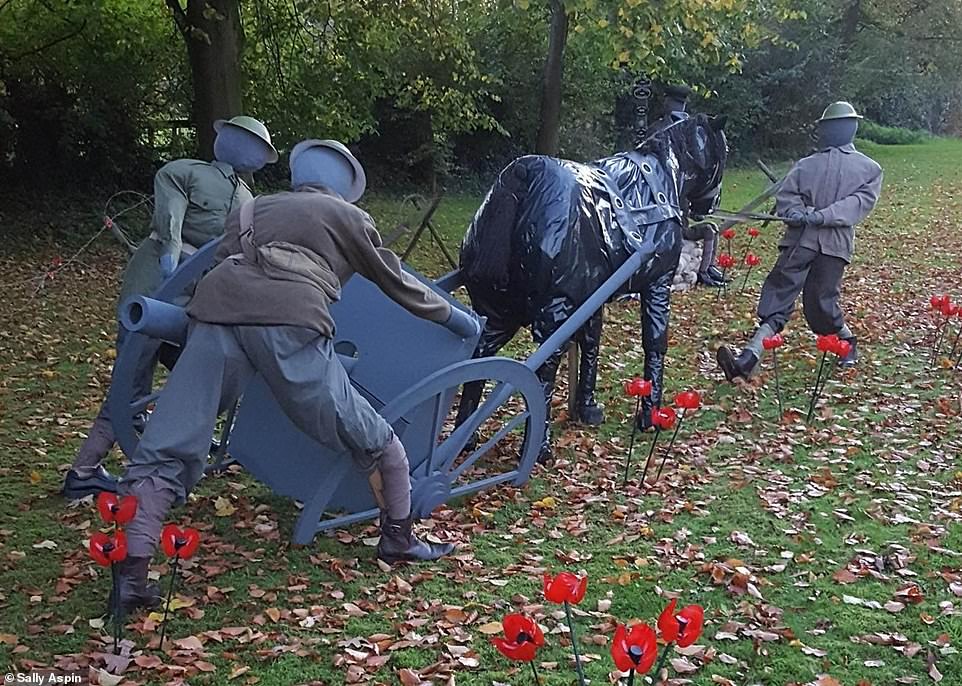 A World War One tableau on village green in Lower Peover near Knutsford in Cheshire. The figures are traditional scarecrows made of wood and straw 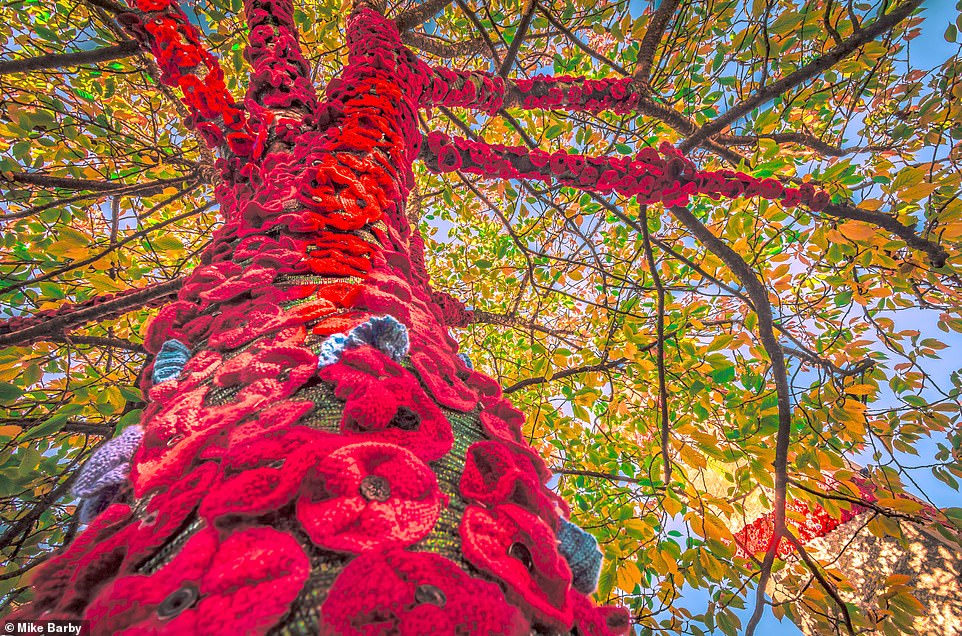 Knitted poppies decorate a tree in Nailsworth, Gloucestershire, where the wardead are being remembered ahead of the centenary of the First World War 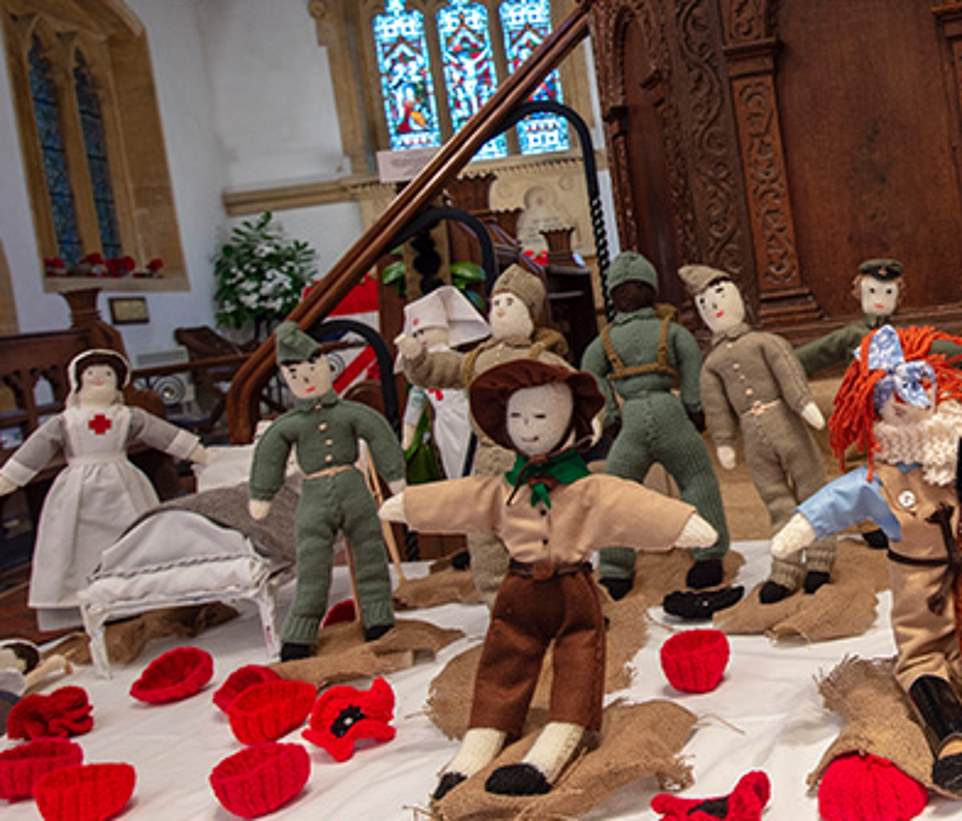 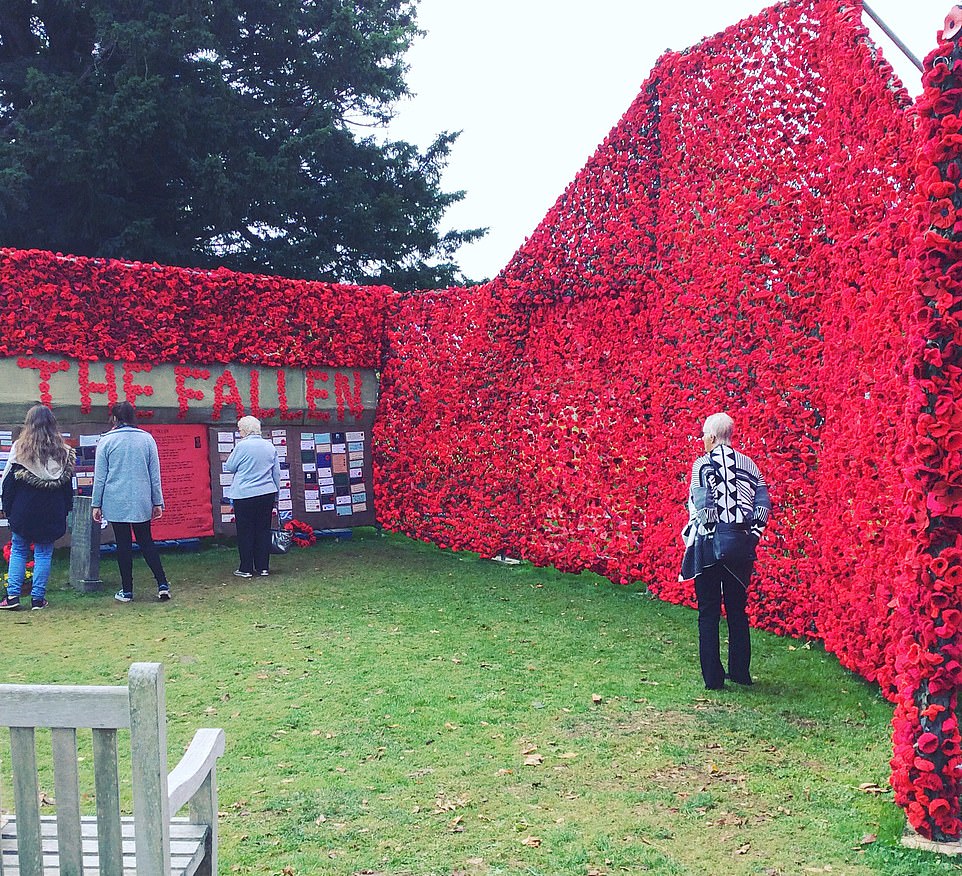 Hayling Island in Hants remembers the dead with a project in which 18,000  poppies were crocheted and knitted to decorate St Peter’s Church 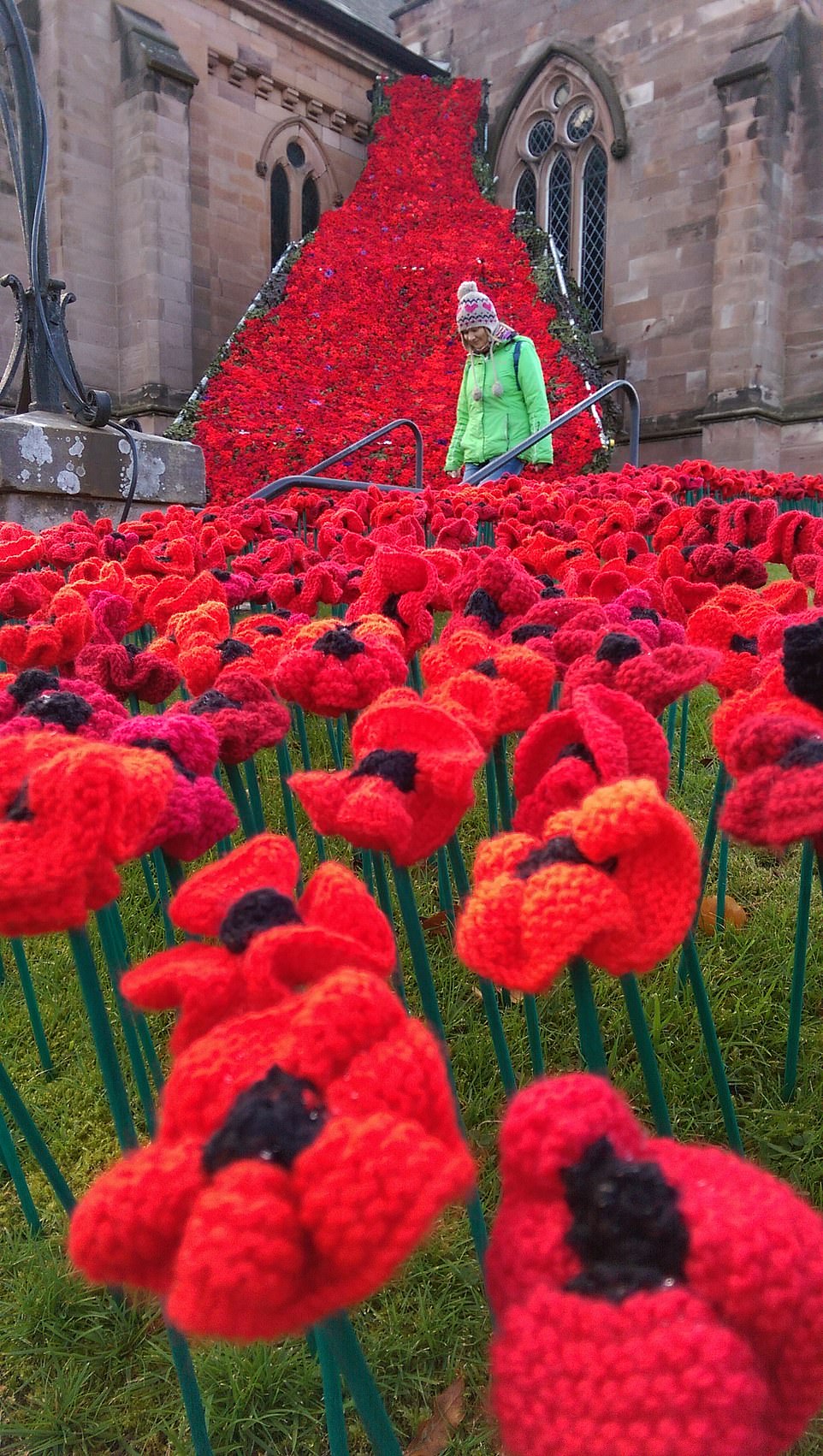 A total of 13,000 poppies cascading from the roof to the ground in Keswick , Cumbria, to commemorate the fallen soldiers 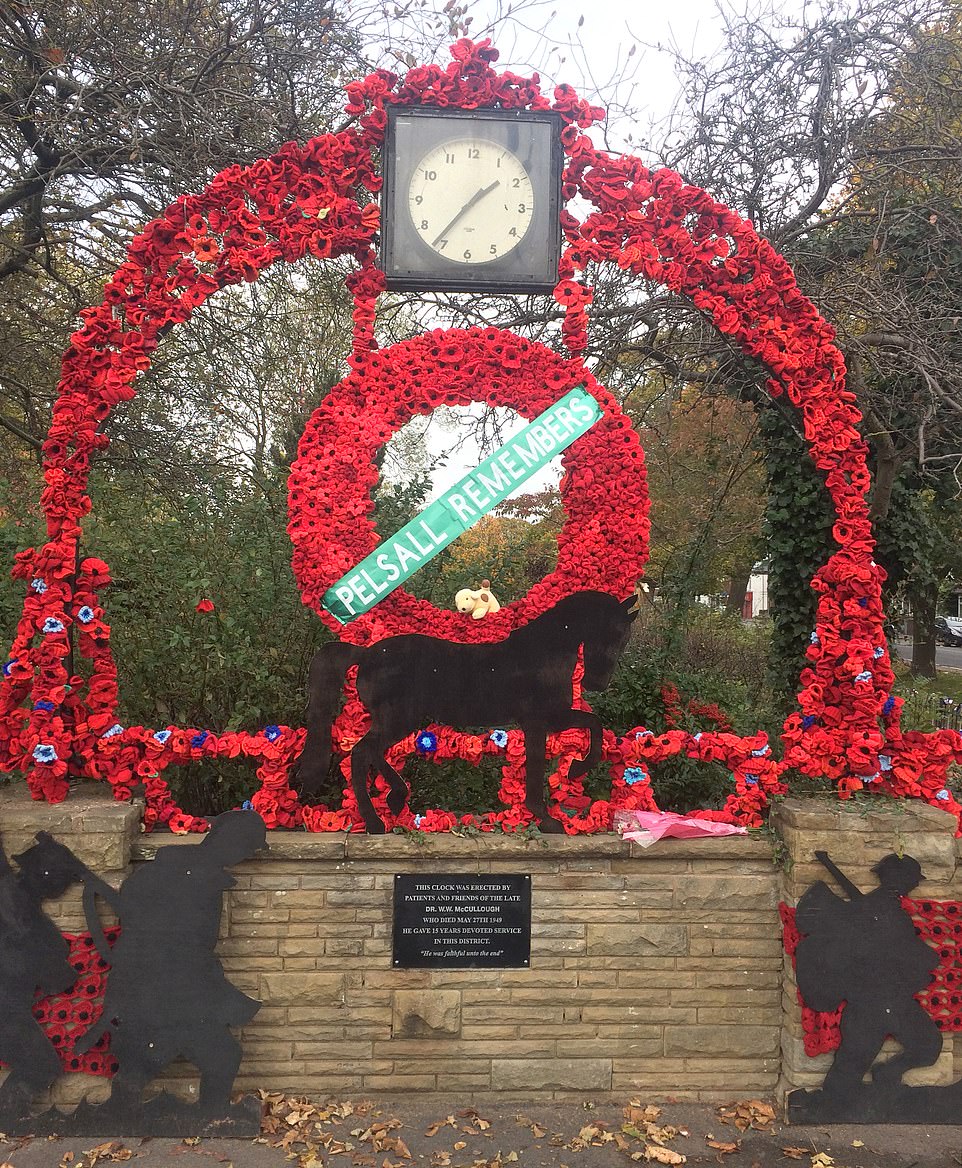 This poppy tribute was erected in Pelsall Village, West Midlands, as the nation pays tributes to those who fought and died

The school closed in 1994 and there is no one left who actually knew most of these dead soldiers, yet with each year I find it harder to keep a quaver from my voice.

We have reached the centenary of the 1918 Armistice. How much longer, as a country, will we continue to mourn casualties of a war that is now as distant from us as the Battle of Waterloo was from them?

Is ‘mourning’ even the right word for what we do with our red poppies and our rolls of honour? Or is this something more deeply rooted?

Remembrance Day chimes with the British autumn. The dolefulness of this Sunday’s civic gatherings around the country will be matched by November’s leaf-fall and a general dankness in the air.

It is a day for greatcoats and hats and the stamp of black shoes on cold flagstones and gravel paths, when a smell of soil and decay is on the churchyard breeze.

That the Great War ended on November 11 was strategic happenstance, but the date — the 11th of the 11th — had a poetry to it and it pretty much coincided with the ancient festivals of Hallowe’en and All Souls’ Day. 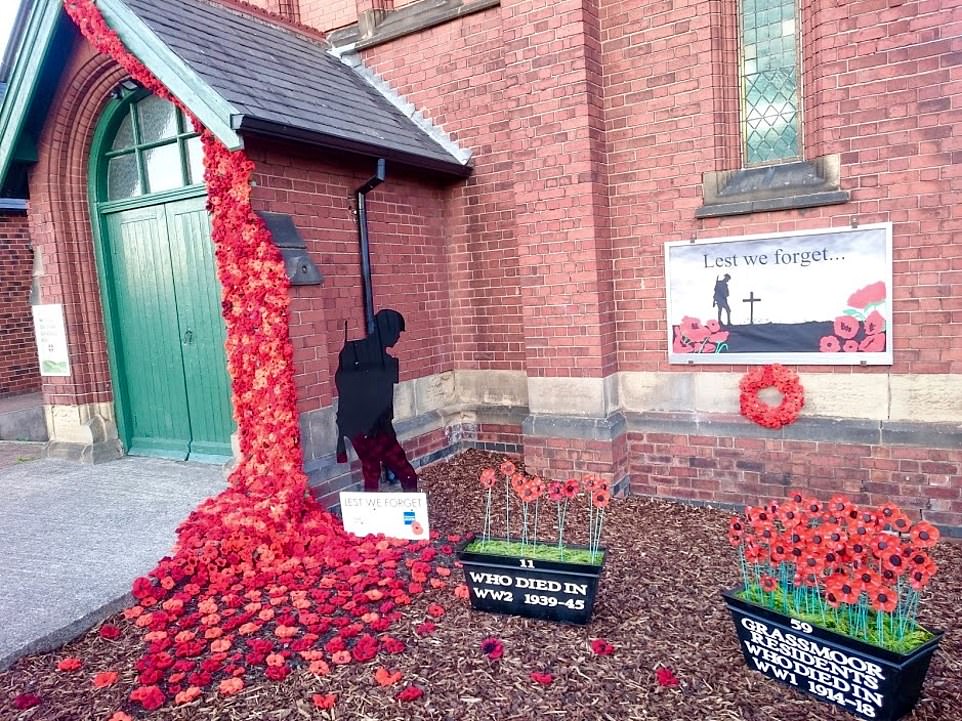 Grassmoor Craft Group in Derbyshire displayed nearly 2,000 poppies in the heart of the village, commemorating the end of WW1

From earliest times this was when the Celtic inhabitants of our isles contemplated death and those they had lost. I have never been to a Remembrance Service in the southern hemisphere, where it is springtime and Nature is bursting out all over, but it must have a very different flavour.

How do you spend Poppy Day? Do you attend your local parade or do you watch TV coverage of the national ceremony in London, where the Queen and her prime ministers, present and past, lay wreaths at the Cenotaph?

I went to the London event once, to stand in the crowds on Parliament Square and watch the old soldiers march past, elderly men still bristling with comradely pride. It gave one a rare sense of nationhood and of what the Armed Forces do for our parliamentary kingdom.

Most years, though, I have spent Remembrance Day at ceremonies in Gloucestershire and Herefordshire. The hymns reach into our innards: Abide With Me, O Valiant Hearts or Parry’s setting of the Tennyson poem Crossing The Bar.

Laurence Binyon’s words, ‘they shall grow not old as we that are left grow old’, catch the theft of youth from those who died in war and those of us now being bent by age.

There is the march-past by the local branch of the Royal British Legion, medals swinging on lapels and veterans juddering to attention in defiance of the years. That these veterans include familiar faces — neighbours suddenly transformed by wearing their old colours — accentuates the Forces’ local links. 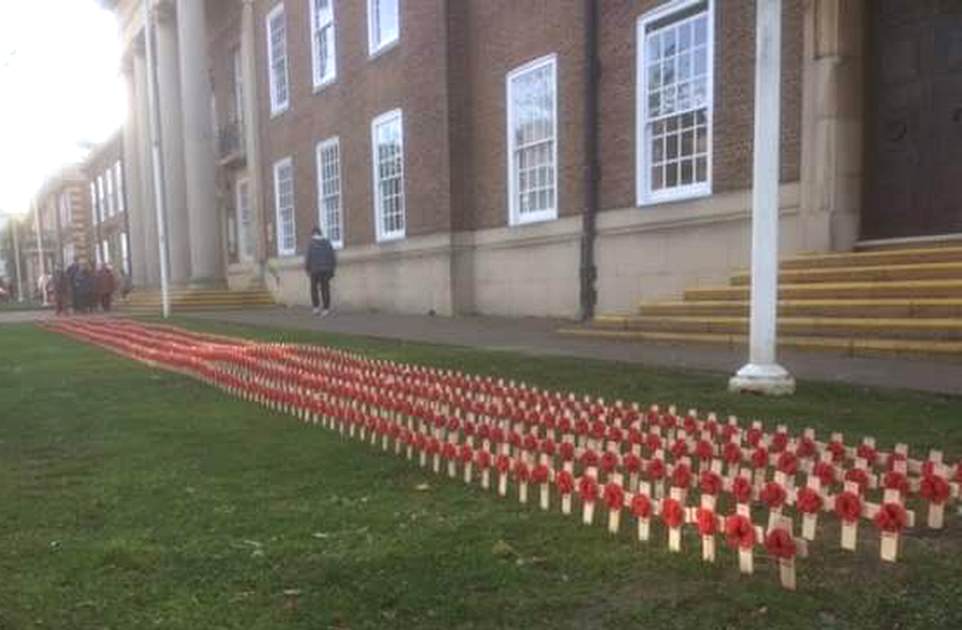 The dead come often from the county regiments. From the war memorial lists you hear local surnames — in our part of Herefordshire six members of the Lee family, still prominent in the village — and that makes the years telescope and 20th century sacrifices seem closer.

Then comes the two-minute silence, when all you can hear is the wind at your ears and the occasional sniffle from someone who has found it all too much. The Last Post may be trumpeted less than faultlessly, but the blend of earnest imperfection and shared solemnity can be immensely powerful.

So many of those who died were just farmhands from nearby fields, unsuspecting lads who exchanged spades and ploughs for rifles and howitzers. 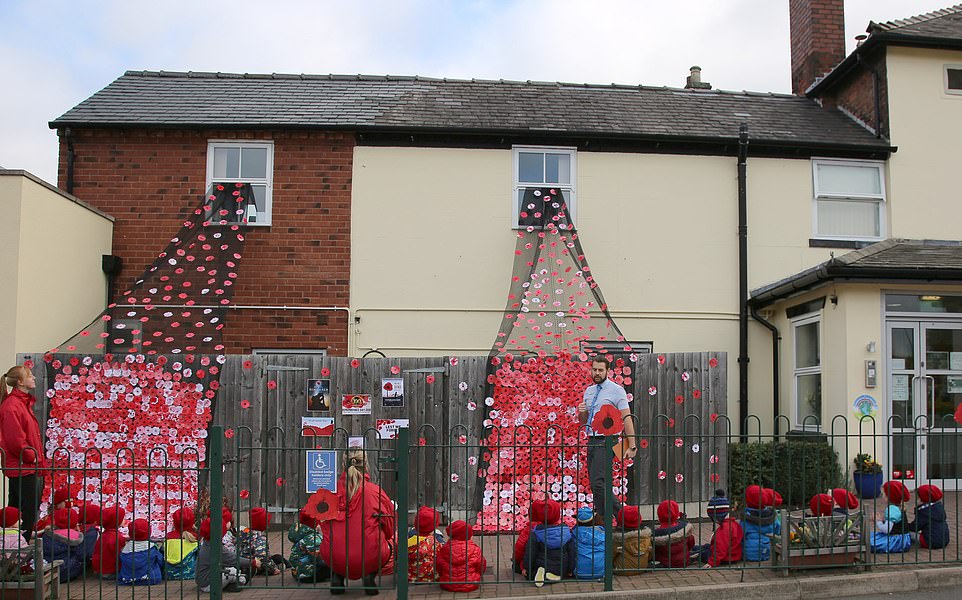 Pre-School children listening to a story about why we mark the 11th November with poppies. All the children and staff were involved in making the poppies for the display at Humpty Dumpty Day Nurseries & Pre-Schools in Lichfield

Some people find Remembrance Day too militaristic. They are entitled to their view, but there is a difference between enlightened patriotism, which is a fine thing, and triumphant nationalism, which has no place at any church service or, for that matter, elsewhere.

In the list of fallen former pupils that I read every year, there is one, Ahrens, who was a German who died while fighting against us.

He may have been ‘the enemy’, yet we honour him as an equal before God, a man no less patriotic and unfortunate than our British troops. War is hellish for both sides. 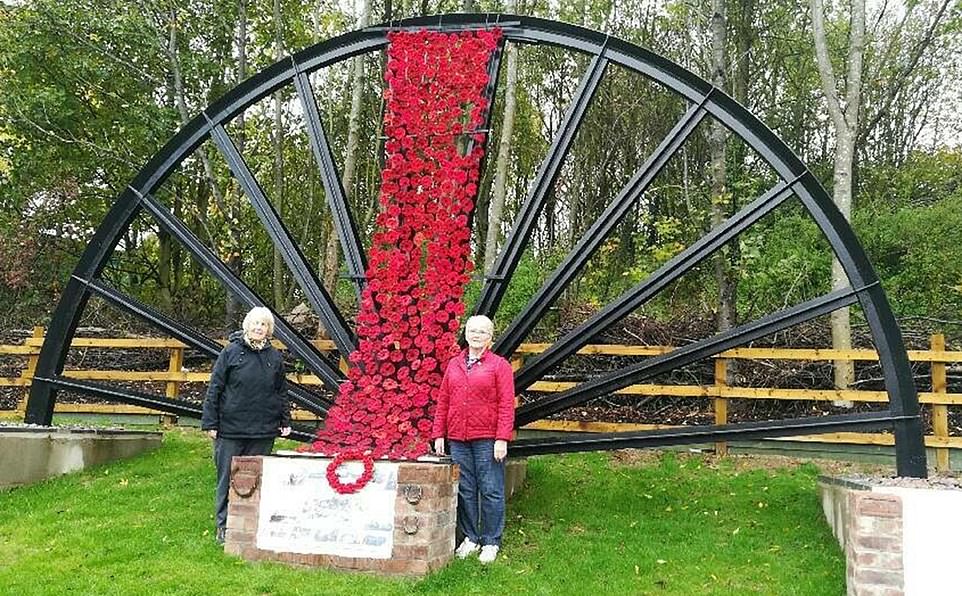 The people of Clowne, Derbishire,  have crafted a poppy display to adorn their memorial wheel as the centenary approaches in coming days

On Sunday, the President of Germany, Frank-Walter Steinmeier, will lay a wreath at the Cenotaph. Some who lived through the war are opposed to his presence. I, born post-war, can only welcome it as a further moment of reconciliation between us.

Then there are those who choose to wear pacifist white poppies. Intellectually I might question their stance — are they saying they would never fight evil? — but emotionally it is hard to condemn their idealism. What did our grandfathers fight for, particularly in the war against Hitler, if not the right to hold contrary views?

My mother, in her 80s, finds it harder to bite her tongue about pacifism. Her father was a British Army sapper who landed at D-Day and dashingly fought his way east through to Germany, running into a few lumps of shrapnel en route. He died in 1949, partly of his wounds, and my mother’s childhood was wrecked by that war. 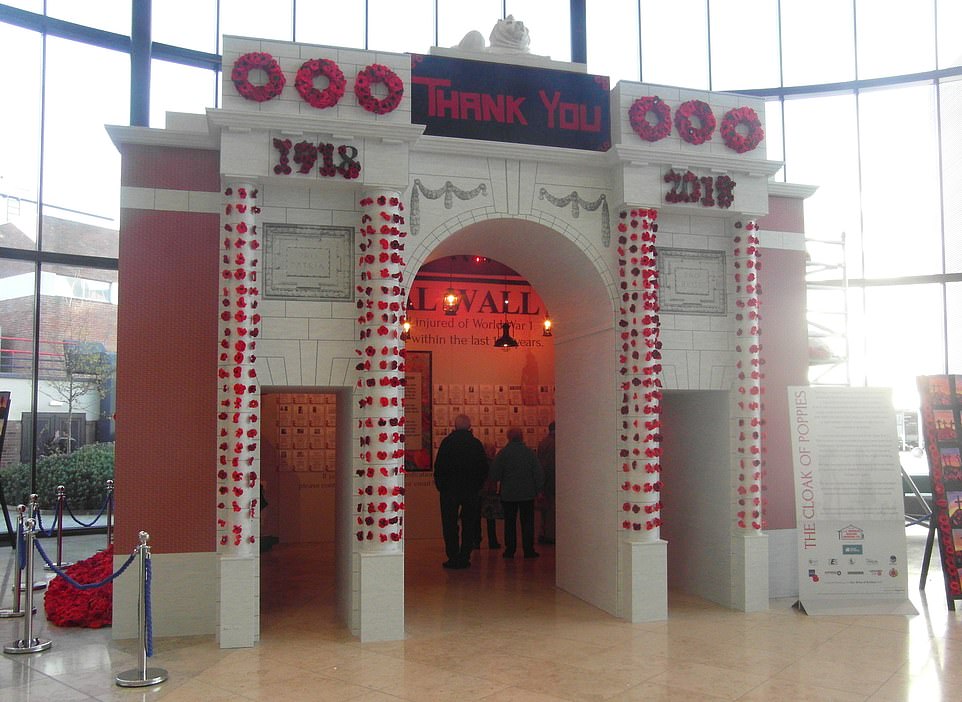 Remembrance Sunday is not easy for her, yet she stands with her gloved hands gripped tight, defying the raw memories that must make her want to gasp. The formality of Remembrance Sunday’s ceremonial, with its spare, stark words and its wind- whistling silence, is very British in its emotional restraint.

Do WE romanticise those and other wars? Do we cast back longingly to a less complicated time, when stalwart women and men did not hesitate to make sacrifices for king and country?

It seems we mark the day more now than 30 years ago. Amid today’s zingy restlessness maybe Remembrance Day reflects a need for occasional acts of communal melancholy.

There must come a time when we will place less emphasis on the world wars and focus instead on loved ones we have lost in the previous year. I can see it would make sense for Remembrance Sunday eventually to become an All Souls Sunday. But I don’t sense that moment has yet arrived.

A hundred years on, the story of the Western Front continues to grip our imagination. So, on Sunday, I will recite once again that sorrowful list of the unforgotten fallen whom we never knew.