The nation’s governing body for golf is lobbying the Victorian government to lift a ban stopping players from accessing club toilets in areas in lockdown.

Golf Australia general manager David Gallichio, in a letter to clubs and facilities on Wednesday, said that although golfers were this week allowed back on the greens in Melbourne, the Mitchell Shire and the Latrobe Valley, toilets “must remain closed at your facility”. 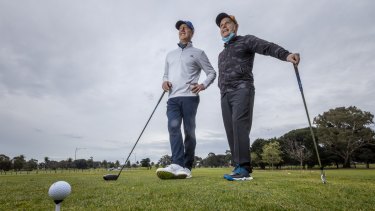 Southbank resident Tim Noonan (left), with Bruce Miller, is among those who think there must be a way for people to be able to access club toilets safely. Credit:Wayne Taylor

“This is different from previous advice received on this topic, and [Golf Australia] will make urgent representations to government on this point as we understand full well that this is a significant impost,” Mr Gallichio said.

Some of Victoria’s COVID-19 restrictions eased at 11.59pm on Tuesday. The travel limit for metropolitan Melbourne and the Mitchell Shire increased to 15 kilometres, and certain outdoor sports resumed, including golf, tennis and boating.

Albert Park Golf Course’s resident pro David Diaz said while the toilet ban was “quite ridiculous”, “nothing amazes me any more”. At least with Albert Park, there were plenty of public toilets around for players to use.

“I know some courses, they have to lock their toilets. It’s just odd,” he said.

“But anyway, we’re happy to get out there and play.”

Southbank resident Tim Noonan, who was playing the Albert Park course on Wednesday, thought that if people could use public toilets safely, they must be able to use club toilets safely, too. 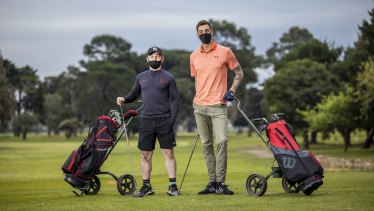 He said most clubs he knew of had alternative points of access so that players did not have to walk all the way through them to get to the bathrooms and change rooms.

He said it was a problem generally on many golf courses that there were not enough toilets for female golfers, but not having access to club toilets during lockdown was an even more imperative issue for women.

“As long as you put [up] the right signs and you ask people to do the right thing, [it would be OK],” Mr Noonan said.

“Also, most of the clubs are very encouraging of ‘no jab, no play’, so … you’re already asking for people to be vaccinated, so you’re already well down the pathway of managing it well and efficiently.”

St Kilda resident Shane Nolan, who was also at Albert Park on Wednesday, agreed the ban would particularly affect women, while noting it was a male-dominated sport. “Unfortunately, most blokes will probably just tip it in the trees by the sounds of things,” he said.

“I can understand why anyone would have a hang up on it; it’s a bit ridiculous to say that you can’t have access to a toilet.

“I understand that it’s COVID and stuff like that, but what are you supposed to do for four hours?”

The Department of Health has been contacted for comment.

The PGA of Australia said it was not in a position to comment, given it was not the governing body that oversees golf clubs and facilities.