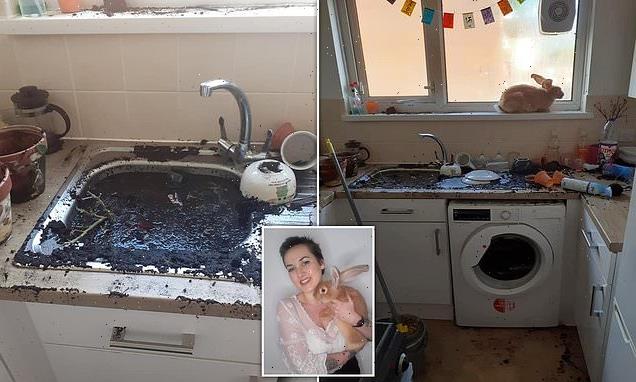 Hopping mad! Rampaging RABBIT blocks sink with soil after eating owner’s 12 houseplants and then floods kitchen by turning on the tap

A naughty rabbit left his owner hopping mad after wreaking ‘absolute devastation’ by blocking the sink and flooding the kitchen.

Pet rabbit Dorothea had been munching on 12 houseplants which sat on the sunny windowsill.

But in getting to the good grub she knocked the pots into the sink, covering the plug hole with soil before turning on the tap.

Owner Pema Ferris, from Radcliffe, Greater Manchester, returned home on May 18 to ‘a nightmare’.

The 24-year-old said: ‘I just popped out for a little while and just came home to absolute devastation.

‘I opened the door and there was water all over the floor, the tap was running and the sink was full of soil – it was a nightmare. 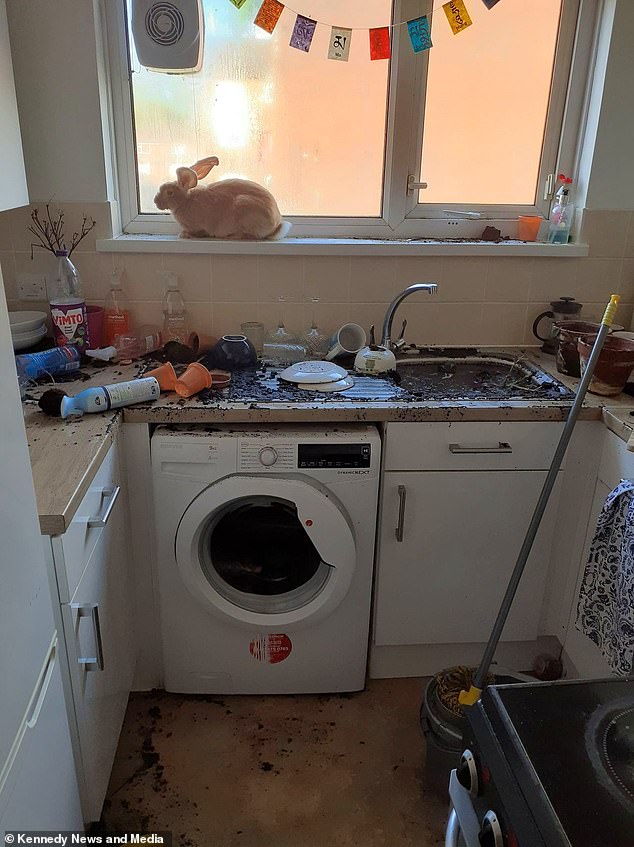 Pet rabbit Dorothea knocked the houseplant pots into the sink, covering the plug hole with soil before turning on the tap and flooding the kitchen 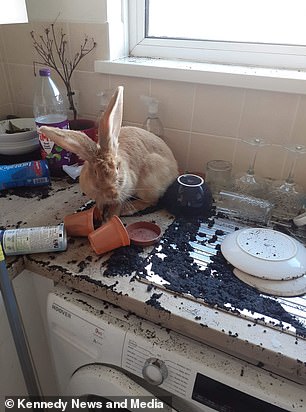 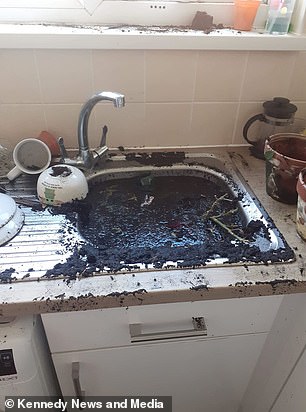 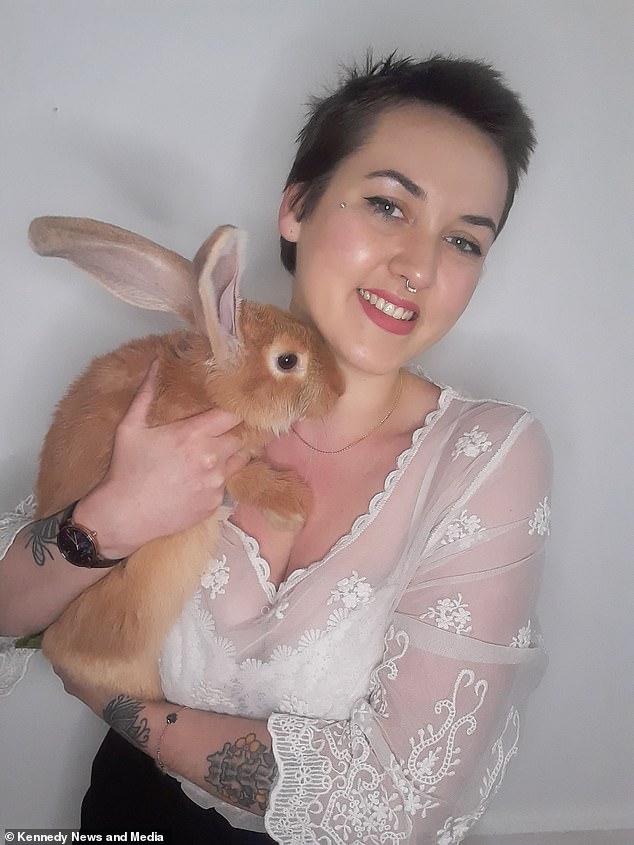 To make matters worse, the mum-of-one then had to rush continental giant breed Dorothea to the vet after she snacked on poisonous plants

A hilarious photo shows the continental giant Dorothea sat sheepishly on top of the kitchen worktop where she had jumped up to munch on the potted plants – surrounded by mud, soil and a flooded sink.

The mum-of-one added: ‘Initially I was very worried about the rabbit and the whole devastation of ‘oh my gosh, my kitchen – has the water got into the electrics? Is anything ruined?’

‘My other rabbit is the most well behaved one in the world and he lured me into a false sense of security thinking all rabbits would be this well behaved and then I got Dorothea.’

To make matters worse, the mum-of-one then had to rush continental giant Dorothea to the vet.

The hungry rabbit had not only munched on a toxic aloe vera cactus, but had also tucked in to a tomato plant – both of which had been put on the windowsill to keep them out of the rabbits’ reach.

The greens of this particular shrubbery contain a poison called Solanine and if eaten can prove deadly to rabbits.

The bartender dashed to the out of hours vet to have Dorothea checked over and after a five-hour wait was given a clean bill of health. 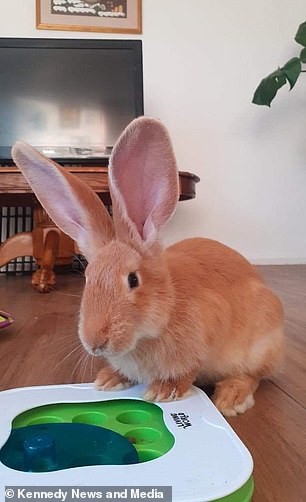 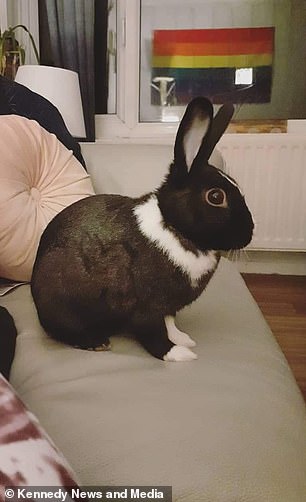 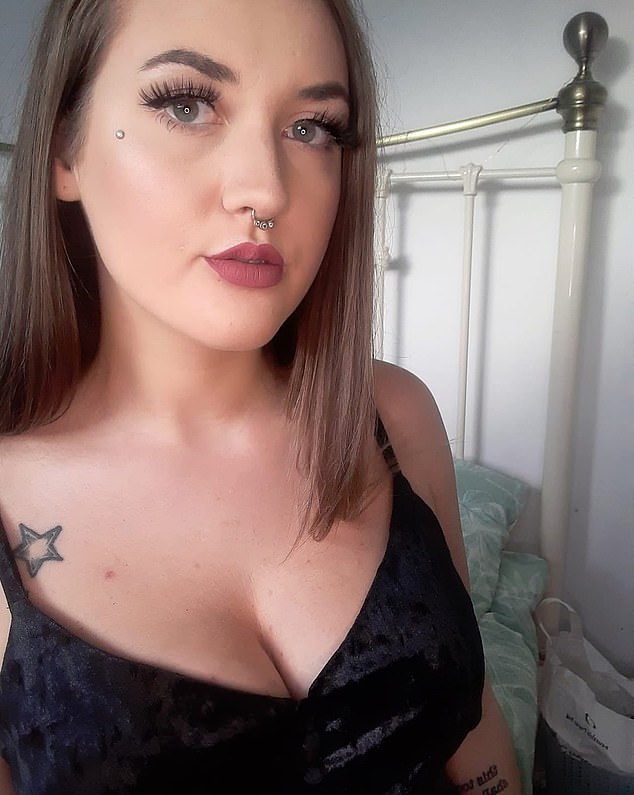 Ms Ferris eventually arrived home at 11:30pm where it took her a further two hours to clean up

Ms Ferris eventually arrived home at 11:30pm where it took her a further two hours to clean up.

Bartender Ms Ferris said: ‘The aloe vera and tomato plant can be dangerous to rabbits so I went and got her checked over and luckily she was absolutely fine – there was no harm done.

‘There was water all over the floor and there was a good puddle underneath the fridge, oven and cupboards – a lot of the things that were in my cupboards had been ruined.

‘She’s quite cheeky and mischievous and is growing into a very big rabbit – she’s normally a good girl so I’m quite shocked that she’s done this.

‘She’s now banned from the kitchen and the rest of my house is rabbit proof already so hopefully we’ll have no more accidents.

‘But I definitely won’t be having anymore houseplants and it will be plastic ones for now I think.’