Racist, 56, who turned his north Devon home into a bomb-making factory full of explosives and hate-filled diaries against Lenny Henry and Dawn French is jailed for 40 months 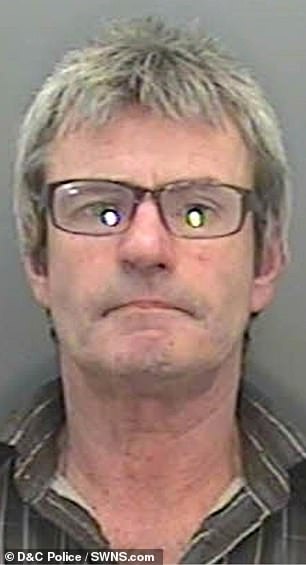 Steven Bracher, 56, secretly stockpiled an arsenal of bombs, over a hundred bottles of chemicals, and weapons, including machetes, knives, an axe, air pistols, catapults, and hooks at his home in Devon

A racist who turned his home into a bomb-making factory full of explosives and diaries filled with hateful messages about Lenny Henry and Dawn French has been jailed.

Steven Bracher, 56, stockpiled an arsenal of bombs, more than 100 bottles of chemicals, and weapons, including machetes, knives, an axe, air pistols, catapults, and hooks at his home in Bishop Tawton, Devon.

The N-word was regularly used and he expressed anger towards the former couple’s relationship.

He referred to Mr Henry as ‘nasty’ and criticised Ms French for her relationship with him, calling her ‘an insult to decent white folk’.

They had to take the fertiliser bomb to Dartmoor to blow it up safely. 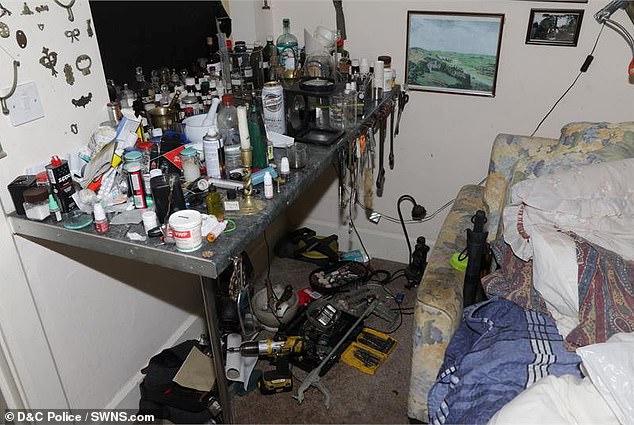 Pictured: Bracher kept an arsenal of homemade bombs, weapons and chemicals at his house in Devon 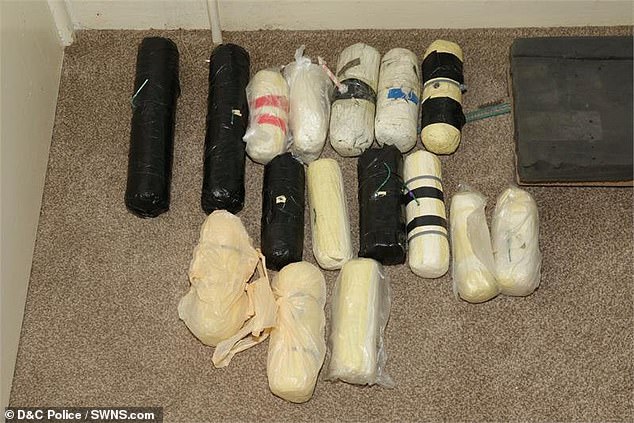 Judge David Evans said: ‘Amongst the somewhat rambling entries in the notebook were clear expressions of racist and homophobic attitudes and expressions of aggressive hostility to other groups in society.’

He added that the explosives had ‘the potential for death or serious injury’.

Bracher was described by police as somebody who had ‘disassociated himself’ from society.

He was a drug addict who used chemicals to make illegal substances at home.

The defendant lived alone in a historic almshouse in the Devon village, with a small circle of friends.

He was unemployed, enjoyed metal detecting and had a fascination with explosives – or as he called them ‘fireworks’.

On January 24 this year he went to Boots in Barnstaple and told them he had lost his Subutex medication – the drug used as a legal substitute for addicts.

He was searched by security who found a knife on him. Police were called and Bracher produced a test tube size container with black powder in it which turned out to be gunpowder.

While he was taken to the station police searched his home and were shocked by what they found. 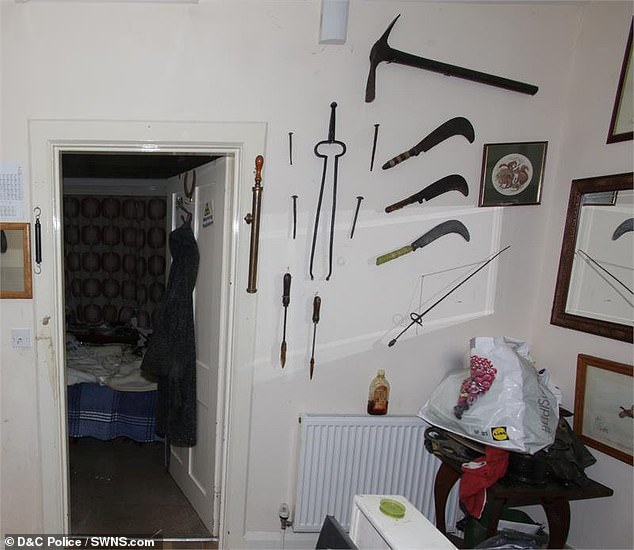 Weapons were mounted on the wall of Bracher’s home, where he hid diaries full of hateful messages about celebrities Lenny Henry and his ex-wife Dawn French

They discovered IEDs and bottles of chemicals scattered around the scruffy looking room he slept in, which resulted in Royal Navy bomb disposal experts being drafted in.

Detective Inspector Phil Gray, who led the investigation, said: ‘The devices located were all viable devices and the scene was closed down.

‘At no point were the public at risk from the explosives. We did not evacuate the nearby school which backed onto the garden on the advice of the Explosive Ordnance Department.’

The bomb experts were certain the stone wall at the rear of the property would have contained any blast within the property.

The bomb squad spent three days at the address combing it for devices and assessing the extent of the find. They also made the explosives safe.

Experts from a forensic explosive laboratory in Kent also came down to assist the operation. 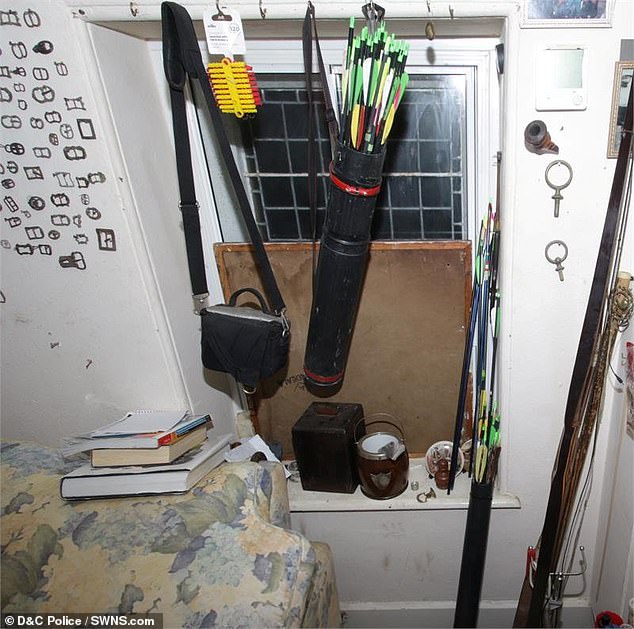 Bracher was jailed three years and four months at Exeter Crown Court for three counts of having explosive devices, one of possessing a knife in public and one of possessing amphetamine. Pictured: Weapons and diaries found inside Bracher’s home

Some of the IEDs were made using metal table legs with the end sealed by 10 pence pieces and fuses attached. Inside was a combination of potassium nitrate, sulphur and charcoal.

Others were assembled using cardboard tubes with cork stoppers and firework inside.

They would have been dangerous when detonated, particularly in confined spaces, and would have sent shrapnel and fragments into the air, the court heard.

Police found a bucket under his bed which had a mixture of ammonium nitrate and fuel oil known as ANFO inside.

The substance was effectively a 9kg bomb, the largest explosive found at the property. It was later taken to a military firing range on Dartmoor and safely detonated.

A number of crossbows and other weaponry was also found at the property. On the walls were maps, small metal items, and a chemical periodic table.

Police were initially concerned the maps represented the location of stockpiles but it turned out Bracher had a harmless hobby of metal detecting and the items on the walls were mostly his farm tool finds.

‘Available to him he had an arsenal which could have been devastating if used,’ he said, describing Bracher’s home as a ‘makeshift chemical laboratory’. 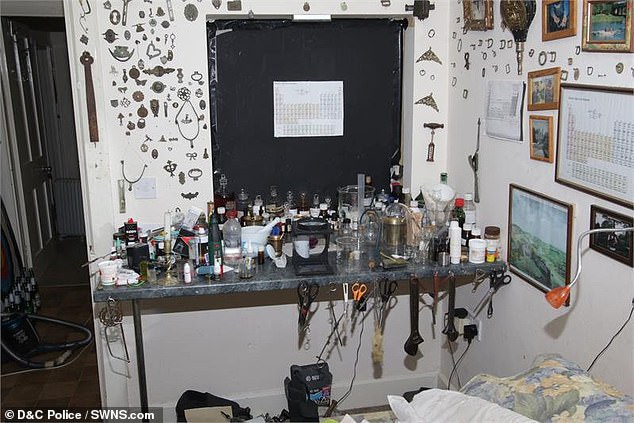 Scissors, weapons and explosive devices were found all over Bracher’s flat

Drugs were also found at the property. Police found a white substance in the microwave where Bracher was trying to cook up crystal meth.

Detectives say he had an extensive self-taught knowledge of chemicals and how to make explosives but probably not the knowledge to make crystal meth.

The chemicals, which included hydrochloric acid, could have been used as poisons but police think Bracher collected them in connection with his crystal meth and bomb making activity.

‘Bracher is an individual who, from what we can tell, has disassociated himself from general society, although he has a small circle of people he would see,’ said DI Gray.

His diaries read: ‘I believe in freedom of speech,’ before he went on to list insulting names for people based on their race.

‘His views are extremely concerning,’ said DI Gray. ‘They were against society generally. They made hard reading. 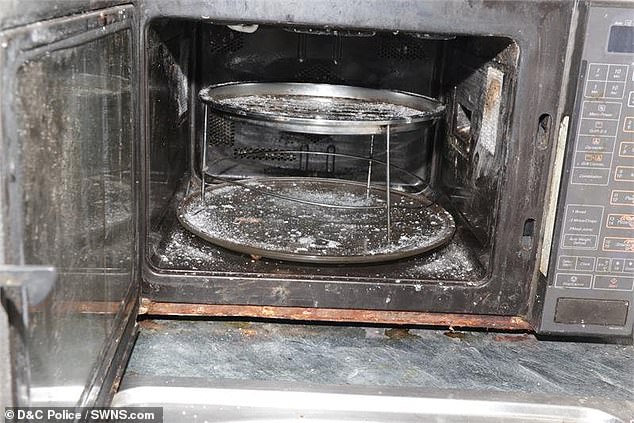 Drugs were also found at Bracher’s property. Police found a white substance in the microwave where Bracher was trying to cook up crystal meth

‘Initially the question was raised about terrorism but I can tell you at no point was this treated as a terrorist-related incident.

‘All the chemicals and IED were recovered and removed. Without our partners we wouldn’t have been in the position we are today.

‘In the first week of the investigation myself and the team were under immense pressure because of the scrutiny applied to the incident and it is a testament to the work of the team in getting sufficient evidence that we got these early charges and Bracher into custody.’

DI Gray said Bracher was cooperative with police after his arrest.

‘The language he uses is very different to ours in this matter,’ he said. ‘In his mind they are fireworks and he was making fireworks whereas to us they are clearly explosives.

‘There is a danger in that he does not understand what potentially he was doing. The potential of what he could have done is quite extensive.

‘He’s more fascinated in making explosives, taking them away and seeing them go bang.’ 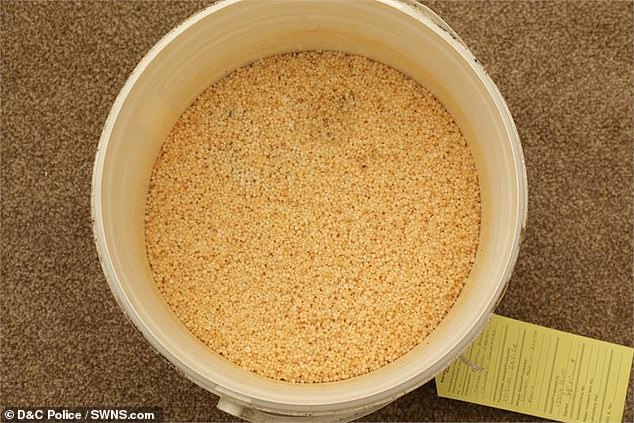 Police also found a bucket under his bed (pictured) Inside the bucket was a mixture of ammonium nitrate and fuel oil known as ANFO, effectively making it a 9kg bomb

Police do not believe Bracher bought the weapons illegally and probably stockpiled them over years. He did not own a computer and had a hand injury from a previous explosion.

He had previous convictions dating back to the 1980s for offences including possessing an offensive weapon in public and using threatening words and behaviour.

He does not suffer from psychiatric problems but had drunk heavily and taken drugs. He liked wildlife and had won an award for his interest in nature.

He had also made some significant archaeological finds, that had been reported on by local media.

His opiate addiction started when he was given medication for arthritis and this had got out of control by the time of the offence. He told police the rants in his notebook were ‘silly’ and he would not have harmed anyone.

Bracher said he had a long standing interest with pyrotechnics and the hoarding was part of a ‘great experiment’ and fascination with fireworks.

Judge Evans said there was no sensible explanation for having the combination of items in that ratio other than to make high explosives. 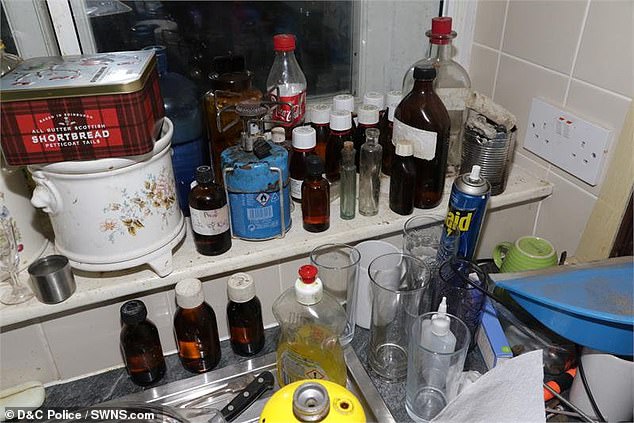 Pictured: Bracher kept an arsenal of homemade bombs, weapons and chemicals at his house in Devon

‘If you had chosen to detonate that mix or somebody else had got their hands on it the potential for death and serious personal injury is obvious.’

He said the defendant had a cavalier attitude to the risk of explosives which may explain why he had a 9kg bomb under his bed.

‘The maximum sentence for the explosive offences is life imprisonment,’ said the judge.

He said the motivation may have come from a ‘childish delight’ in watching bangers explode but his behavior had developed into something more disturbing.

Judge Evans said he had considered whether the defendant was a significant risk or danger to the public.

He said he could not impose an extended sentence but the possession and manufacture of explosives by someone who was an addict and had hostile attitude to others made him a danger to the public.