It’s not exactly Maverick and Goose! RAF fliers nicknamed ‘Doorknob’ and ‘Bamber’ take Tornado for its last ever flight after nearly 40 years in service

The RAF Tornado has completed its final flight after nearly 40 years in service.

The single supersonic jet flew over a disbandment ceremony for its last two squadrons at RAF Marham in Norfolk today.

A pilot and navigator nicknamed ‘Doorknob’ and ‘Bamber’ steered the plane for its final flypast as members of the two squadrons watched it roar overhead.

First entering service in 1980, the jets have been used in operations across the world, most recently bombarding ISIS with air-to-ground missiles pushing the terrorist group back through Syria and Iraq. 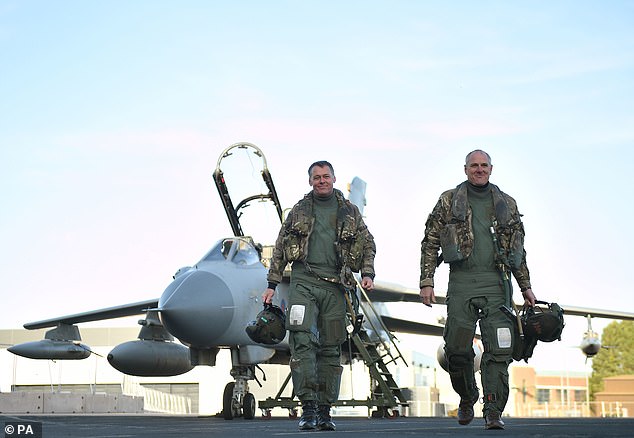 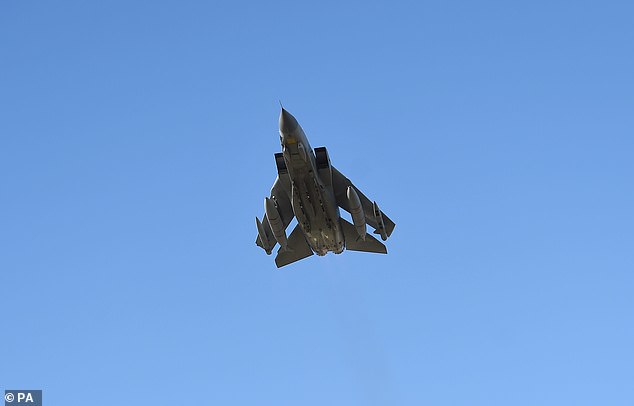 A final flypast of a single Tornado aircraft takes place over RAF Marham in Norfolk, during a disbandment parade for the final two Tornado Squadrons 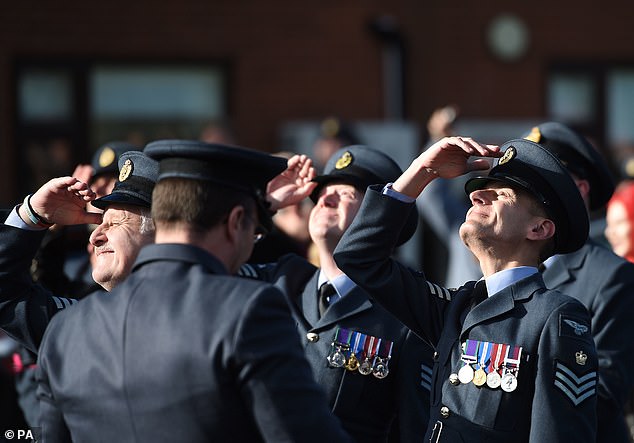 Squadron leader Ian ‘Doorknob’ Dornan, the pilot for the Tornado’s final flight, described it as an ‘absolute honour and a privilege’.

‘It’s really when I think about all the aircrew that have gone before me and all the engineers that have made it possible to put the jet in the air,’ he said.

‘It’s sometimes sad as well as I’ve a few friends who didn’t make it back, but very humbling and very honoured to fly the last mission.’

Squadron leader Stephen ‘Bamber’ Beardmore, who was in the back seat as navigator, said: ‘It’s been a long career for me flying Tornado and it’s kind of like a pair of old slippers.

‘I think I just got used to it and it’s been very fulfilling.

‘It’s a sad day to move on but I think it’s time to move on.

‘The aircraft has now come to the end of its service life and there are newer things to do and newer capabilities to service with newer aircraft.’

First entering service in 1979, the supersonic jets have been used in operations across the world, most recently bombarding ISIS with air-to-ground missiles pushing the terrorist group back through Syria and Iraq.

The capabilities of the Tornados are now being delivered by RAF Typhoon jets.

Under ‘Project Centurion’, worth £425million over the past three years, the Typhoon can now launch the Meteor air-to-air missile, the Stormshadow deep strike cruise missile and the precision attack missile Brimstone.

When the Typhoon was first introduced it was not equipped to carry the Brimstone missile.

Tornados were used more than Typhoons during Nato air strikes in Libya in 2011 because they equipped with Brimstone and the latest 500lb Paveway IV laser- and GPS-guided bombs.

The Tornados flew their final operational sortie on January 31 and returned to the UK from RAF Akrotiri in Cyprus last month.

The head of the RAF, Air Chief Marshal Sir Stephen Hillier, Chief of the Air Staff, watched the jet taxi in for the last time and said it was a ‘hugely significant moment in the RAF’s history’. 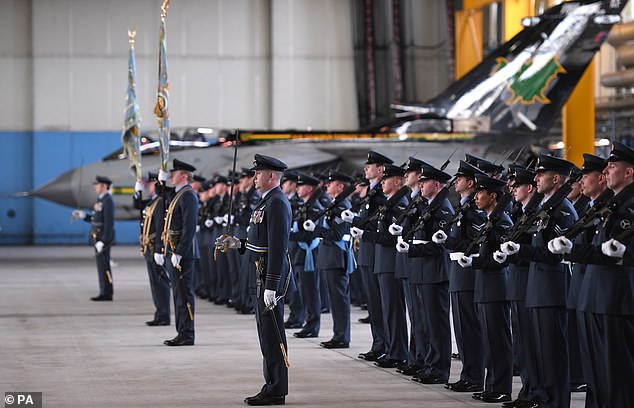 A disbandment parade takes place for the final two Tornado Squadrons at RAF Marham today. The jets were latterly used to bombard ISIS in Syria and Iraq 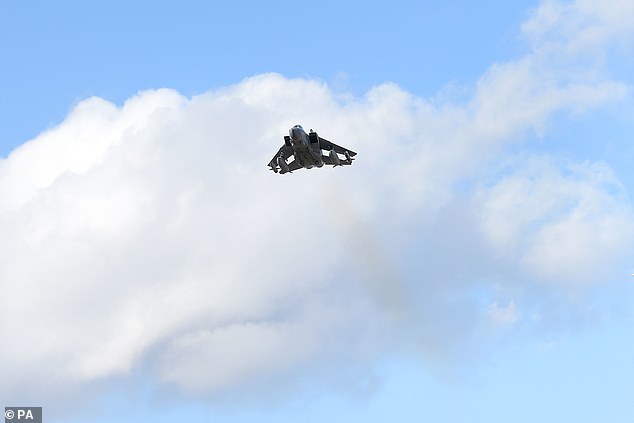 The single aircraft flies over RAF Marham today. Squadron leader Ian ‘Doorknob’ Dornan, the pilot for the Tornado’s final flight, described it as an ‘absolute honour and a privilege’

‘The Tornado has been the greatest part of my RAF career and so if my eyes are just a little bit glassy it’s not just down to the wind that’s blowing today here at Marham.’

Station Commander Group Captain Ian ‘Cab’ Townsend said: ‘I think the wave of emotion when those two engines shut down from the last sortie tells you everything you need to know.’

The two squadrons at the disbandment parade were 9 Squadron and 31 Squadron.

The world’s first operational Tornado squadron, 9 Squadron, had operated the aircraft since 1982. It will be stood up again as a Typhoon squadron at RAF Lossiemouth in Scotland. 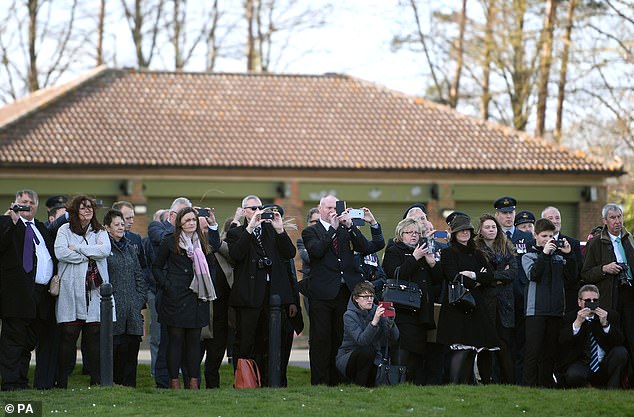 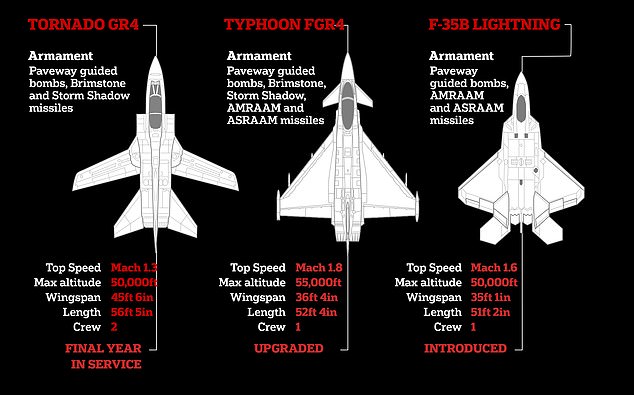 The RAF is modernising its fleet as the Tornado reaches the end of its 40-year service. The Typhoon can now carry the powerful Brimstone bombs which were formerly the preserve of the Tornado, and the stealth F35 Lightningtook to the skies for the first time last month

31 Squadron, known as the Goldstars, operated the Tornado since 1984. It is set to be stood up again to operate Protector drones.

The Tornado programme was initiated in 1968, and the first prototype flew on 14 August 1974.

The initial RAF requirement was for 220 aircraft, and the first of these was delivered to RAF Cottesmore in July 1980, becoming the mainstay of the RAF strike force in June 1982.

RAF Tornados took part in the 1999 Kosovo war and the GR4 upgrade was completed in time for Operation Telic, the UK’s deployment in Iraq from 2003 to 2011.

Tornados were used in Afghanistan from 2009 until the withdrawal of UK forces in 2014. According to the Ministry of Defence, they flew over 5,000 sorties and logged more than 33,500 flight hours during this time. 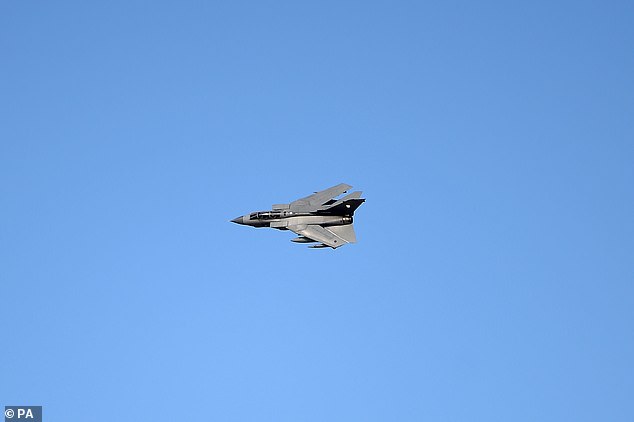 The last Tornado flight takes place in Norfolk today. The jets were used in Afghanistan from 2009 until the withdrawal of UK forces in 2014 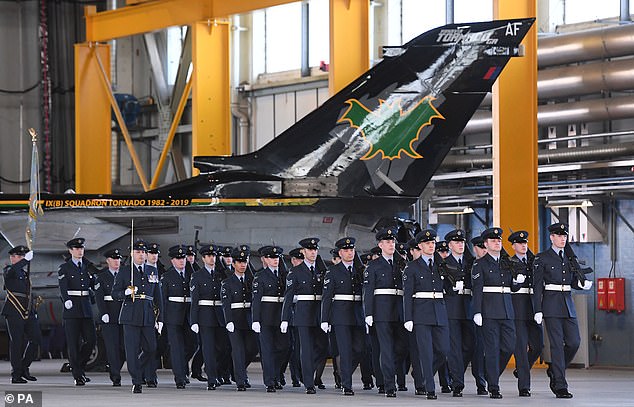 Personnel march onto the parade square today. The Tornados flew their final operational sortie on January 31 and returned to the UK from RAF Akrotiri in Cyprus last month