Ramraiders used a stolen tractor to smash a huge hole into the wall of a furniture shop in a sleepy village in a failed attempt to steal a cashpoint.

The bungling thieves attempted the brazen raid at about 4am this morning in The Square in Beaminster, Dorset, using the vehicle, which is believed to have been stolen from a nearby building site.

When the wall almost entirely caved in, the thieves left the cash machine in the rubble and abandoned a tractor and a stolen Land Rover, before fleeing the scene in a dark-coloured Audi. 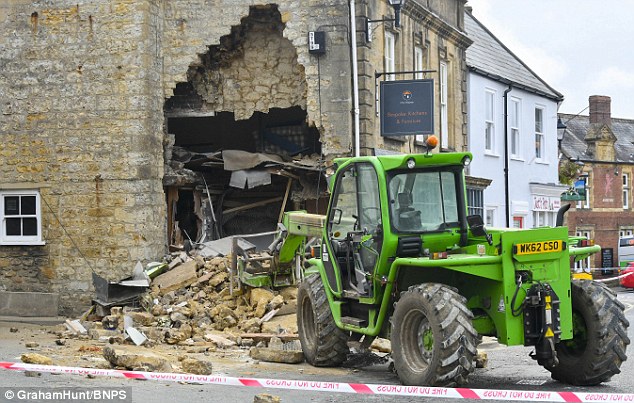 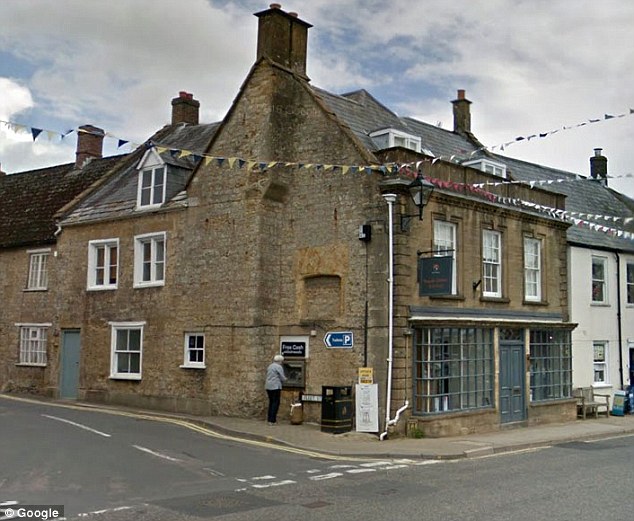 The ramraiders fled the scene after almost the entire wall collapsed. Pictured the cashpoint before the failed raid

Police confirmed they received multiple reports that thieves were attempting to steal the cashpoint at 4.09am.

Detective Sergeant Simon Austin, of Weymouth CID, said: ‘A full investigation is underway to identify the offenders involved in this incident.

‘I would urge anyone who saw or heard anything suspicious in the early hours of this morning in Beaminster and has yet to speak to officers to please contact Dorset Police.

‘I am also keen to hear from anyone who saw a Audi or similar looking car being driven in or around the area this morning or one that may have been abandoned.

‘The offenders have caused significant structural damage to the property and the road has been closed to ensure the safety of members of the public until it can be made safe. I would like to thank the community for their patience and understanding.’ 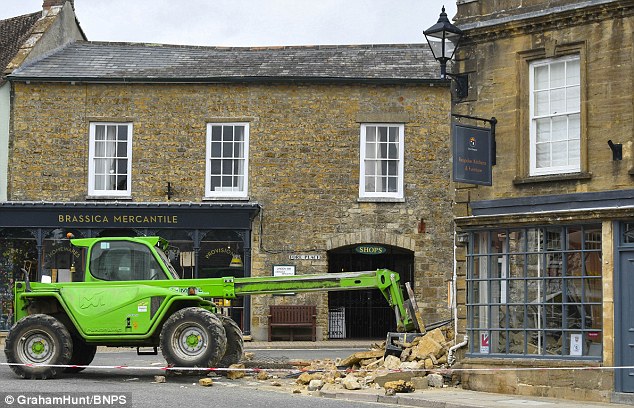 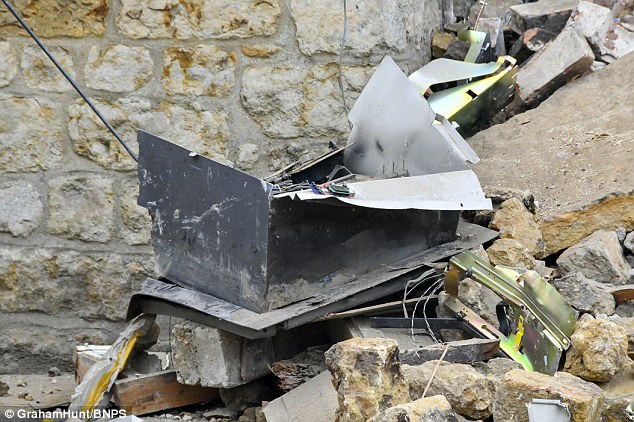 There has been significant structural damage caused to shop. Pictured, debris at the scene

The building used to be the town’s HSBC bank but is now a bespoke kitchen and furniture shop with a flat above, whose occupant escaped uninjured.

The road was closed so a structural engineer could assess the building and advise on how to make it safe.

Rachel Hayball, a dog behaviourist who lives nearby, discovered the mess as she went to get cash out at 6am.

Mrs Hayball, 33, said: ‘I’m amazed they targeted that cash machine of all the ones in west Dorset as it’s normally broken or has no cash in it.

‘The policeman told me they were lucky they didn’t pull the building down on top of them. And it doesn’t look like they got any cash.’

Louise Chidgey runs Brassica Restaurant and Brassica Mercantile specialist food shop, which are both opposite the damaged building, said: ‘I feel sorry for the poor woman that rents the flat as half her sitting room is coming out of the hole.