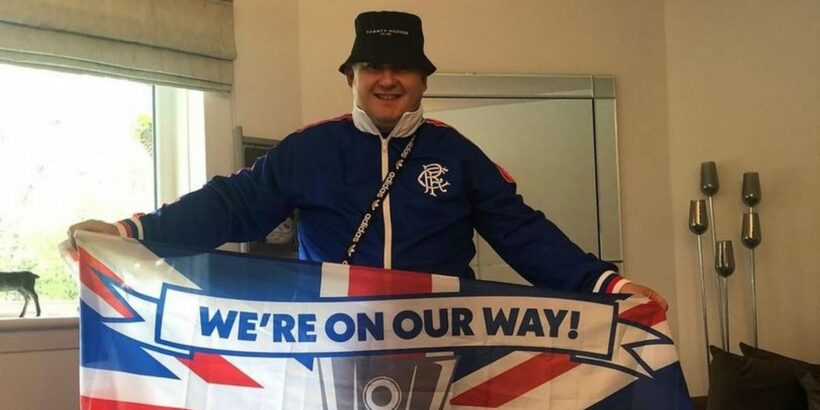 A red-faced Rangers fan splashed out nearly a grand on a one way ticket to Sevilla after he misplaced his passport and missed an initial flight that would take him to the Europa League final.

Kevin McLeod set off from his home in Loch Lomond, Scotland on Monday (May 16) and drove down to Manchester Airport for their flight to Gibraltar early on Tuesday morning.

But the 45-year-old's holiday was hit with a disaster when he realised his passport was missing, prompting a late night phone call to wife Dawn Adam.

The 'Gers fan and his pals raced back to Lancaster Services hoping to find his passport there and his wife called around businesses to see if anyone had handed the passport in.

Despite the late night search, a devastated Kevin couldn't find his passport, which he found when arriving back home at 7am in the footwell of his car.

The red-faced football fan hit a stroke of good luck when wife Dawn decided to buy the devastated fan a one-way ticket at the last minute, costing her a whopping £900, Daily Record reported.

The elated fan jetted off to the Spanish city, where further devastation was found after Rangers' chances of Europa League glory were dashed by Eintracht Frankfurt in a tense penalty shootout after a 1-1 draw.

Speaking of the nine-hour ordeal, Dawn said: "I told him not to panic and to go through his case, his man bag and to make sure everything was there. But it wasn’t and nobody could find it. It hadn’t fallen down the side of the seat, nothing.

"He thought it had to be at the service station so I started calling round BP, Costa, WH Smith, to see if anyone had handed it in while they drove back to it.

"Kevin was quite insistent that his two friends still went but he was just devastated on the road up. I was trying to keep him on the phone so he wasn’t too upset.

"He was just desperate to get out and go and have some fun and we managed to get him a ticket through the UEFA ballot. Rangers is Kevin’s first love – which he always says to me."

The beaming 'Gers fan headed off to reunite with pals in Seville, where Kevin's first love failed to claim a first European trophy for 50 years.