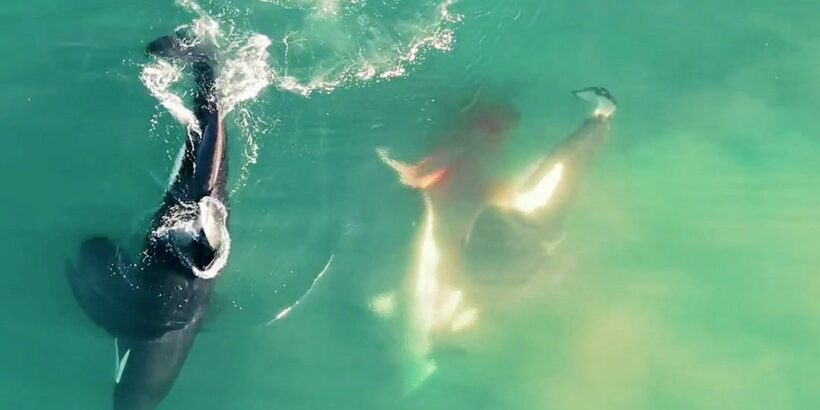 A drone camera has captured the gruesome moment a pack of killer whales were savaging a great white shark to death.

In the clip, which aired in Shark House on Thursday (July 28) as part of Discovery Channel's Shark Week, shows the three massive orcas surrounding the shark – repeatedly trying to rip into it.

One of the whales comes to the surface clenching the dead nine-foot shark in its jaws as the orca is biting it around its liver.

The water, off the coast of South Africa’s Mossel Bay, started to turn red from the blood as the orcas savagely wounded their prey.

Experts believe the video is evidence to support scientists’ theories that great whites are migrating away from their usual habitats because they are being hunted by orcas.

Scientist Alison Towner told the Daily Beast: "We’ve had all the evidence for killer whales being responsible for killing white sharks.

"But this is the world's first drone footage of killer whales predating on a white shark.

"It's the first time in South Africa it's ever been documented as direct evidence.”

The area around South Africa’s Mossel Bay is famously been an aggregation site for great whites – but in recent years the shark population has been depleting.

Discovery Channel and Discovery+ will be featuring all of their most grizzly shark content until Saturday (July 30) as part of their 34th shark.

Earlier this week, a diver has shared the hilarious moment a great white shark had a massive poo in his direction while he was filming the beast with his underwater camera.

In the three-second clip, which was broadcast in the Discovery Channel's “Mega Predators of Oz” documentary for Shark Week, the diver is left with a face full of faeces straight from a great white shark.

The shark is seen swimming near the divers, letting out a great big poo, which is just what Dr Charlie Huveneers and his team of biologists were hoping for as were there to try to get a sample of the giant shark’s faeces.