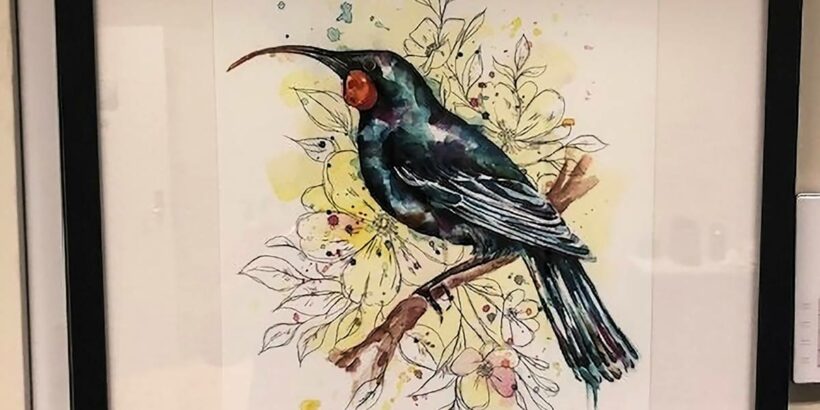 A framed, limited-edition print of an extinct bird given by Waikato Regional Council to dignitaries at the launch of the new Hamilton-to-Auckland commuter train cost Waikato ratepayers almost $5000.

But the gifts didn’t come out of the chairman’s six-figure salary. Instead each one cost council ratepayers $232.03, including GST.

News of the gifts come as the council is proposing a rates increase of 7.3 per cent in 2021/22, and has led to backlash from the New Zealand Taxpayers Union.

The gift was in addition to the $1200 cost of the launch event on March 25, where VIPs were invited to travel on the train from Hamilton to Huntly.Spending for the launch included $1835 on 175 badges with the Te Huia logo on them, also handed out at the event.

Rimmington said he wanted to give the framed print to acknowledge the people who had given five years of service to get the project off the ground.

“I feel probably a little bit ashamed that I didn’t give more than $4000 [excluding GST] to people who did five years’ work. It was probably a bit miserable and I’m probably a bit mean-spirited because these people have just done so much work.”

While the majority of the politicians and bureaucrats got paid for their work, Rimmington said he had carefully selected the 20 recipients who had gone “well beyond the call of duty” for what he described as a “small acknowledgement piece”.

The politicians and bureaucrats who received the prints – one of whom was Rimmington – were the “unsung heroes” of the project, he said.

“Most of them have been right through the whole project from whoa to go.”

He expected most of the “lovely prints” would be hung in people’s offices so they would be a great promotional piece because there was a plaque on each acknowledging it was the day the Te Huia service began.

“I think we were a bit mean-spirited to only do that for these people but anyway … it’s ratepayer money and we’ve got to be aware of ratepayer expense.”

Feedback from the recipients had been really positive. “They loved it.”

But Taxpayers Union spokesman Louis Houlbrooke doubted the gift would be tolerated by ratepayers.

Houlbrooke did not think ratepayers facing a substantial rate hike would be very forgiving of the spend.

“We don’t think the Māori King or the Prime Minister are in desperate need for more diplomatic gifts. The sad reality is individuals with such status are given so many tokens of appreciation that they tend to go unappreciated in a basement or an attic.”

Rimmington argued GST should not be excluded in the costings because the council could claim it back.