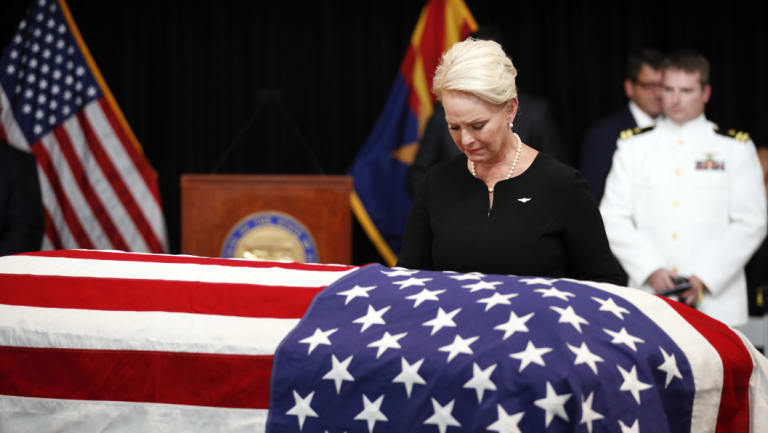 Cindy McCain, wife of, Senator John McCain, looks at the casket during a memorial service at the Arizona Capitol.

Phoenix: Thousands of people paid their respects to US Senator John McCain on Wednesday, standing for hours in the broiling Arizona sun before filing past the flag-draped casket that his tearful wife, Cindy, lovingly pressed her face against after a ceremony for the former North Vietnam prisoner of war who represented Arizona for decades.

Former military members in shorts and T-shirts stopped and saluted the closed casket flanked by National Guard members at the Arizona Capitol. Families with small children came by, and several people placed their hand over their heart or bowed, including Vietnamese-born residents who travelled from Southern California.

The private service held earlier marked the first appearance of McCain's family since the Republican senator died Saturday of brain cancer. It also began two days of official mourning in Arizona before his body is taken to Washington for a viewing at the US Capitol, followed by burial at the US Naval Academy in Annapolis, Maryland.

On Thursday morning in the US, a procession through Phoenix will bring the casket to a memorial service at a Baptist church, with the public invited to line the route along a highway. Former Vice President Joe Biden will speak.

McCain's body will then depart Arizona for another viewing Friday at the US Capitol, with a final memorial service at the Washington National Cathedral, followed by burial at the academy.

At the emotional private ceremony in Arizona, Governor Doug Ducey remembered McCain as an internationally known figure and "Arizona's favourite adopted son" on what would have been his 82nd birthday. He was born in the Panama Canal Zone while his father, who went on to become an admiral, served in the military. 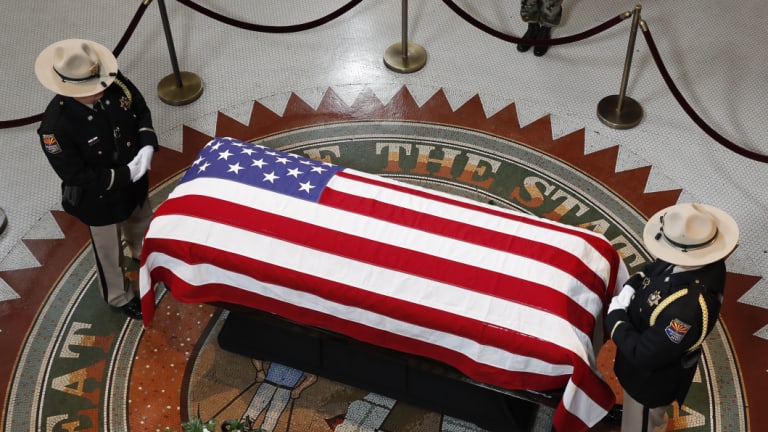 A man wearing a Vietnamese military uniform salutes near the casket of Senator. John McCain during a viewing at the Arizona Capitol.

Former Arizona Senator Jon Kyl said he had been with McCain across the world and he had better instincts on when to assert US power than anyone else he knew.

"I will miss him as a friend, and a strong force for America, and the world," Kyl said.

Senator Jeff Flake offered the benediction, expressing gratitude "for his life and for his sacrifice" and "that John made Arizona his home." 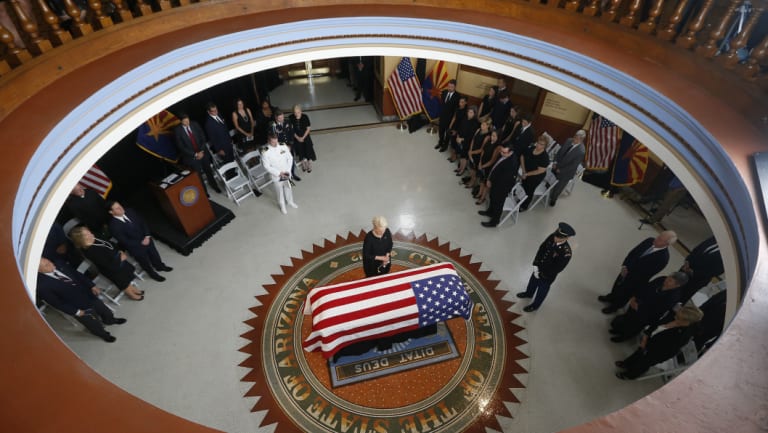 Cindy McCain, wife of John McCain, stands at the casket during a memorial service at the Arizona Capitol.

By the time the ceremony ended, crowds gathered for the public viewing of McCain's closed casket, seeking shelter from Phoenix's summer heat under tents stocked with coolers filled with ice and water.

Several heat injuries occurred late in the afternoon as the temperature reached a high of 40 degrees, and two people were taken to the hospital, the Arizona Department of Public Safety said.

The line snaked down streets even as a continuous flow of people flowed past the casket. The visitation was to continue as long as people waited in line, said Rick Davis, McCain's former presidential campaign manager.

By the time government offices closed for the day, as many as 6000 people had filed by, and that number was expected to grow, DPS spokesman Bart Graves said. 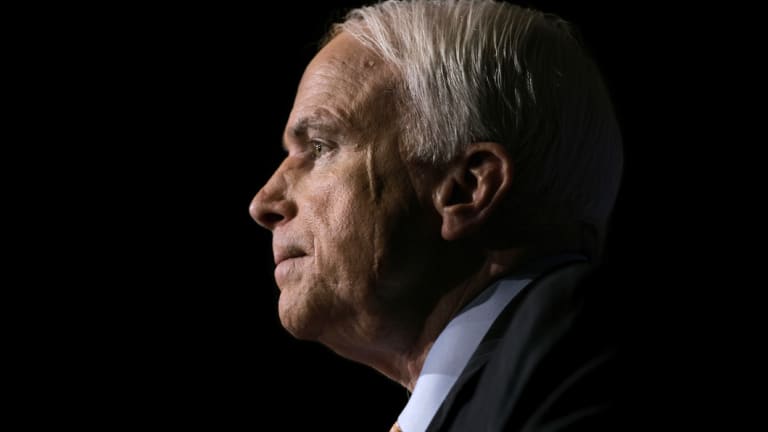 Some people travelled for hours, including a group of Vietnamese-born residents of Orange County, California, who arrived on two buses and wore yellow T-shirts reading, "We salute our hero Senator John McCain."

McCain was beloved among many Vietnamese-Americans for his history of fighting alongside the South Vietnamese and for supporting the families of political detainees, said Derrick Nguyen, who was with the group.

Nguyen said that in the 1990s, McCain pushed an amendment to a law that allowed for unmarried, adult children of political detainees to come to the US

"Many, many of the families that wouldn't have made it to America made it here," he said. "And they have become US citizens and good Americans."

Ray Riordan, an 87-year-old Navy veteran who fought in the Korean War, came from Payson, Arizona.

"I grew up where a handshake was a contract and your word was your bond," Riordan said. "He represented the last of that as far as I'm concerned."

Kassandra Morales, 44, stood in line with her sons, 8 and 2. The Democrat brought a bouquet of flowers and said she had always looked up to McCain and voted for him.

"Yesterday I asked my son who his hero was. He gave me a rapper's name," Morales said. "I brought my children here to show them what a real hero was."

For some Arizona residents, McCain has been a political fixture their entire lives. He took office in the state in the early 1980s, first as a congressman and then as a senator.

Phil Hubbard, a health care recruiter who lives in Scottsdale, held a cold water bottle in each hand as he waited for a chance to pay his respects.

"He believed in something," Hubbard said. "That's what he did, and that's what a lot of people need to do in this country. If you believe in something, stand up for it, whether it's popular or not."