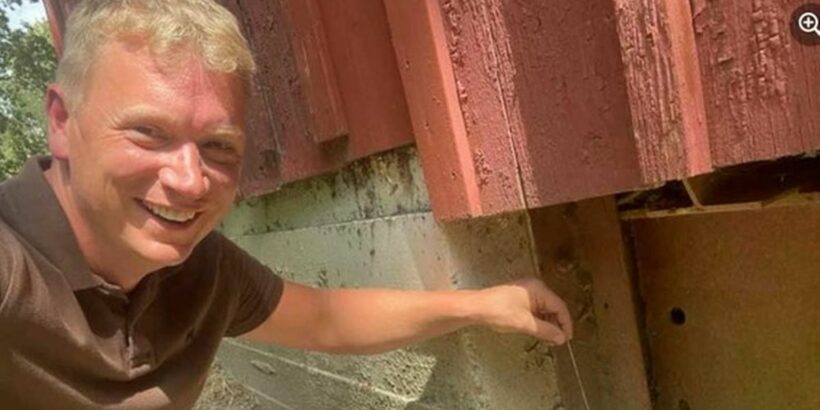 A dad returned the keys to his own chocolate factory after an epic quest to win a golden ticket.

Andrew Maas, 39, searched high and low across Colorado, Wyoming, Kansas and South Dakota in 2020 for one of the 50 Jelly Belly Candy Company's golden necklaces, containing $5,000.

When all those were found in locations across the US, he turned his attention to the big prize: a golden ticket with the keys to his own chocolate factory.

But a near-impossible riddle stood in the way of Mr Maas and the thousands of others intent to find the hidden clue, the the Washington Post reports.

It read: "Don’t have an instant idea, for a treasure diehard.

"Go Solve and Search, as low as our toe.

"Why find a nut and walks are no foe."

The puzzle was so difficult, Jelly Belly soon realised, they had to narrow the nationwide search down to just two states, Indiana and Illinois.

That's when Maas figured it, he explained on Facebook.

After a close look at a map of the state he noticed a small town named Kokomo.

He realised the Beach Boys song of the same name has a lyric "We'll get there fast and then we'll take it slow", a possible reference to the first part of the riddle.

Then, a Google Earth look at the map showed witches' hats in the park.

"We see witches nearby", he remembered.

The golden ticket was buried in the ground and Andrew pulled it out after a little digging.

He later got a call from company co-founder and jelly bean inventor David Klein.

Knowing it would mean moving his family down south, Andrew and Hannah decided against it.

Klein and Maas came to an agreement instead, with Jelly Belly "buying back" the factory from Andrew – whose family still cashed in.

"But the excitement and adventure was the real reward. The money is the gravy on top.”