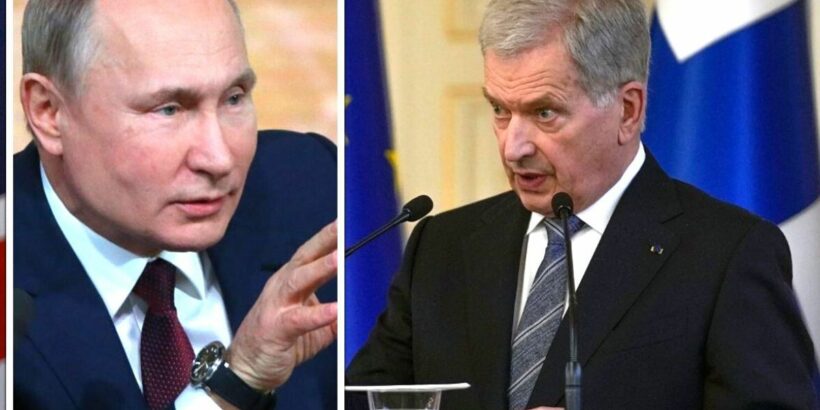 Louise Jones, Head of Intelligence at McKenzie Intelligence Services, told Sky News that Putin will use his “informational operations” to convince the Russian public that NATO forced Finland to join the Alliance to encroach upon them. Ms Jones added Putin will now be “quite worried” that other nations such as Georgia, which was attacked by Russia in the 2000s, could see this as an opportunity to join NATO themselves.

Ms Jones said: “So this is a really bad day for Putin. He did not want this to happen. He has essentially driven a neutral member to join NATO.

“There’s very little he will necessarily be able to do on the ground but what he’ll try and do is use this in his informational operations.

“Russia throughout all of this has tried to portray the conflict in Ukraine as a consequence of NATO expansionism as opposed to the counter narrative that these are democratic, sovereign states that have chosen to join a defensive alliance of their own free will.

“NATO has not coerced any member state to join at all.

“But what Russia will try and do in their messaging that is focused on non-Western states is to say: Oh, look, well here’s NATO continuing to expand. This is not conducive to solving the Ukraine crisis. NATO are carrying on with their bad habits’.

“Now, what this will also show is that those countries that have a close relationship with NATO, they’ll see countries like Finland and Sweden starting to make the leap.

“Countries like Georgia, which has not had an easy relationship with Russia – there was a conflict there in the late noughties.

“What Russia won’t want to see is Georgia taking any closer steps to becoming a NATO member.

“So this will be something that President Putin will be quite worried about.”

The Kremlin has issued renewed threats against NATO in response to Finland’s declaration of intent to join the Alliance.

“This cannot fail to arouse our regret, and is a reason for corresponding symmetrical responses on our side.”

Though Mr Peskov did not elaborate on the details of Russian reaction, officials have previously spoken about measures such as stationing nuclear-armed missiles on the Baltic Sea, which Finland shares with Russia.

Finnish President Saul Niniisto announced this morning that Finland would join the Alliance “without delay” after months of discussions.

In a joint statement with Prime Minister Sanna Marin, he said: “Finland must apply for NATO membership without delay.

“We hope that the national steps still needed to make this decision will be taken rapidly within the next few days.”

Reiterating previous messages, NATO Secretary-General Jens Stoltenberg said Finland would be “warmly welcomed” to the Alliance. He also promised an accession process that would be “smooth and swift”.