Behind the scenes hours before the royal wedding: Royal household members hug and kiss while protection officers share a joke

But I was among a small group of royal correspondents fortunate enough to be given a ‘walk through’ of St George’s Chapel early this morning to see the stunning flower arrangements that await her as she walks down the aisle.

As I walked to the castle around 7am, there was a carnival already in Windsor – excited picnic-carrying members of the public sporting fascinators joining those die-yards who had camped out all night. 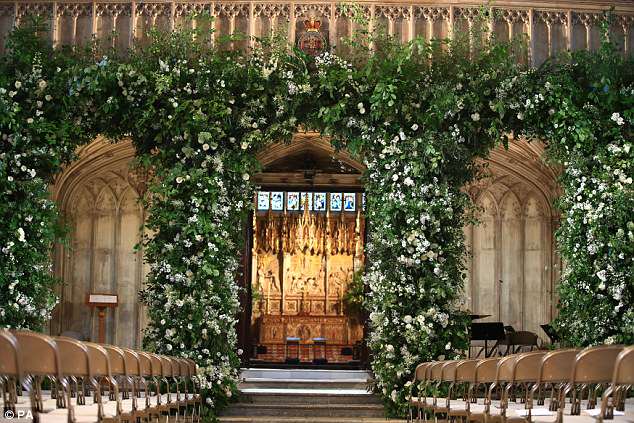 Brandishing two wrist bands, I was ushered inside the hallowed castle precincts. Above the golden stone of the 15th century chapel, the skies couldn’t have been bluer and the sun shone warmly even at that early hours on the gathering guests.

There was a real sense of this being a ‘family’ wedding – members of the royal household dressed to the nines and greeting each other warmly with hugs and kisses.

Even Charles and Camilla’s charming royal protection officers were laughing and joking, dressed to the nines in their morning suits.

While the south door of the chapel, which I entered through, had been covered by a beautiful arch of white and cream spring flowers, roses, forget-me-nots (in memory of Harry’s late mother, Princess Diana) and lily of the valley, it was nothing compared to the steps of the West Door, which will be used by Harry and his bride. 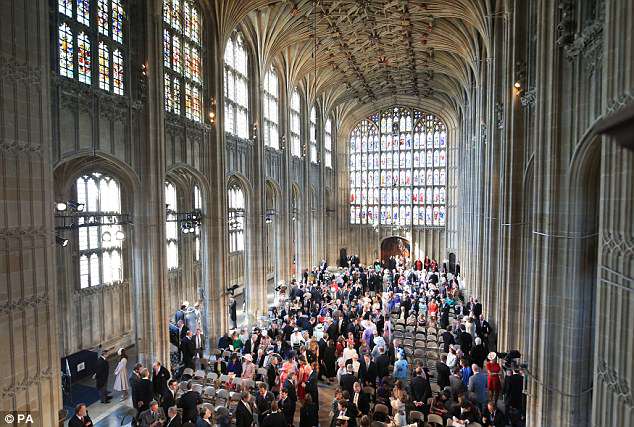 There was an audible gasp of breath as we viewed the floral arch that had been constructed above it and a beautifully chaotic tumbling arrangement running down either side of the steps, known as a ‘cascading hedge’.

Inside the historic chapel, where monarchs from Henry VIII to Charles I are buried, floral designer Philippa Craddock had done flower-loving Meghan proud.

As she walks down the nave in an hour, Meghan, who will arrive alone behind the Dean of Windsor and Virger Vaughn Wright, will be faced with a sea of verdant and exquisitely scented blooms cascading down over the organ screen, where Prince Charles will be waiting for.

The metal work went up on Wednesday, I was told, the foliage – beech, birch and other greenery – went up on Thursday, while the staff worked overnight yesterday to add the ‘patience’ and ‘purity’ garden roses, floxgloves, astilbe, spires, ammi, peonies (Meghan’s favourite flowers), delphiniums, stocks, spray roses, lily of the valley, nigella, Solomon seal, astrantia and larkspur. 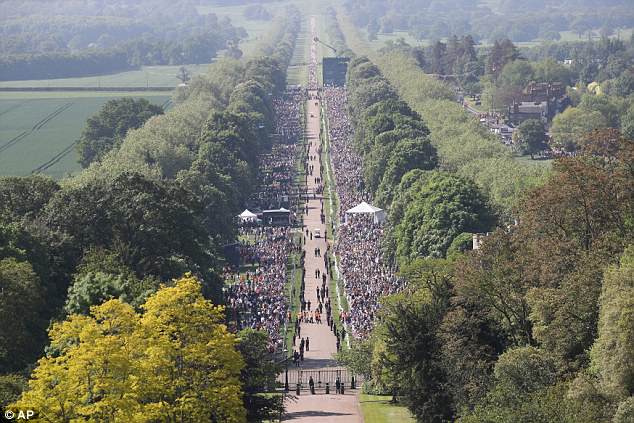 Philippa said she had hoped to reflect the ‘wild and natural’ landscapes from which many of the plants had been drawn, as well as the chapel’s architecture. She had clearly succeeded.

The chapel’s no-nonsense and encyclopaedic Chapter Clerk Charlotte Manley explained that the Prince of Wales would be waiting for his future daughter-in-law under the organ screen.

Placing her hand on his arm, Meghan will then make her way down the Quire – 37 steps, I counted – towards the High Altar where Harry will be waiting for her, as the orchestra, soprano Eliz Manahan Thomas and trumpeter David Blackadder perform Eternal Source of Life Divine by Handel.

Either side of the altar there are two huge stone urns carrying large sprays of flowers, and between them the golden 17th Century chapel plate.

Not that Meghan is likely to notice.

By that time, she will have eyes only for her future husband – and he, for her.