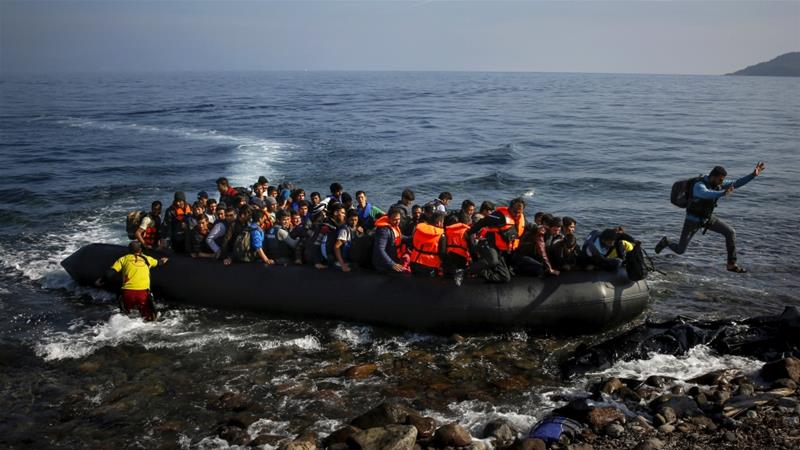 Athens, Greece – Elation has turned to anger for refugees on Greece’s eastern Aegean islands, following a court ruling that prolongs their confinement to those islands, but allows new arrivals to leave immediately.

Greek authorities were reportedly already allowing free movement for refugees arriving on Wednesday, a day after the ruling by the Council of State.

Dozens of refugees on Wednesday occupied Sappho Square in Mytilene harbour on Lesbos, in protest against what they see as discrimination against them.

“It was done to unburden the island. It was clear that this was not done for the benefit of the refugees … so they’re furious about it.”

There are also concerns that frustration at the double standard could lead to unrest.

More than 15,000 refugees are currently living on the islands of Rhodes, Kos, Leros, Samos, Chios and Lesbos, most of them in facilities built to house fewer than half that many.

The unreviewable ruling late on Tuesday overturned a decision of Greece’s Asylum Service, which confined applicants for international protection to the six islands if they arrived after March 20, 2016.

That’s when an agreement entered into force between the European Union (EU) and Turkey, obliging each party to quickly readmit people crossing their shared border without documents.

Since 2015, more than 1.5 million people have crossed from Turkey into EU member Greece, seeking protection from war or persecution in Africa and Asia.

Turkey needed some assurance that the people it was being asked to readmit had arrived in Greece after March 2016, and that it was not being asked to absorb refugees and economic migrants who had been in Greece for years.

“That could not be done if [asylum] applicants did not stay on the islands, until it was clear whether they were going to go in one or the other direction [deportation or asylum],” said Maria Stavropoulou, the outgoing head of Greece’s Asylum Service, who issued the original restriction.

The EU fully backed her. In December 2016, Greece’s Migration Minister Yannis Mouzalas asked the European Commission for permission to move asylum applicants to the mainland for processing, but his request was denied.

However, the Greek Council for Refugees, a legal aid NGO, successfully challenged Stavropoulou’s decision on the grounds that she was not legally competent to issue it in the first place.

Confinement to the islands after March 2016 was one of a series of deterrents that produced a dramatic drop in refugee arrivals in the Aegean – from an average of 2,700 a day in early 2016 to 300 a day by the end of March, and double digits after that.

Stavropoulou argued that the knowledge that refugees can immediately reach the European mainland will quickly encourage their numbers to rise again.

“I believe this butters the bread of smugglers, who will take full advantage of it,” Stavropoulou told Al Jazeera. “I am sure [this will encourage them to smuggle more people].”

The new freedom of movement is likely to be a false dawn for another reason. The Greek government has already submitted a bill to parliament that shores up the Asylum Service’s authority by transposing an EU directive into Greek law.

“[Asylum] applicants may move freely within the territory of the host Member State or within an area assigned to them by that Member State,” the directive says.

Stavropoulou believes that, armed with the new law, her successor will be able to re-issue the restriction.

Such a move would dismay organisations working with migrants.

“Trapping people indefinitely on islands in inhumane conditions should never be considered as a solution,” said Luca Fontana, field co-ordinator for Doctors Without Borders (MSF) on Lesbos.

“Unfortunately, this decision only applies to the new arrivals and not to the thousands of people who have been trapped for months, sometimes years, on the Greek islands … We call on the Greek authorities to lift these restrictions independently from the date of arrival, to avoid creating unnecessary suffering for people who have already been pushed to their limit.”

Islanders have long complained of theft and house burglaries for which they consider refugees responsible. They also fear the loss of livelihoods from tourism.

“The resolution of the Council of State is proof that the geographical restriction is unjust for everyone,” Lesbos Mayor Spyros Galinos wrote on Twitter.

“We hope that his is the beginning of the decongestion process for all the islands.”