Washington: US President Donald Trump has called for undocumented immigrants to be deprived of legal rights, arguing that people who cross the border into the United States illegally must immediately be deported without trial.

In a pair of tweets sent while being driven to his Virginia golf course, Trump described immigrants as "invaders" and said US immigration laws should be changed to take away trial rights from undocumented migrants.

The latest presidential exhortations came as Republicans were prepping for a vote on immigration legislation, after a more hard-line bill failed last week. But according to Michael McCaul, a Republican lawmakers from Texas and a co-sponsor of the hard-line bill, the White House was not giving up on it.

"I did talk to the White House yesterday. They say the President is still 100 per cent behind us," McCaul said on Fox News Sunday.

That would amount to a reversal from Friday, when the President tweeted that "Republicans should stop wasting their time on Immigration until after we elect more Senators and Congressmen/women in November." 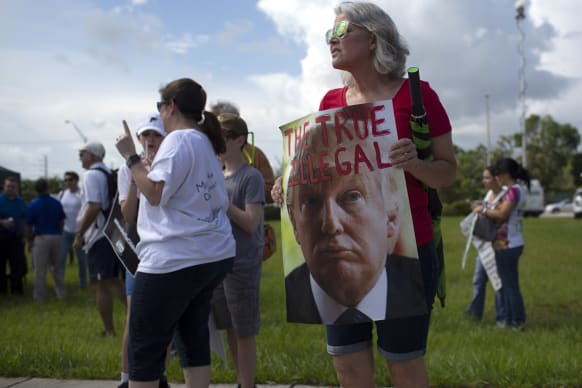 A demonstrator holds a sign during the ‘Keep Families Together’ rally outside of a temporary shelter for unaccompanied migrant children in Homestead, Florida on Saturday.

But that tweet, which demoralised Republicans as they headed home for the weekend, did not end talks about what the House might pass. There was more discussion on Sunday that Republicans could pass a narrow piece of legislation designed to extend the time that migrant family members could be detained by authorities.

"I think, at minimum, we have to deal with family separation," McCaul said.