Amid reports of “an impasse” between the Brooklyn Nets and Kyrie Irving, the seven-time NBA All-Star will exercise the $36.9 million option on his contract for the 2022-23 season, according to The Athletic’s Shams Charania.

Kyrie Irving: “Normal people keep the world going, but those who dare to be different lead us into tomorrow. I’ve made my decision to opt in. See you in the fall. A11even.” https://t.co/rpiS8YkSZI

Irving can now sign an extension with the Nets or if the two sides cannot agree on the long-term deal Irving was seeking, he can become an unrestricted free agent next summer. The Nets could still trade him this season.

Irving, an otherworldly talent and enigmatic personality, signed a four-year, $136.5 million contract with the Nets in 2019, seemingly linking the prime of his career to friend and fellow All-NBA performer Kevin Durant.

Following his return from a career-threatening Achilles’ tendon injury, Durant signed a four-year, $198 million extension last August, when Brooklyn general manager Sean Marks said the franchise was “very confident” extensions for Irving and James Harden would also be “signed, sealed, delivered” before this past season.

Neither Irving nor Harden committed last summer, and both of their relationships with the team fractured in the months that followed. Irving refused to meet New York City’s COVID-19 vaccine mandate and missed 53 games during the regular season as a result. Uncertain of the team’s direction, as Durant rested another leg injury and Irving was absent on principle, Harden forced a trade to the Philadelphia 76ers in February.

The Nets allowed Irving to begin playing road games in January, and the city gave him clearance to play in Brooklyn prior to the playoffs. He scored 39 points in a brilliant performance during a buzzer-beating loss to the Boston Celtics in Game 1 of their first-round series, and then combined to score just 46 points on 37% shooting over the remainder of a sweep. The Nets entered the season as title favorites and left in shambles.

Irving said afterward, “I don’t really plan on going anywhere,” reassurance that might have carried more weight had he not abruptly left contending teams in Cleveland and Boston over the previous five seasons. 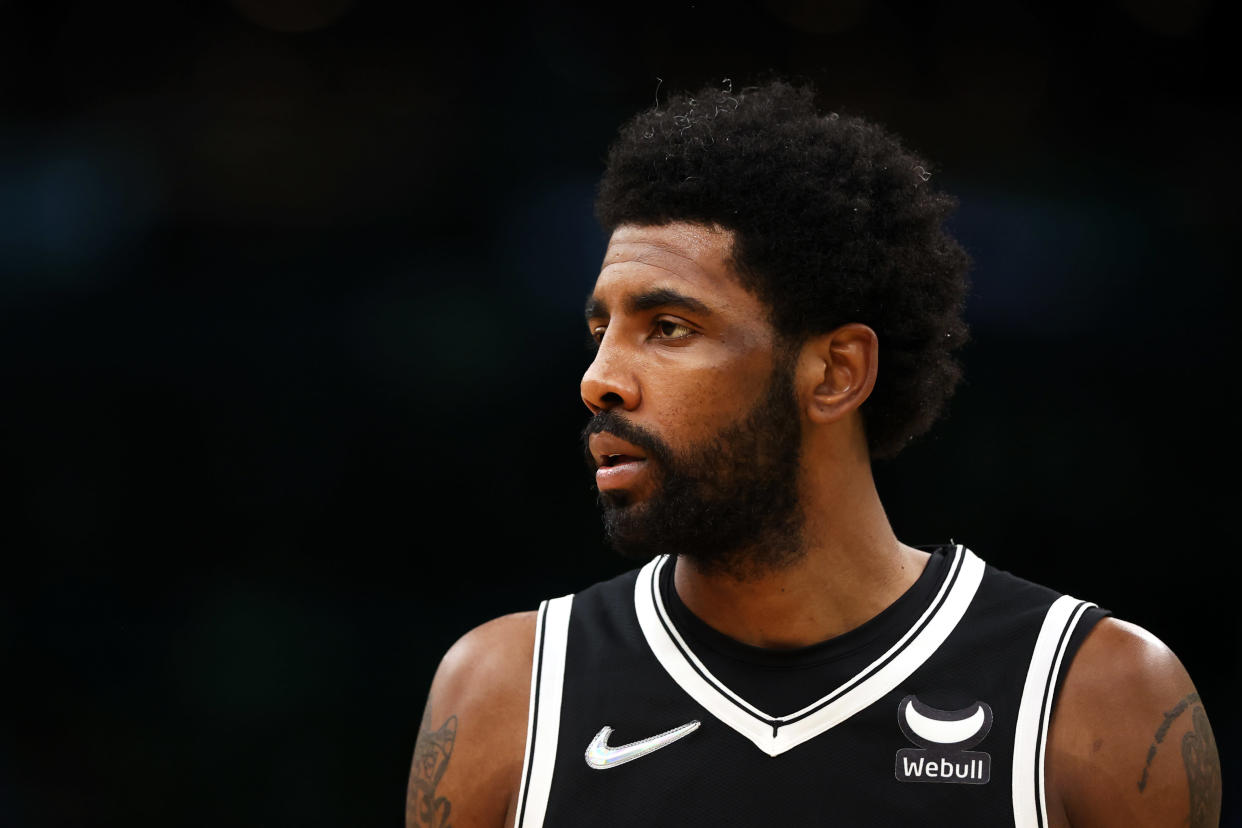 The vaccine mandate has been lifted, but injury and availability concerns still surround Irving, who has played in 116 of Brooklyn’s 246 regular season and playoff games over the last three seasons. Shoulder, hamstring, knee, finger, back, groin, ankle and facial injuries have cost him games since he signed in 2019. Shoulder surgery ended his 2019-20 season in February, and an ankle injury cost him the final three games of a seven-game 2020 Eastern Conference semifinals loss to the eventual champion Milwaukee Bucks.

Irving has also taken multiple personal leaves of absence from the Nets.

Irving said in March, “There’s no way I could leave my man [Durant] anywhere,” before clarifying in April, “I think that it really entails us managing this franchise together alongside” Marks and Nets owner Joe Tsai. That raised eyebrows around a team that has self-combusted and faces decisions this summer about Ben Simmons, Seth Curry, Joe Harris, Patty Mills, Nic Claxton, Bruce Brown and Blake Griffin, among others.

Marks appeared to counter Irving’s comments during his exit interview in May, when he told reporters, “We’re looking for guys that want to come in here and be part of something bigger than themselves, play selfless, play team basketball, and be available. That goes not only for Kyrie but for everybody here.”

In theory, a roster constructed around Durant, Irving and Simmons should contend, and oddsmakers agree. In practice, Irving and Durant have played 44 games together in three years, and Simmons has not played since struggling in the 2021 playoffs and subsequently sitting out last season for multiple reasons, including a trade request and holdout, a back injury that required surgery and self-described mental health struggles.

Irving’s unreliability has led to questions about what the 30-year-old’s next contract might look like. Since he was eligible for a variety of contract options that could net him well north of $200 million from the Nets through 2027 or close to that figure elsewhere over the next four years, the recent report from The Athletic’s Shams Charania that Irving and the Nets were not all that close to a long-term deal came as little surprise.

In fact, the New York Daily News’ Kristian Winfield reported in late May that Brooklyn is “outright unwilling to give him a long-term extension.” And since Irving tweeted this month, “I thought Mother Earth belonged to the people. Why am I paying to live here?” nobody should pretend to know what becomes of his deal.