London: Researchers claim to have confirmed the world's first case of a coronavirus reinfection, in a discovery with far-reaching consequences for the fight against the pandemic.

The 33-year-old IT worker was struck down by the disease in Hong Kong during the first wave but recovered and was discharged in mid-April. However, he tested positive again in mid-August — some 142 days later — after travelling through Spain and the United Kingdom. 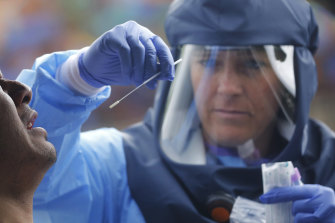 The pandemic has killed more than 806,400 people worldwide since late 2019.Credit:AP

Dr Maria Van Kerkhove, the technical lead for COVID-19 at the World Health Organisation, said there was still a lot to learn about how strong an immune response is and how long it lasts.

She praised the Hong Kong researchers for using genome sequencing to identify that the 33-year-old had been affected by two different strains, but also noted about 24 million cases had been reported to date and this would be the first scientifically proven reinfection.

"I don’t want people to be afraid. We need people to understand that if they are infected, even if it is only a mild case, they do develop an immune response," she said from Geneva on Monday.

The Hong Kong study will be published in the respected Clinical Infectious Diseases journal.

The pandemic has killed more than 806,400 people worldwide since it emerged in China in late 2019.

Spain, where the 33-year-old Hong Kong IT worker travelled before he was reinfected, is grappling with a resurgence of cases. New cases on Sunday and Monday tipped the total number of people infected in the country this year to more than 400,000.

Most European nations appear unwilling to return to nationwide lockdowns and are implementing local measures to make sure any second wave does not overwhelm hospitals.

In an interview with broadcaster TV4, Swedish epidemiologist Anders Tegnell — the architect of that country's controversial strategy — said he was not expecting the nation to be hit by a "classic second wave".

"This disease appears to work in a different way," he said.

"The spread is more patchy, so the likelihood is greater that we will see — as one is currently seeing around Europe — outbreaks in certain places, at workplaces and similar environments, during the autumn."