Frustrated residents who have been left upset by commuters parking on their streets for 14 hours a day have decided to fight back by lining the roads with their bins.

Seven streets in Hulme, a suburb of Manchester, were filled with rubbish and recycling bins in a desperate attempt to drive workers away on Wednesday morning.

Dozens of residents put their bins in the road at 6am and left their cars with large spaces in between, leaving commuters with nowhere to park.

Panicked drivers trying to find a space to leave their cars ended up parking on street corners in a bid to avoid being late for work. 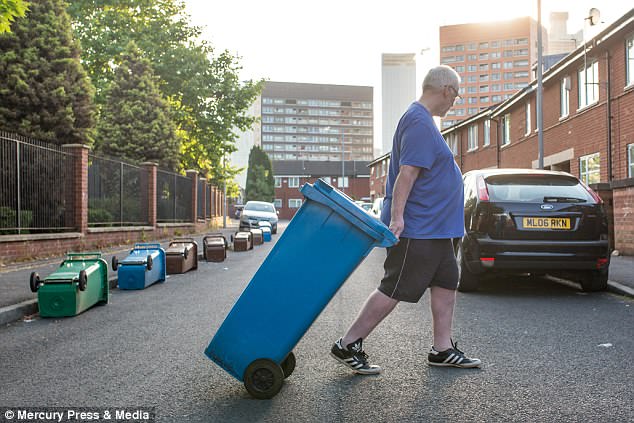 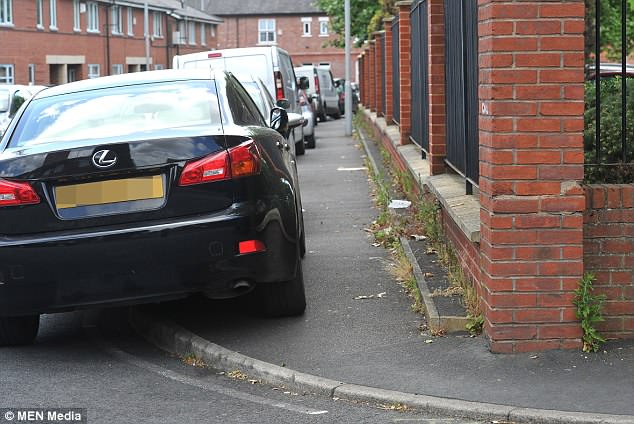 Residents of the St George’s area of Hulme have become fed up of the large number of Manchester commuters parking in front of their homes each day. Pictured: Commuter cars parked on streets last Thursday 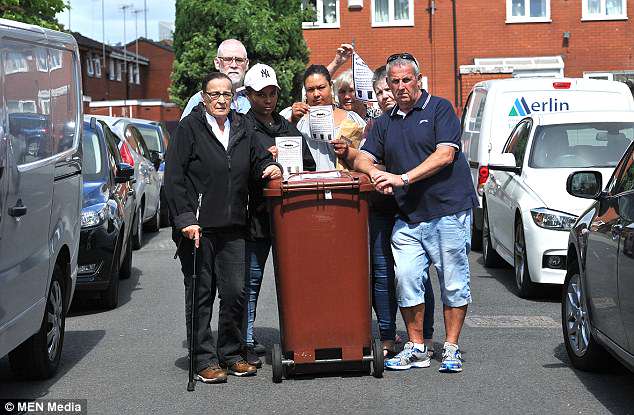 Dozens of residents put their bins in the road at 6am and left their cars with large spaces in between, leaving commuters with nowhere to park on Wednesday morning

Residents of the St George’s area of Hulme have become fed up of the large number of commuters parking in front of their homes each day.

They claim each morning drivers ditch their cars and ring taxis to work to avoid expensive parking fees in Manchester.

The drivers allegedly leave their cars for up to 14 hours per day, forcing locals to push prams along the road and even leaving some disabled residents housebound.

Guy Neild, of Anne Nuttall Road, said: ‘One woman had been parking her car outside my house for weeks and calling a taxi to my address.

‘She was calling it to my house then standing at the end of my path until it arrived, as if she lived here.

‘The parking is so bad that this Wednesday we are putting our bins in front of the pavements to stop people parking.

‘I don’t think it will make the slight bit of difference – commuters will just get out of their cars and move the bins.

‘But we hope it’ll send a message to the council that something needs to be done.’ 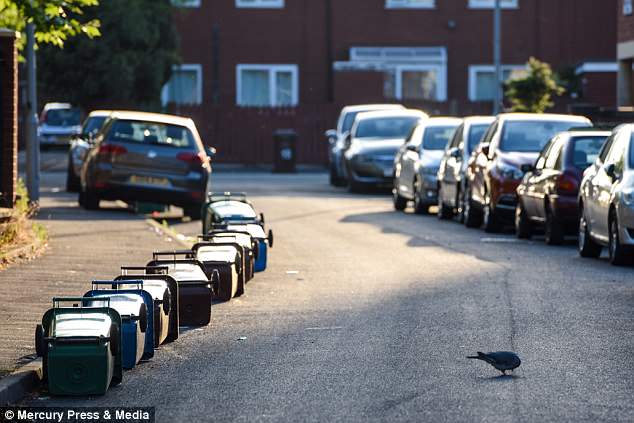 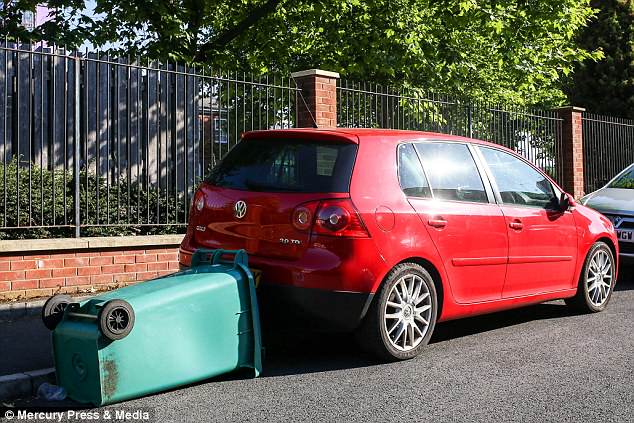 Guy Neild, of Anne Nuttall Road, said: ‘One woman had been parking her car outside my house for weeks and calling a taxi to my address’ 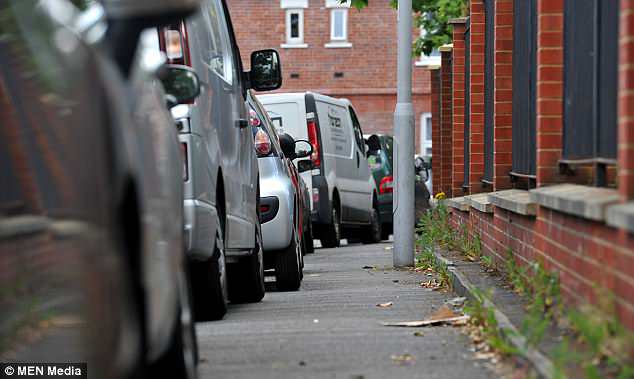 The drivers allegedly leave their cars for up to 14 hours per day, forcing locals to push prams along the road and even leaving some disabled residents housebound. Pictured: Workers’ cars lining the streets in Hulme last Thursday

Guy claims his wheelchair-bound mother hasn’t visited his property for three years because cars block the pavement and she is scared to go in the road.

The 55-year-old also believes children are at risk as people park on the corners, causing dangerous blind spots.

He claims the main culprits are commuters who walk the short distance into the city centre and builders from a nearby site.

Guy said: ‘In this street on a week day, the cars are parked bumper to bumper, yet only three that I can see belong to people who live on this street. The rest belong to builders or commuters.

‘Those who work in the city centre, which is only around a mile away to walk, arrive at 6.30 or 7am, park their cars and either walk or cycle into the centre.

‘They’ll leave their cars here all day until they pick them up again at about 6 or 7pm. It’s selfish. I wouldn’t mind if it was for a few hours but it’s all day.

‘There is one woman who comes every day and walks into the city centre.

‘The person whose house she parks in front of can’t park her car on the street as a result.

‘There are young children in this area and cars park on the bends. If a child was to run out, there is no way they would be seen.

‘My mum lives around the corner. She’s 75 and in a wheelchair.

‘She hasn’t been here for three years because the cars block the pavement and she’s terrified of having to go in the road in her chair.’ 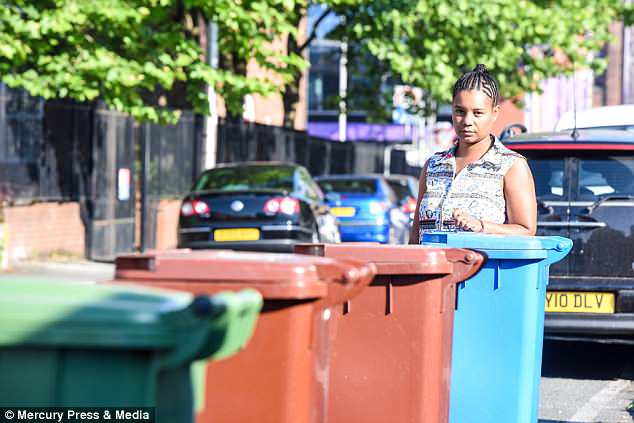 Pictured: Resident, Lavinia, 41, with some of the bins she helped put out overnight on the St George’s estate in Hulme, Manchester 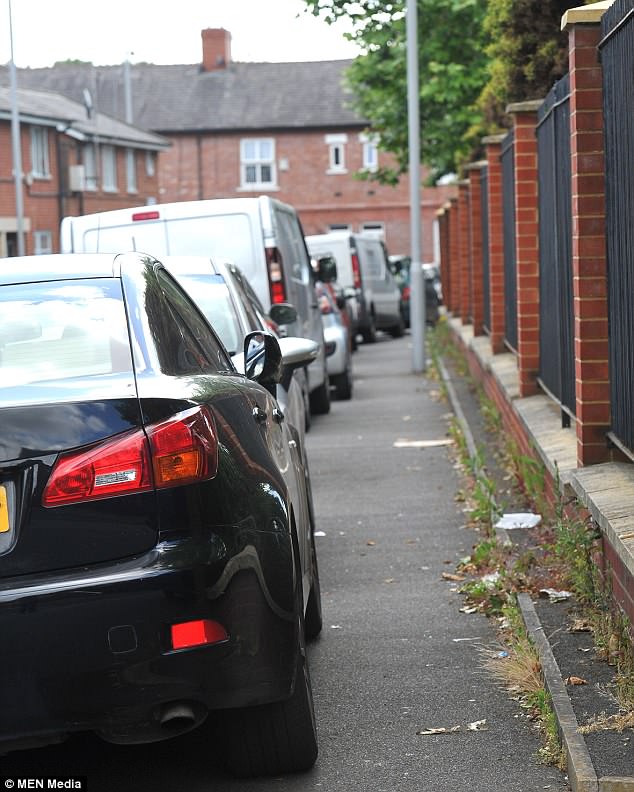 He has called for parking permits in the St George’s area as he claims the four other areas of Hulme have them.

Following Grenfell, he also claims two blocks of flats nearby had their cladding removed and he believes if there had been a similar incident at those flats, fire engines wouldn’t have fit down the road due to double parking.

Guy said: ‘The problem with Hulme is that it’s split into five sections.

‘Every other section has parking permits but there isn’t apparently the budget to police permits here. It doesn’t make sense to me.

‘We don’t ask for anything special – we just want equality with the rest of Hulme.

Other residents from two nearby streets – Lower Moss Lane and Bramfield Walk – have also been adversely affected by the lack of parking regulation.

Mother-of-two Katie Wandrum, 33, claims her son’s babysitter is unable to use her pram on the pavement and is forced to go into the road as cars block her way. 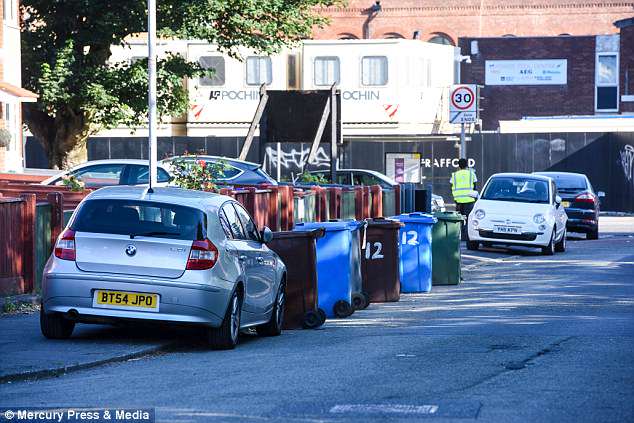 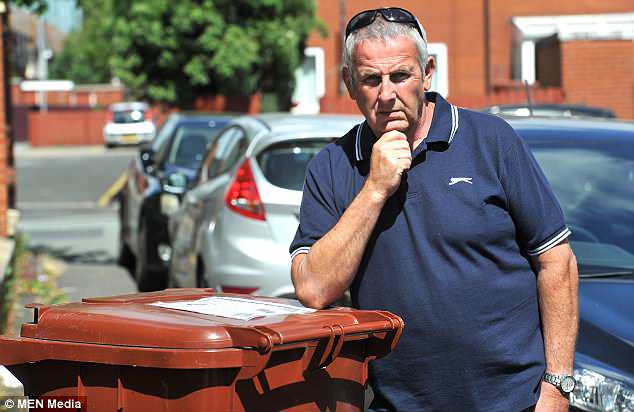 Pictured: Concerned resident Kevin Gallagher, who has organised a protest about cars parked on the pavements outside homes in Hulme, central Manchester

She continued: ‘People can’t walk or use prams on the pavements because of others leaving their cars for hours on end.

‘They have actually had to put a ”road closed” sign at the end of the street on bin days to stop cars blocking the binmen.

‘Some people actually get out, move the sign and drive past. It’s unbelievable.’

Newton Samuels, 77, had a double knee operation two weeks ago and is unable to get out of his driveway for doctor’s appointments.

Manchester City Council have sprayed a yellow box at the entrance of Newton’s driveway with ‘no parking’ written in it, but he claims it has made little difference and he is regularly blocked in.

Newton said: ‘I’m having a lot of problems as a disabled person.

‘Some people in the area have two cars and nowhere to park them both, so they’ll park them right in front of my gates, despite the ”no parking” sign painted on the road.

‘I have to squeeze myself into my car and I’ve only just come out of hospital after two knee operations.

‘If they park over my disabled parking space, my driveway gate won’t open and I’m blocked in for the day.

‘It’s making me ill, but nothing is being done about it.’ 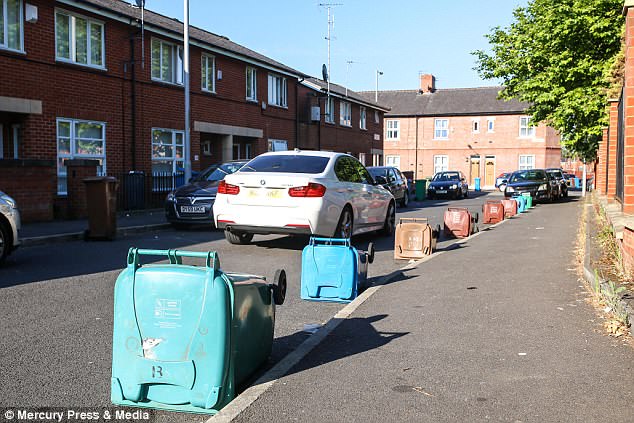 Manchester City Council said it was aware of the parking problems in the area and was looking into ways to help the residents.

Executive Member for the Environment, Planning and Transport, Councillor Angeliki Stogia, said: ‘We are aware of the problems caused in the St George’s area by commuter parking.

‘Officers and local councillors have been meeting with residents to examine ways in which this issue can be addressed and will meet with them again in the near future, to update them on our progress.

‘We will continue to work to find ways to bring a scheme forward. At the same time, we are developing a comprehensive set of parking policies to discourage commuter and non-resident parking in residential areas across the whole city.

‘This is a priority for us and we’re working hard to develop solutions which will alleviate the inconvenience this issue is causing to residents.’