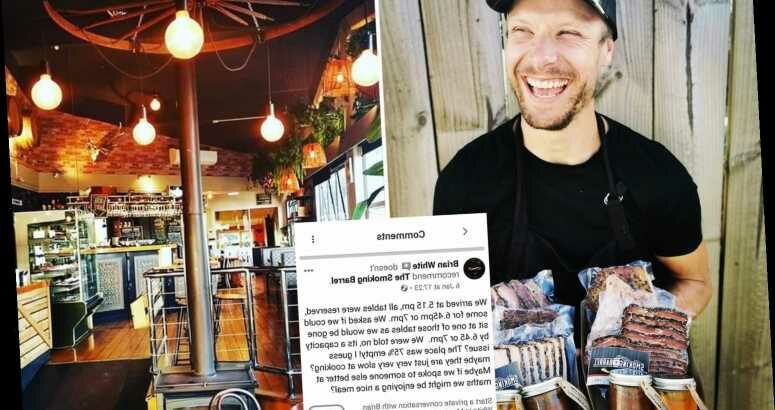 A RESTAURANT owner has hit back at a complaining customer who left a bad review after being turned away for not having a reservation, telling him to “wake up”.

The fuming restaurateur left a scathing response to would-be customer Brian, who had posted a negative jibe about the New Zealand barbecue diner when he couldn’t get a table for dinner. 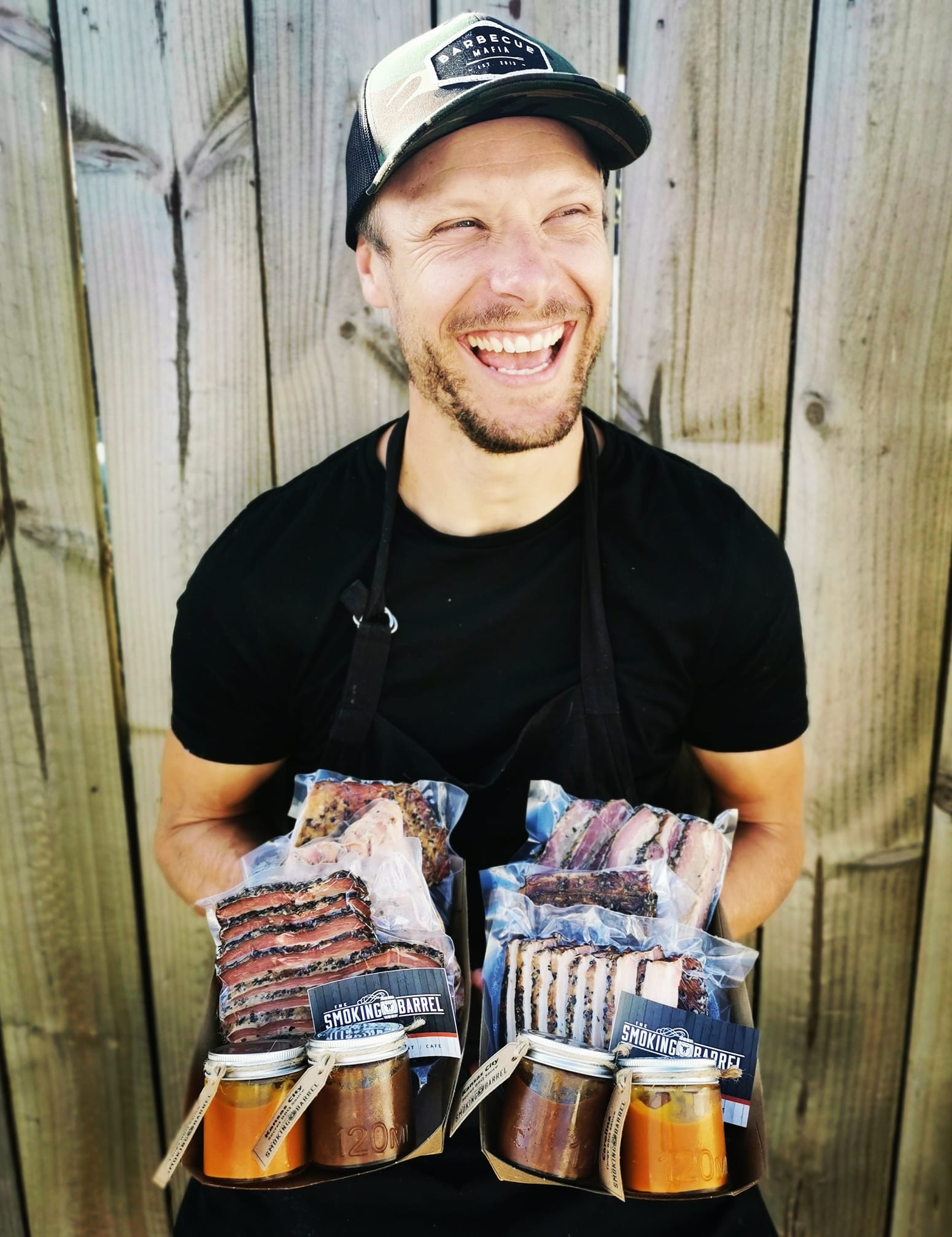 The Smoking Barrel in Motueka was given the bad Facebook review when Brian claimed he was turned away despite the barbecue restaurant being “75 per cent empty”.

But the owner Josiah Smith was quick to respond to the moaning review, accusing Brian of “thinking the world revolves around him” and telling him to “wake up”.

Brian, you need to wake up

“People like Brian get their heckles up because we are fully booked for a dinner service. He didn't book a table because he thinks the whole world revolves around him,” said owner Josiah Smith.

“Actually, he just wasn't very well organised. Well Brian, you need to wake up. You have no idea my friend.”

The withering response has since gone viral, with many praising the restaurant and labelling the complaint "crappy" and "horrid", reported the NZ Herald.

Brian's issue came when he claimed he arrived at the restaurant on the South Island of New Zealand at 5.15pm on January 6 and tried to get a table.

He said all tables were reserved, some for 6.45pm and 7pm, but he asked if he could be seated if he was able to eat and leave before the next booking arrived.

“We were told no, it's a capacity issue? The place was 75 per cent empty!” he wrote online.

“I guess maybe they are just very very slow at cooking? Maybe if we spoke to someone else better at maths we might be enjoying a nice meal?” 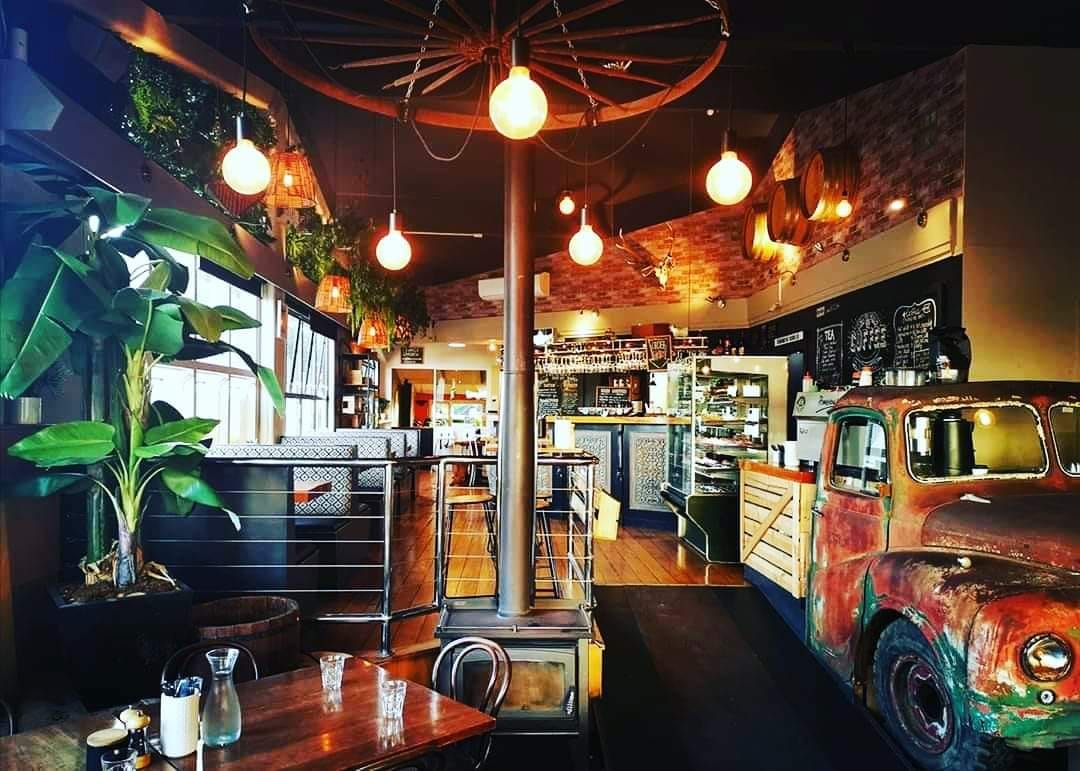 Mr Smith later shared the review alongside his response, telling Brian he has "no idea".

"Every time we open our doors, we also open ourselves up to criticism, personal preferences and reviews," Smith wrote.

"These days, everyone likes to think that they are a food blogger or a MasterChef judge."

He added the team at the restaurant – which is ranked in the top eatery spot on the town’s TripAdvisor reviews – had worked “unimaginably” hard over the past year.

“They have done the extraordinary. They've sacrificed sleep, their families and relationships and personal enjoyment whilst everyone else at this time of the year is kicking back and enjoying the experience that we work so hard to create,” he said.

Mr Smith also pointed out the restaurant churns out up to 700 fresh doughnuts every day as well as smoking around 500kg of brisket, pulled pork, and ribs and another 200kg of chicken.

The restaurant has since received an outpouring of support, with one fan labelling the post "spot on, timely and brave".

“Customers are so important but they are not always right,” another supporter said.

“Some people can only think of themselves,” another agreed.

Others called Brian's review – which has since been deleted – “horrid”, “crappy” and “unfounded”, telling him “you messed with the wrong town”.

Mr Smith added he backed his team “100% any day”, concluding by posting: “Brian, you can keep walking.” 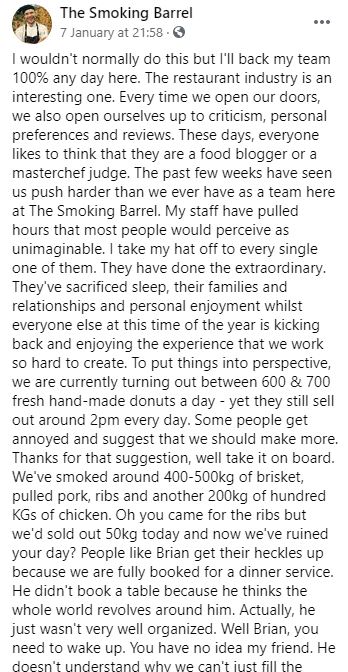 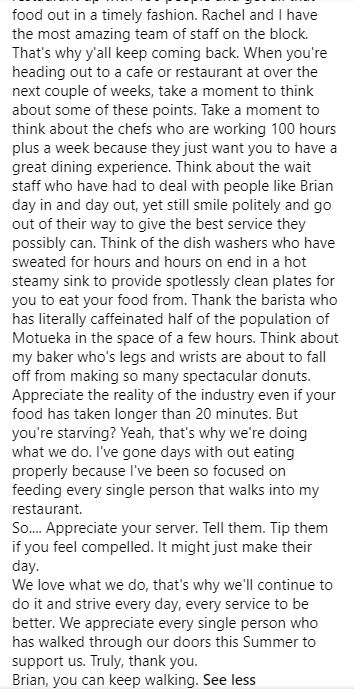