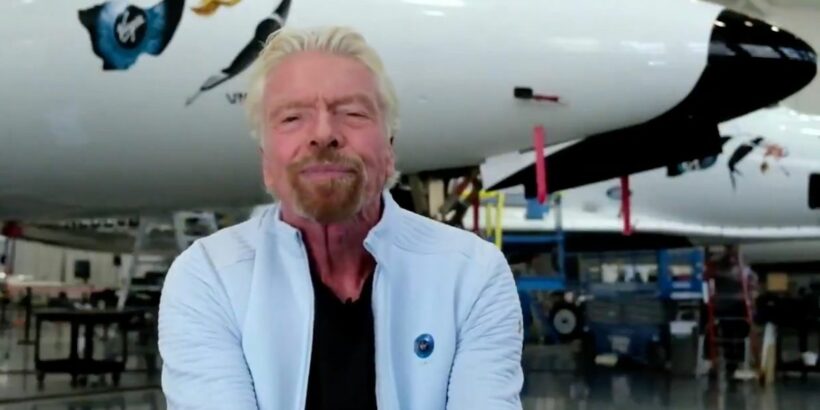 Richard Branson has admitted he is "a little bit nervous" as he prepares to win the billionaire space race on Sunday.

The Virgin mogul says he has spoken to Jeff Bezos ahead of Virgin Galactic's launch but explained they share different visions for aerospace travel.

Appearing on BBC's The One Show, on Wednesday evening, 70-year-old Branson said he and Amazon CEO Bezos have been on a "difficult" journey to get this far with Blue Origin launching later this month.

Earlier on NBC's "TODAY" show Branson insisted is no rivalry with Bezos.

"I know nobody will believe me when I say it but honestly there’s isn’t a competition," he said.

After 17 years "trying to avoid getting excited" since establishing Virgin Galactic in 2004, Branson will join five others in a test spaceflight on July 11, as announced last Thursday.

"I've had 17 years of trying to avoid getting excited and it was only three days ago when our chief engineer said we've ticked every box, we're ready for you to go to space on Sunday and I'm now getting ridiculously excited."

Virgin Galactic pilots Dave Mackay and Michael Masucci will be at the controls of the company’s VSS Unity spacecraft, NBCNews reports.

Speaking on The One Show, Branson continued: "We've got two other Brits on board, Colin we've got our chief astronaut, who will be flying us, Dave McKay who used to work for Virgin Atlantic so there's three Brits going up and a couple of wonderful people and we're all ridiculously excited.

"Obviously a little bit nervous but you know who wouldn't be just before heading off to space? But I'm by and large excited."

Virgin plans to make space travel a money-spinning tourism business with more than 700 people already on a list of reservations, set to fork out $250,000 or £180,000 on a ride, according to NBCNews.

But the billionaire did not rule out a 'Willy Wonka' style lucky dip to allow a member of the public on board for free after presenter Ronan Keating read out a viewer's question.