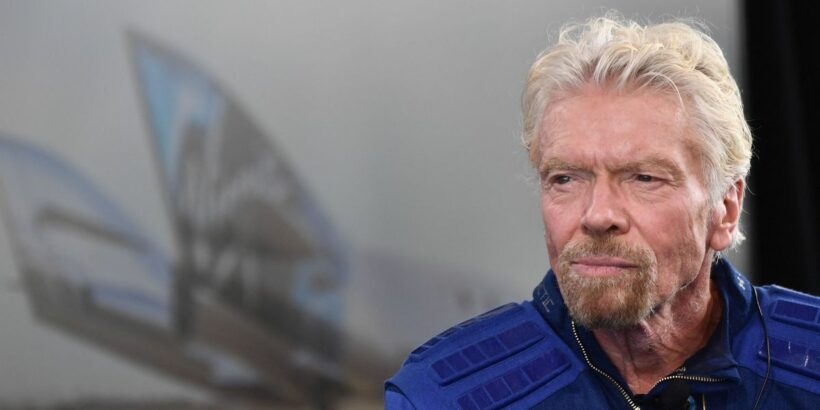 It was revealed this week that the Virgin Galactic flight on July 11 strayed from its "entry glide cone" – meaning it didn't rise steeply enough to make its way down safely on the British billionaire's historic trip to the edge of space.

After the yellow warning light flashed, the pilots knew they were seconds away from seeing the dreaded red alert.

The two pilots flying the Virgin Galactic ship actually told a meeting the warning light should "scare the s***" out of any flyer and force an immediate turn-around, The New Yorker reported.

And retired Air Force pilot Mike Masucci added: “Red should scare the c*** out of you.”

This is because "cone" errors – signalling that the flight path is not being followed – mean the vessel is not meeting its necessary altitude and must abort mission.

Then, it went red.

But Sir Richard's highly anticipated space flight kept going despite warnings to the pilots that they should end the mission immediately.

Aborting the mission would have meant huge embarrassment for Branson and Virgin Galactic as he sought to get ahead of his billionaire rivals Elon Musk with SpaceX and Jeff Bezos with Blue Origin.

The billionaires' space race may have motivated that decision to continue the potentially dangerous journey. Virgin Galactic said that it put the safety of its crews first in a statement to The New Yorker.

A US Federal Aviation Authority (FAA) spokesperson told The New Yorker the flight "deviated from its Air Traffic Control clearance” and that an “investigation is ongoing.” Virgin Galactic flights have since been grounded.

But Virgin Galactic didn't tell the FAA they flew outside the designated airspace for more than 100 seconds.

That further worried space experts and the authorities, who Virgin Galactic now said they will work closely with to update alert procedures.

Virgin Galactic wrote in a statement that the July 11 flight was a "safe and successful test flight that adhered to our flight procedures and training protocols.

The statement added: "When the vehicle encountered high altitude winds which changed the trajectory, the pilots and systems monitored the trajectory to ensure it remained within mission parameters.

"Our pilots responded appropriately to these changing flight conditions exactly as they have been trained and in strict accordance with our established procedures."

Virgin said it is "cooperating fully" with the FAA investigation.