RICHARD KAY: Bouquet of her favourite forget-me-nots, flash of her dazzling aquamarine ring but most tantalising of all… was empty seat at the royal wedding REALLY for Diana?

From the sparkling aquamarine ring on Meghan’s finger to the childhood nanny honoured with a close-up seat alongside the Royal Family for the ceremony, Diana’s presence was everywhere.

Her name was on many lips, too, including those of her sons.

As they waited at the High Altar for the arrival of Meghan, William and Harry shared a private memory of ‘Mummy’.

William asked his younger brother if he remembered something Diana had told them. A smiling Harry said: ‘Yeah, I know.’

Indeed, their mother’s influence was threaded through much of the day, either deliberately or subconsciously.

For example, it may have been Diana’s influence that deflated the seriousness of the moment when Harry, in deadpan mode, began his groom’s speech by welcoming guests to what he had promised would be a ‘low-key’ wedding.

No area escaped her memory, not even the music. The hymn chosen, Guide Me O Thou Great Redeemer, was one of her dearest. It closed her funeral at Westminster Abbey in 1997 and was played at the Guards’ Chapel memorial service in 2007 to mark the tenth anniversary of her death. 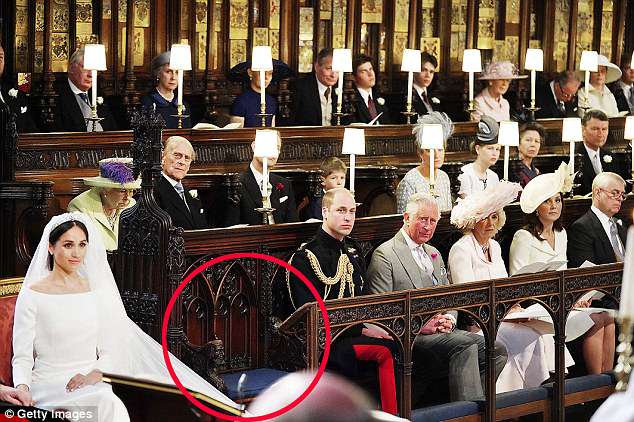 Prince Harry and Prince William’s mother’s influence was threaded through much of the day, either deliberately or subconsciously. Some even believed the space in front of the Queen was left empty for Princess Diana

Then there was the bridal bouquet of forget-me-nots — the Princess’s favourite — that Harry hand-picked from the walled garden at Nottingham Cottage, his home at Kensington Palace.

The ring Meghan wore to the evening reception had been a gift to Diana in 1996. After her divorce, when she no longer wanted to wear her sapphire engagement ring — now worn by Kate — it sometimes appeared on the third finger of her left hand.

Both rings were part of Diana’s small personal jewel collection — there were also aquamarine drop earrings and a charm bracelet bought by Prince Charles. Not much really, for the mother of a future King, and nowhere near the amount of jewellery the Prince has since lavished on the Duchess of Cornwall.

All the other major pieces Diana had were returned to the Royal Collection after she died, but Harry and William inherited her privately owned trinkets.

Each has used these treasured pieces for the truly significant moments in their lives.

But perhaps the most indelible element of Diana’s legacy was not in any physical object but in the choice of speaker for the ceremony’s only reading — her sister, Lady Jane Fellowes.

Some might think she would not ordinarily have been the most obvious choice. Diana was closer to her eldest sister, Lady Sarah McCorquodale, who often accompanied her on official engagements as a lady-in-waiting.

And Jane’s marriage to the Queen’s then private secretary, Sir Robert — now Lord — Fellowes, with whom Diana quarrelled, had created tension between the two women.

Harry, however, wanted it to be Aunt Jane. He is close to the Fellowes’s children, Laura, Alexander and Eleanor. As youngsters they lived and played together at Kensington Palace and there were memorable holidays to Necker Island, Sir Richard Branson’s Caribbean hideaway.

Visits to Aunt Sarah and her children at their home in Lincolnshire were less frequent. 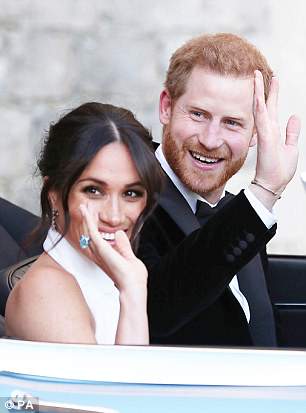 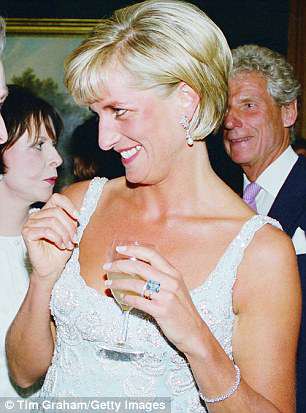 The ring Meghan wore to the evening reception had been a gift to Diana in 1996. After her divorce, when she no longer wanted to wear her sapphire engagement ring — now worn by Kate — it sometimes appeared on the third finger of her left hand.

Indeed, these deep links ensure that for both Harry and William, their mother continues to play a huge part in their lives.

Only four years separated Diana from Jane, and many listening to her read from the Song of Solomon in St George’s Chapel were mentally transported back to Jane’s powerful contribution at Diana’s funeral.

Then, her voice, cracking with emotion, had sounded so like Diana’s.

In the intervening years, she has remained the most low-profile of the Spencer family. So low, indeed, that many were surprised she agreed to carry out such a prominent role.

She spoke the lines with feeling but you could sense that, unlike the bride, she is a woman used to living a totally private life and who, for the best of reasons, had taken her courage in both hands to do something this public.

For her part, it was perhaps a healing act — and with Harry’s overture to her, a similar gesture on his side. We all recall the harsh, long-scarring words of the Spencer sisters’ little brother Charles, Earl Spencer, at Diana’s funeral, when he spoke of Diana’s ‘blood family’ — a phrase interpreted as deeply wounding to the Windsors.

In all circumstances, how appropriate it was for Jane and her husband to be sitting in the sovereign stall where the Queen normally sits. And, significantly, the couple were on the steps near Harry and Meghan when they had their first kiss as man and wife.

This was proof, surely, that Meghan and the Spencers are going to get to know one another very well in the coming months.

Meanwhile, sprinkled among the congregation in some of the most prized seats, were friends of Diana who played key roles in her life.

There was Carolyn Bartholomew, with her husband William, in the front of the choir, facing the best man and the Prince of Wales. She is Harry’s godmother and was one of three young women who shared Diana’s Earl’s Court flat and was privy to the secret when she first met Charles.

Willie Van Straubenzee, Diana’s tennis partner and confidant, was across the aisle from her friend Julia Samuel and her husband Michael — she is the founder of Child Bereavement UK, a charity with which Meghan and Harry have formed strong links.

Diana’s childhood friend, the former Lady Carolyn Herbert — who is married to John Warren, who oversees the Queen’s equine interests — was sitting alongside George Clooney.

No royal ceremony, it seems, is complete without Sir Elton John, who has been entertaining the Queen’s guests since Prince Andrew’s 21st birthday party in 1981. It was there that Diana, not yet married, first met Elton — the pair danced the Charleston for 20 minutes. 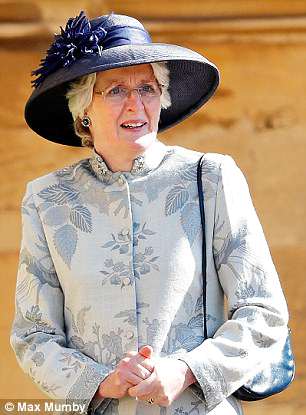 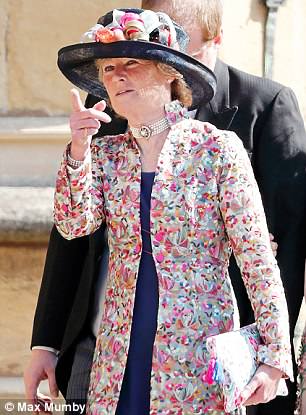 Perhaps the most indelible element of Diana’s legacy was not in any physical object but in the choice of speaker for the ceremony’s only reading — her sister, Lady Jane Fellowes (left). Diana was closer to her eldest sister, Lady Sarah McCorquodale, but Harry chose Jane who they visited regularly as kids

It was a friendship at first sight, but their relationship was complicated at times.

In 1997 they fell out after the pop star used pictures of Diana and the boys, among others of semi-nude models, for a charity fundraising book. They were reconciled at the funeral of the murdered fashion designer Gianni Versace.

Elton performed at Diana’s funeral and because Harry knew how much his mother had loved Elton’s music, he invited him to attend the wedding — and to perform at the reception.

One intriguing element of the day that was noted by many television viewers was the empty seat in front of the Queen and next to Prince William.

Could it have been a deliberate and profoundly emotional gesture by Harry, leaving a space for his absent mother?

As touching as this sounds, the real reason is more mundane.

Remember that St George’s is the Queen’s private chapel and this particular seat is one she doesn’t find comfortable. Nor, under protocol, can anyone sit in front of her.

So no one did.

For many, however, it served as an emotional symbol of Harry’s deep sadness that his mother could not be there.