Hell, didn’t it feel good when Germany crashed out of the World Cup in Russia yesterday? It may not be a noble sentiment, nor very Christian, nor even especially grown-up.

But there are worse ways to spend a sweltering Wednesday afternoon than revelling in the four-times champions being humbled by the might of South Korea.

Even as the game entered injury time, we feared there was an inevitability that the Germans would prevail — just as they did against Sweden in the previous game.

After all, they’re Germany, aren’t they? 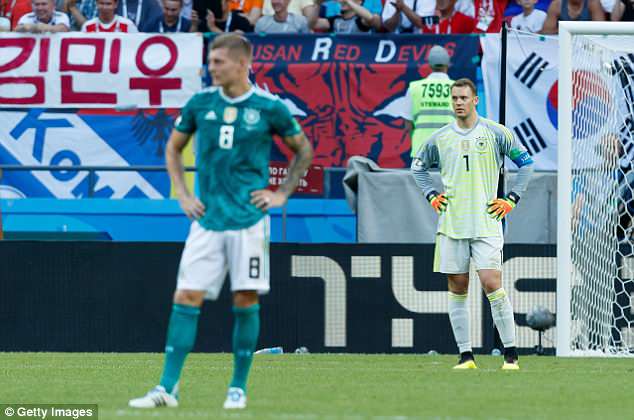 As the BBC’s Gary Lineker has always joked: ‘Football is a simple game. Twenty-two men chase a ball and at the end, the Germans always win.’

That their defeat hinged on the deployment of the VAR (Video Assistant Referee), a clinical — one might almost say ‘Germanic’ — piece of technology, only made the moment more delicious.

When the linesman raised his flag for offside, the watching millions groaned. The jammy Krauts were going to get away with it, again. But after consulting the video replays, the referee ruled that Korea’s goal stood.

Vorsprung durch Technik! When Tottenham’s South Korean striker Son Heung-min slotted the ball into an empty net to make it two-nil, you could hear the cheering around the world.

Nowhere was the volume more raucous than in the pubs, clubs, offices and living rooms where England fans had gathered with crossed fingers, hoping beyond hope that the Germans would finally get their comeuppance.

OK, so England had already qualified for the knockout rounds in style, with tonight’s game against Belgium to spare. 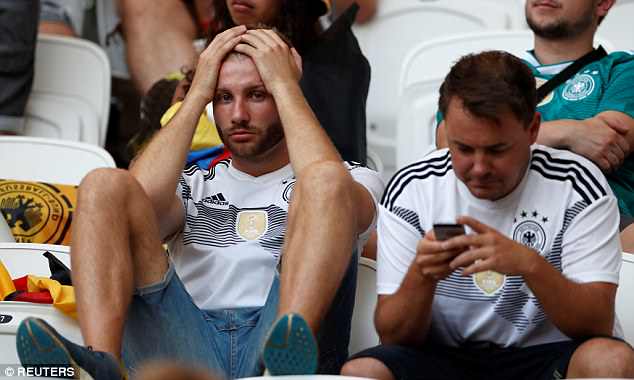 But at the back of everyone’s mind has been the unspoken fear: what if we have to play Germany in the later stages?

Despite the elan with which Gareth Southgate’s young team has acquitted itself thus far, no one back home was confident England could beat even a poor German side — especially if it went to extra time and a penalty shoot-out.

Since that glorious afternoon at Wembley in 1966, the Germans have too often been our footballing nemesis, stopping us retaining the trophy in 1970 and twice knocking England out of international tournaments on penalties.

These defeats were seared in the national consciousness, a sporting reminder of the new world order.

For the past 40-odd years, the Germans have seemed invincible — not just on the football pitch but in the political and industrial arenas, too. When England fans taunted Germany with the chant ‘Two World Wars and one World Cup’ it was mere empty bravado, disguising a deep-seated inferiority complex.

We may have won the war, but the Germans had won the peace.

Germany was the economic powerhouse that ruled Europe. 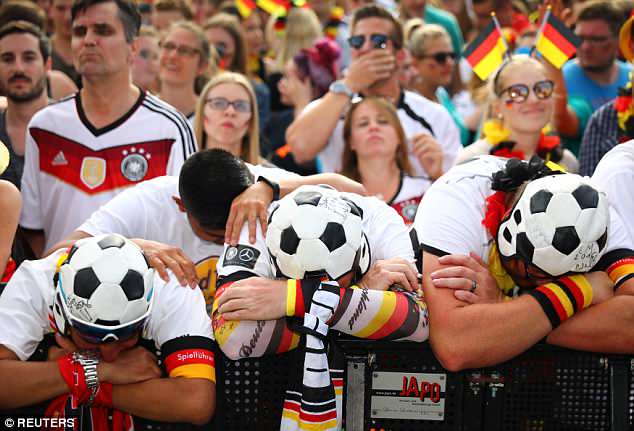 Defeatists still claim after the Brexit vote that we can’t survive outside the Berlin-dominated EU.

But the worm is turning. Germany isn’t only in trouble on the football field.

For years, Angela Merkel was mistress of all she surveyed, bending not just the Fatherland but all Europe to her will.

Now, after succumbing to a terminal attack of hubris and bringing the EU to the brink of disintegration over mass migration, Mutti Merkel’s days are numbered.

By the time the German football team return home in shame and summon up the courage to show their faces in public, she could be gone.

But be warned. This glorious sense of schadenfreude at Germany’s discomfort may not survive an England defeat at the hands of plucky little Belgium tonight.

So we must make the most of it while we can. Fill your glasses and gloat.

For you, Hans, the VAR is over. 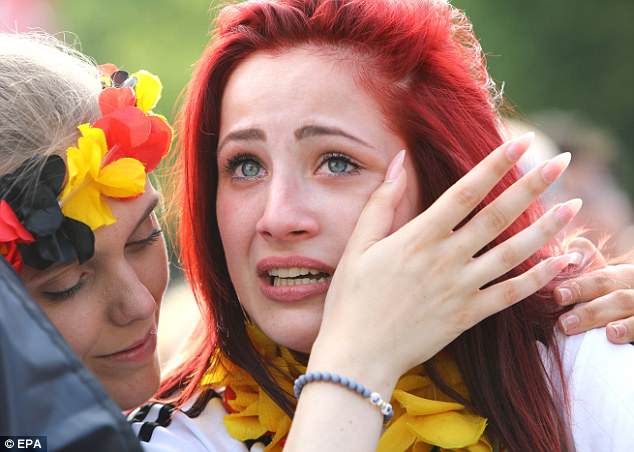