Phnom Penh: The trial in Cambodia of Australian filmmaker James Ricketson was postponed on Friday following a request from his lawyer, who was not present at the Phnom Penh Municipal Court.

Ricketson’s team requested a one-month delay, but Presiding Judge Seng Leang said a new trial date would be announced in due course.

Ricketson, 69, was arrested just over a year ago after he was photographed flying a drone above an opposition party rally near the centre of Phnom Penh. He stands accused of espionage, a charge he has repeatedly denied. 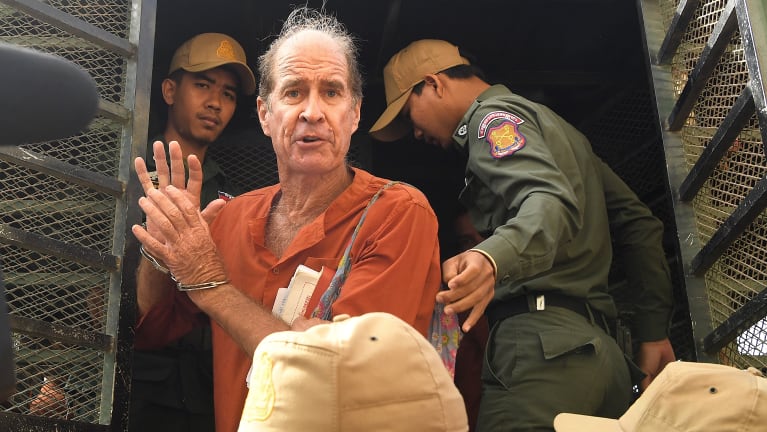 James Ricketson arriving in court for his espionage trial on Friday. He faces a 10-year sentence if found guilty.

“There is not one skerrick, not one iota of evidence,” Ricketson said in court on Friday, adding there were “serious and ongoing legal irregularities” in his case.

Prosecutor Sieng Sok claimed Ricketson had violated Article 446 of the Cambodian Criminal Code, for “collecting information that could jeopardise the national defence”.

If convicted, he faces up to 10 years behind bars at Phnom Penh’s notoriously overcrowded Prey Sar prison.

Cambodian courts follow the French system, where a judge conducts an investigation into the case before it goes to trial.

The investigating judge combed through about 25 of Ricketson’s emails on his seized computer. Several of those emails seen by Fairfax were routine journalistic questions about Sam Rainsy, the former leader of the Cambodia National Rescue Party, who is now in exile.

The CNRP was the only legitimate contender to overcome Prime Minister Hun Sen’s 33-year rule at the upcoming election on July 29, but the party was forcibly dissolved by Cambodia’s Supreme Court in November last year.

On one occasion, Ricketson was grilled on the meaning of the word “grapevine” when he asked Rainsy about a flight into Phnom Penh. 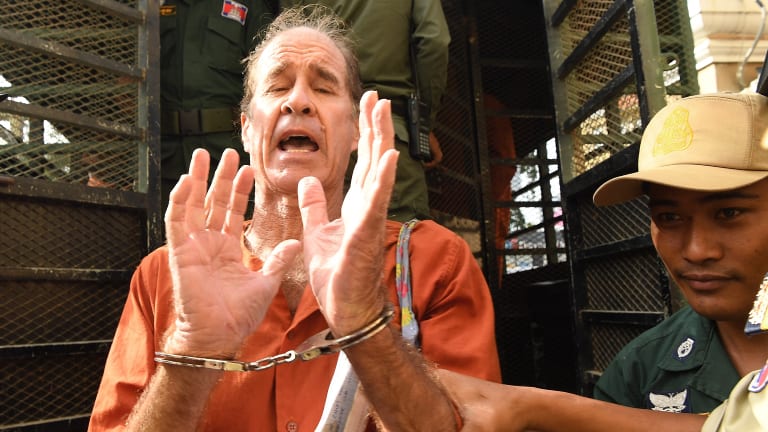 Ricketson has suffered a number of health complaints in Prey Sar prison.

Other emails were personal exchanges between friends and journalists.

Ricketson was crammed in a cell with more than 120 other inmates before being moved into the prison’s hospital in early May. He has a litany of skin complaints and an undiagnosed chest ailment.

Dressed in an orange prison jumpsuit and seated on a court bench, the visibly thinner Ricketson slid a book across the court’s tiled floor for his son, Jesse.

Jesse and his partner uprooted their lives last year to fight for Ricketson’s freedom in Cambodia.

Cambodia’s Apsara Authority this week revealed they have confiscated more than 150 drones that were being flown over Angkor Wat in the first three months of this year. No one has been arrested or charged with espionage as a result.

Two Chinese nationals were arrested briefly this week for flying a drone above the royal palace, but were subsequently released without charge.

Ricketson’s son, Jesse, said he and his family “are grateful to the Cambodian judiciary for granting a delay for the trial, such that James’ defence team has sufficient time to build a defence”.