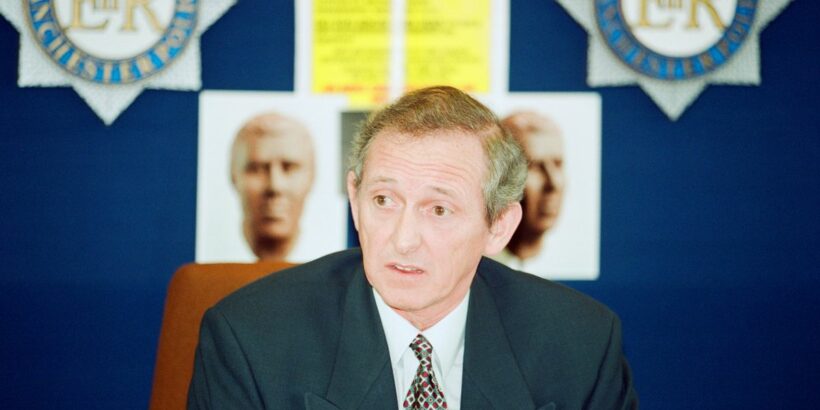 It was the gruesome discovery of a severed head found by a man walking his dog on a school playing field which sent shockwaves through a sleepy village.

On December 17, 1993, a headless body was found in Manchester. The charred body stripped except for underpants, was found under archways at Manchester’s Piccadilly station.

The shocking discovery sparked a murder investigation as police desperately tried to discover who the victim was and why he was killed in such a brutal manner.

Six weeks later the victim's head was discovered 70 miles away in the corner of a school playing field in the Staffordshire village of Cheslyn Hay.

On January 27, 1994 former school caretaker Roy Jones was out walking his dog when he stumbled upon the gruesome find.

Police later confirmed the head had been thrown from a passing travelling along the adjacent motorway.

In a 1999 interview Mr Jones said: “I was taking Mickey out for his usual morning walk when he stopped and started scratching at a small mound of earth.

“I tried to pull him away but he persisted. Seconds later, I could see something emerging from a few inches below the ground.

“When I got a closer look I was mesmerised. I walked away to collect my thoughts but then went back to take a proper look.

“At first I had thought it was a sheep’s head but then I was sure it was that of a man. "I could make out the main features but it was quite badly burned.

“I didn’t know what to think and just stood looking at the sky for about five minutes. I couldn’t believe my eyes.

“I had only gone out to take Mickey for his daily morning walk and ended up seeing the most horrific thing I’d ever come across.”

Police initially believed that Mr Jones’ imagination had run away with him but it soon became apparent it hadn't.

Shortly after he had contacted cops the area was swarming with police and forensic experts. A police helicopter hovered overhead.

Mr Jones added: “I went back up there with the police and they confirmed it was a human head.

“I was interviewed for about three hours and I later found out that officers had been round to see my wife and son-in-law to find out more about me.

“I didn’t mind because they were only doing their job, but at the time I remember my mind just being blank. Everything seemed to be in slow motion despite all the activity around me.

“I had a delayed reaction to it all, and it wasn’t until a day or so later that the shock really set in. I began to have sleepless nights and the image of the weeping and decaying head kept preying on my mind.

“I kept asking myself ‘Why did it have to be me who found it?’ and to this day I wish I hadn’t, but I didn’t regret not walking away from it – which would have been the easy thing to do.”

The discovery nearly 30 years ago sparked a murder hunt that continues to baffle detectives.

Police said the killer had gone to great lengths to disguise his victim’s identity.

The victim's face had been even repeatedly hacked with a machete. Officers at the time described the killing as “non-professional, but methodical."

But detectives made a breakthrough due to a rare metal alloy used in dental work and found out the dead man was from Kuwait.

From there, Manchester University professor Richard Meave was tasked with reconstructing the splintered skull, using clay.

The model proved something of a milestone in the murder case.

A man contacted police and said the model had an uncanny resemblance to Kuwaiti billionaire Adnan Abdul Hameed Al-Sane, a former banker who had moved to London in 1986.

Police still couldn't find a motive. There were rumours of shadowy arms deals, but with no proof they failed to find a suspect.

The Metropolitan Police realised this was to be a testing case. At a press conference on October 27, 1994, a spokesman had to admit that the vast majority of questions remained unanswered.

The Met spokesman said: “Even at this stage there is a possibility that someone, somewhere has information about Mr Al-Sane that we could use to our advantage."

There was another fresh appeal by police for information back in 2014 when detectives said they were still committed to finding the assassin.

News of the decapitated head on open land caused shockwaves in the sleepy village of Cheslyn Hay.

The mutilated victim, it soon emerged, was something of an enigma.

The clay head was meant to jog the public’s memory but it didn't.

A team of detectives discovered that Mr Al-Sane, who lived alone in an upmarket Maida Vale, West London, flat, had last been seen on December 14.

The 46-year-old had dined with a Kuwaiti business colleague at the Britannia Hotel, Grosvenor Square, leaving at midnight to take a taxi home.

After that, nothing. They believe he made it home and was snatched from his flat.

Surprisingly, the savage murder received little press coverage in the UK but was much bigger news abroad.

Italian publication Corriere Della Sera described Mr Al-Sane as a billionaire who retired from banking at the age of just 38. He spent his time playing the stock market and visiting casinos.

Reporter Riccardo Orizo speculated: “This was a lifestyle maybe a little too quiet for a man who had known the chills of high finance.”

Mr Al-Sane also had links to Kuwait royalty. One theory is that the killing was linked to a high-powered financial feud in Kuwait, and Mr Al-Sarne’s death warrant was signed in that country.

There was another fresh appeal by police for information back in 2014 when detectives said they were still committed to finding the assassin.

But the mystery of why he was killed and who his killer was remains unsolved to this day.