A violent scuffle broke out on the Champs-Elysees boulevard in the French capital today as thousands of anti-government demonstrators gathered in the capital. 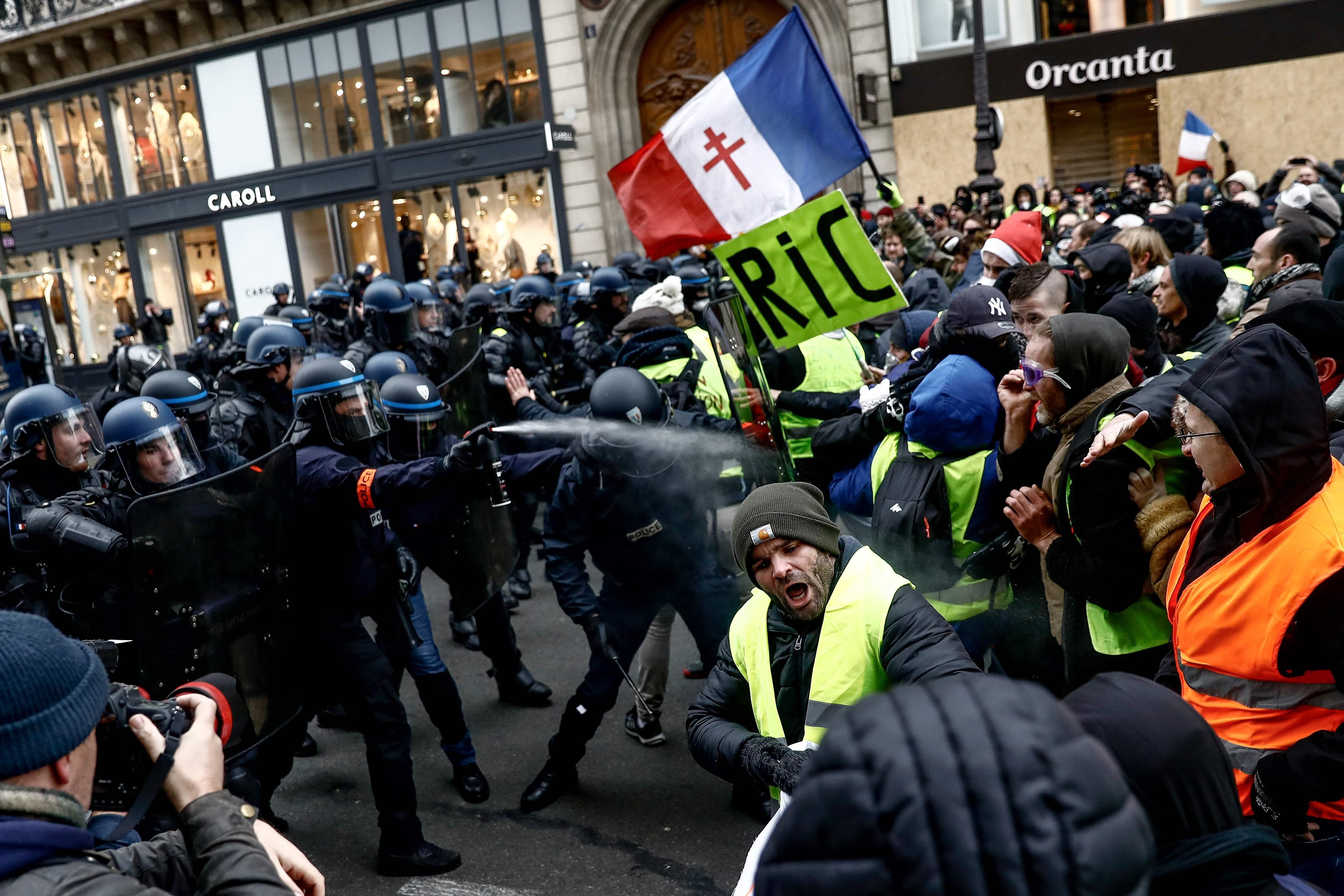 The Interior Minister said around 69,000 police officers were active today with a reinforced presence in the cities of Toulouse, Bordeaux and Saint-Etienne.

Riot cops were positioned around central train stations and along the famed Champs-Elysees, where shops were closed and their windows boarded up in anticipation of the violence.

Protesters have ignored calls from Emmanuel Macron's government to suspend the demonstrations following a shooting in Strasbourg earlier this week.

Today marks the fifth straight weekend of demonstrations by the Yellow Vest movement, which takes its name from the fluorescent safety vests French motorists carry in their vehicles. 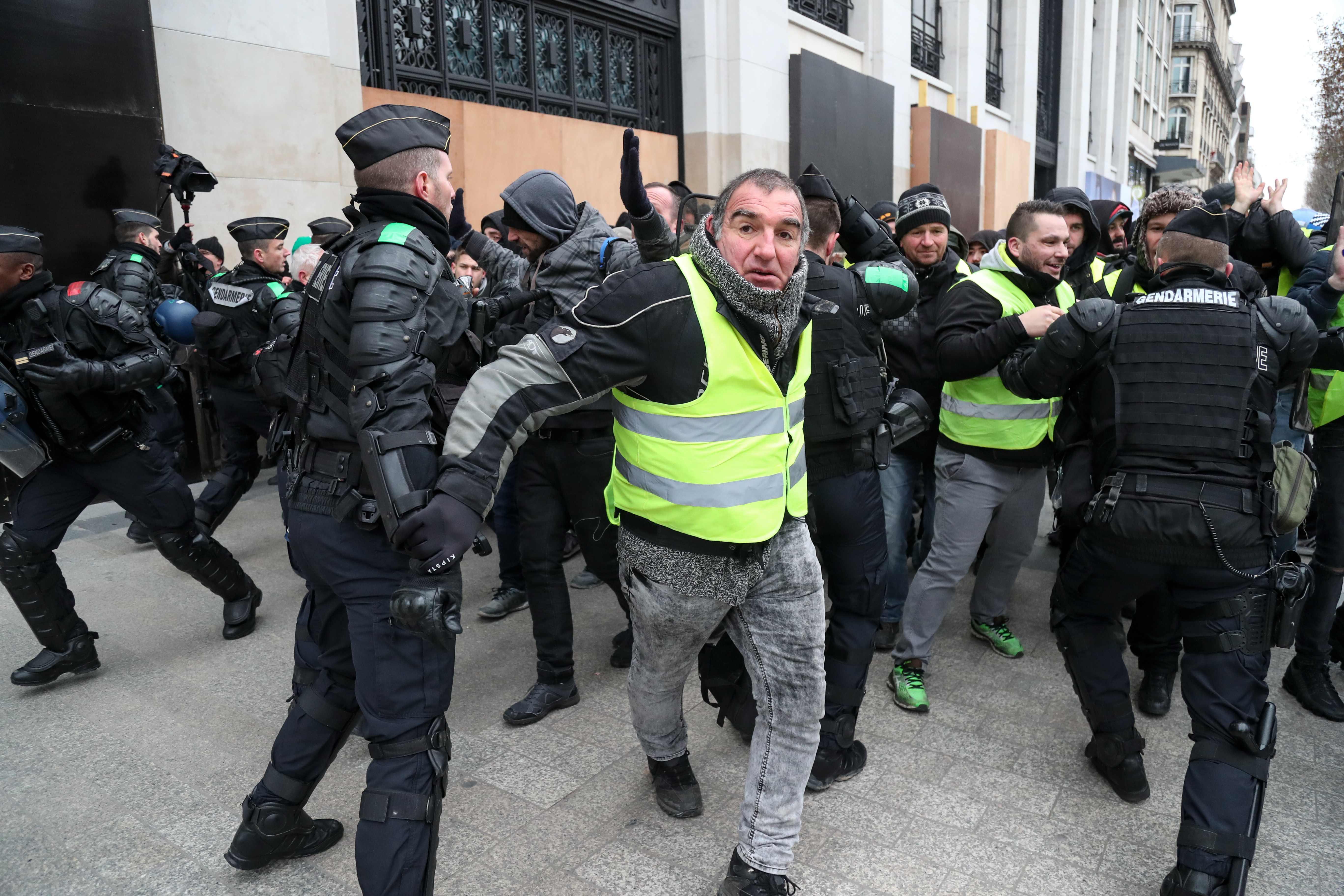 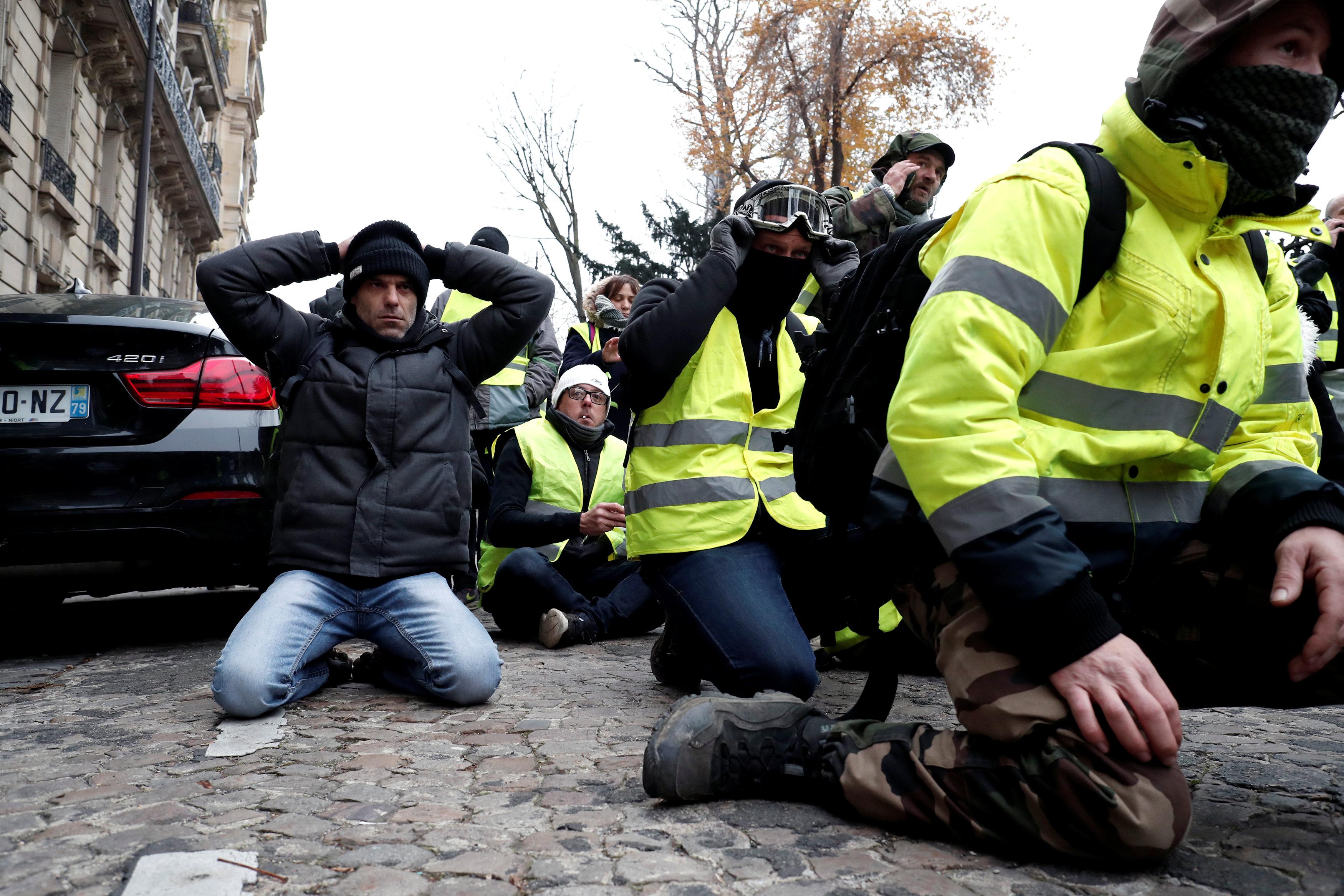 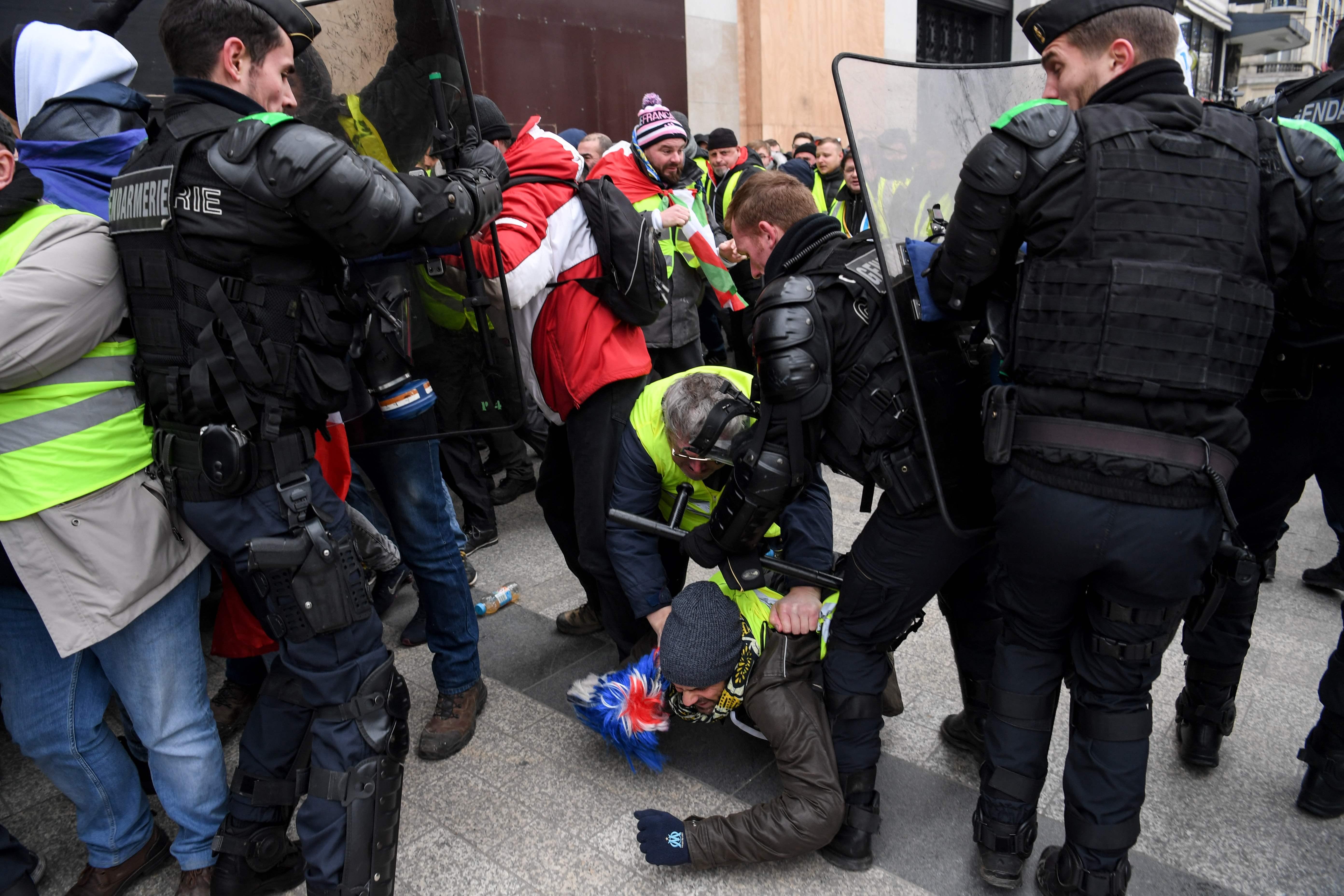 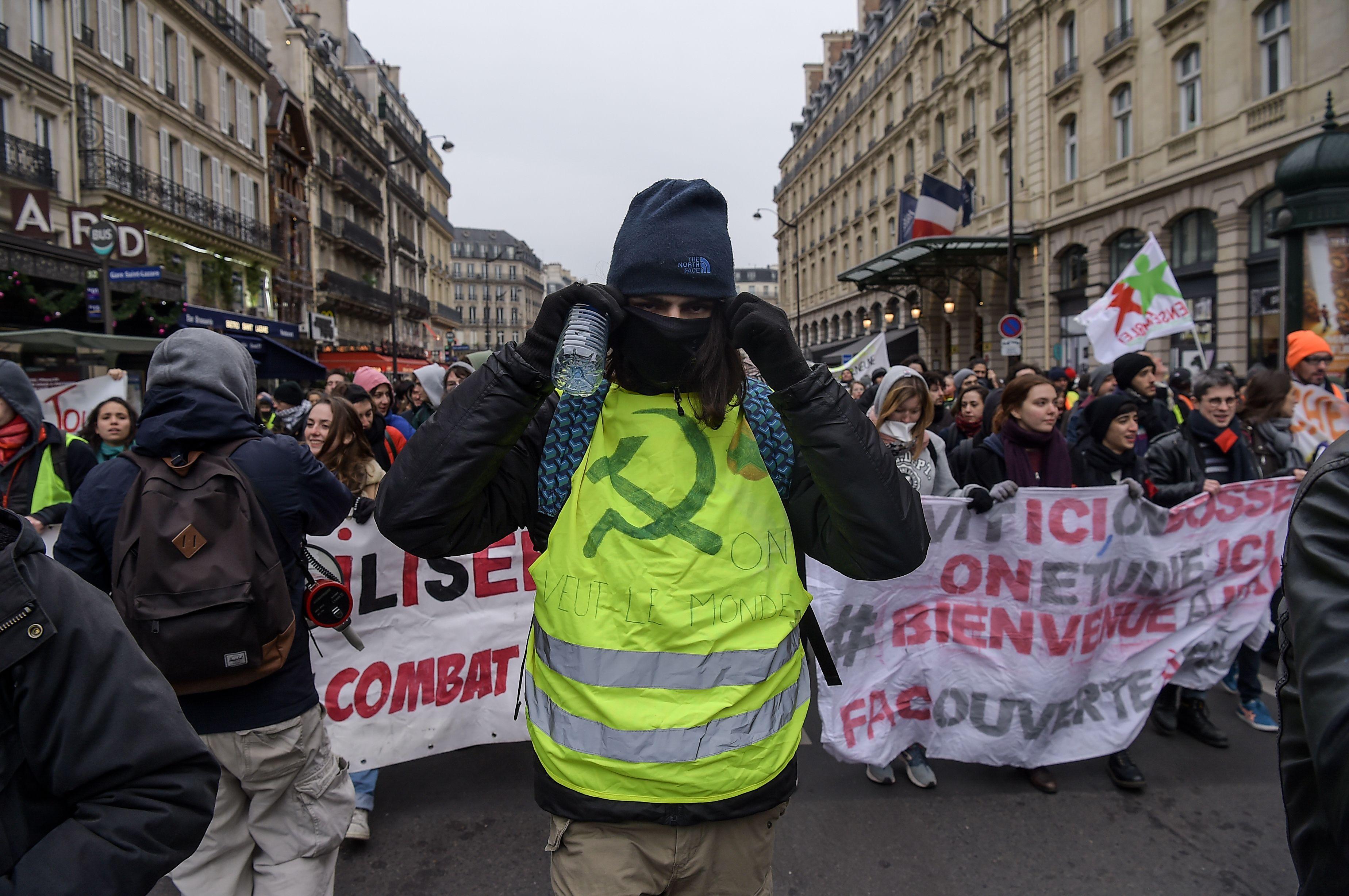 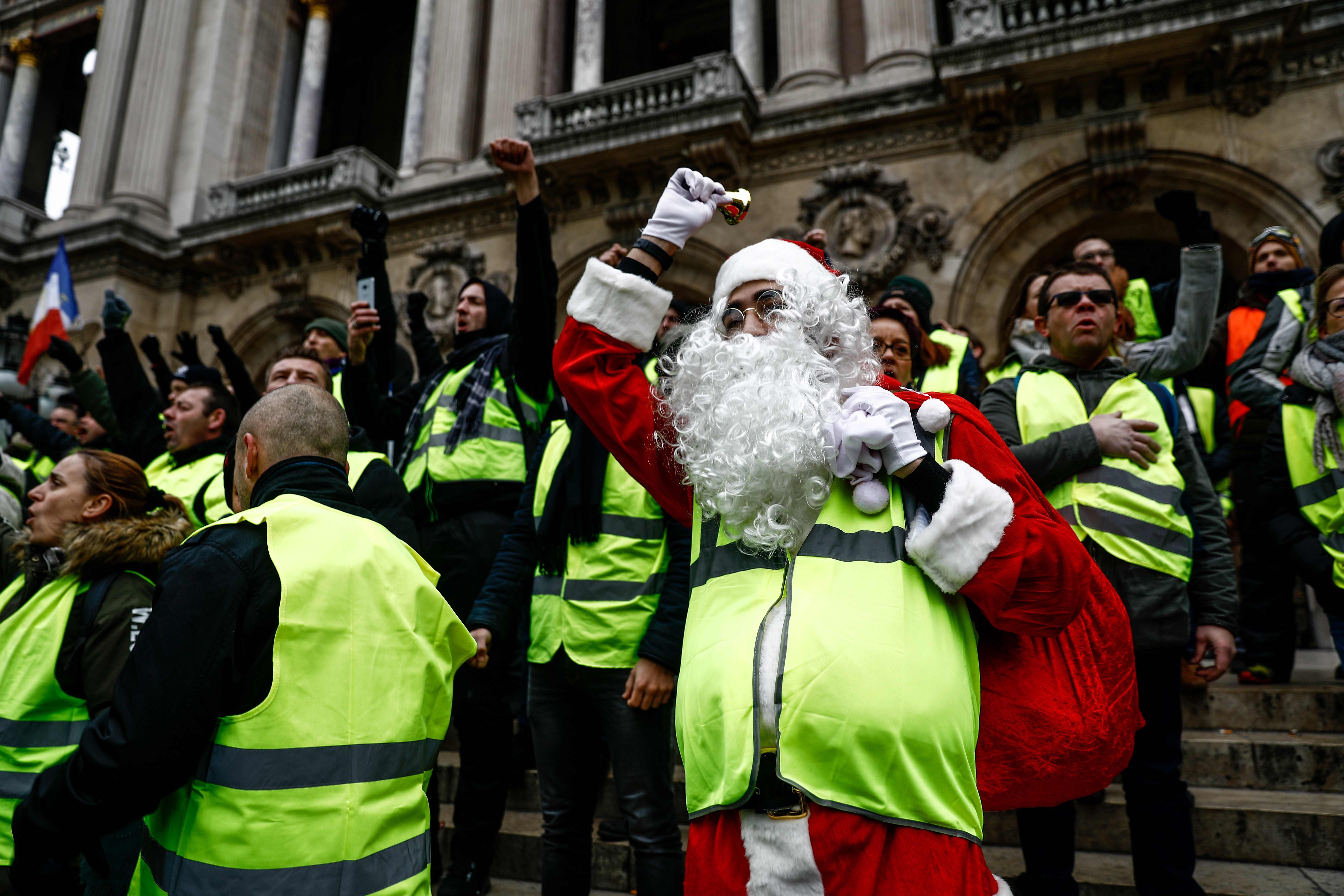 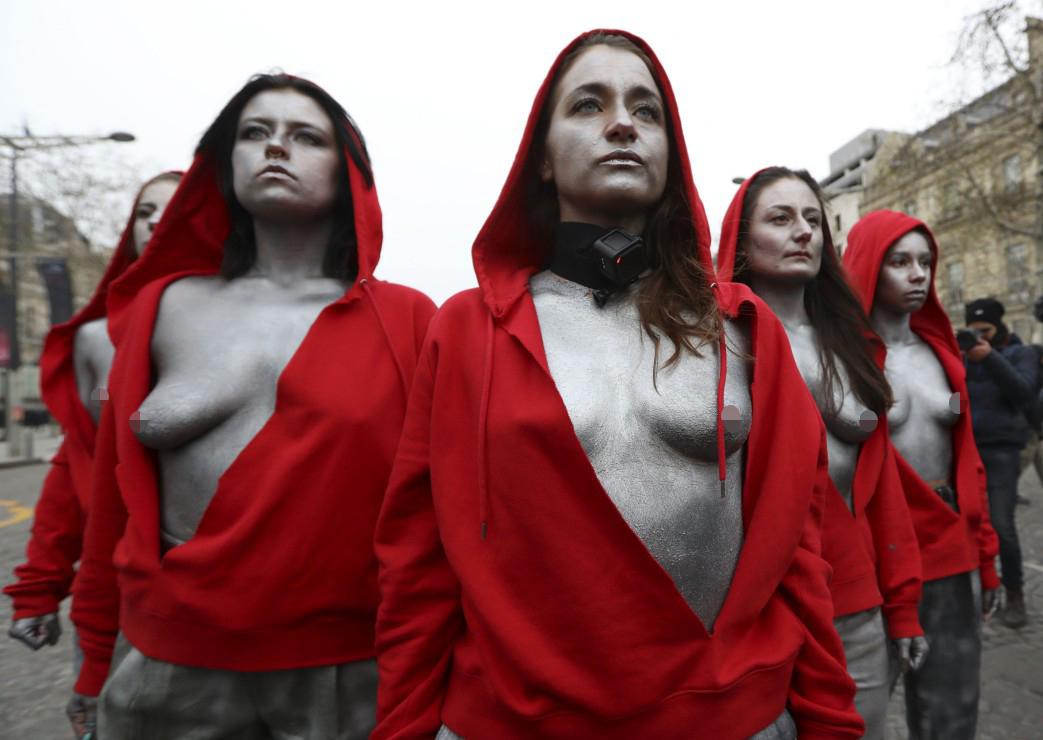 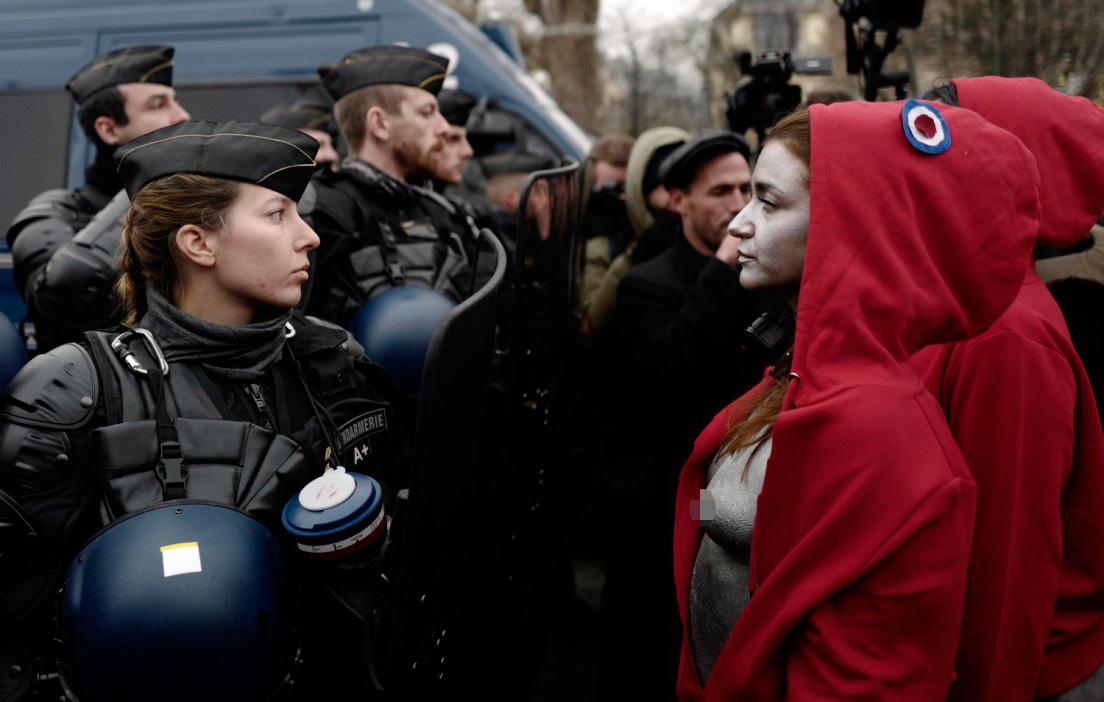 It emerged in mid-November as a protest against fuel tax increases and morphed into an expression of rage against the government.

The fighting was stopped quickly this morning while protesters began marching toward the landmark Arc de Triomphe at the end of the avenue.

On the Champs-Elysees, a handful of topless activists from the feminist protest group Femen faced cops near the Elysee Palace, the president's residence.

Successive weekends of protests in Paris have lead to vandalism and violent clashes with security forces. 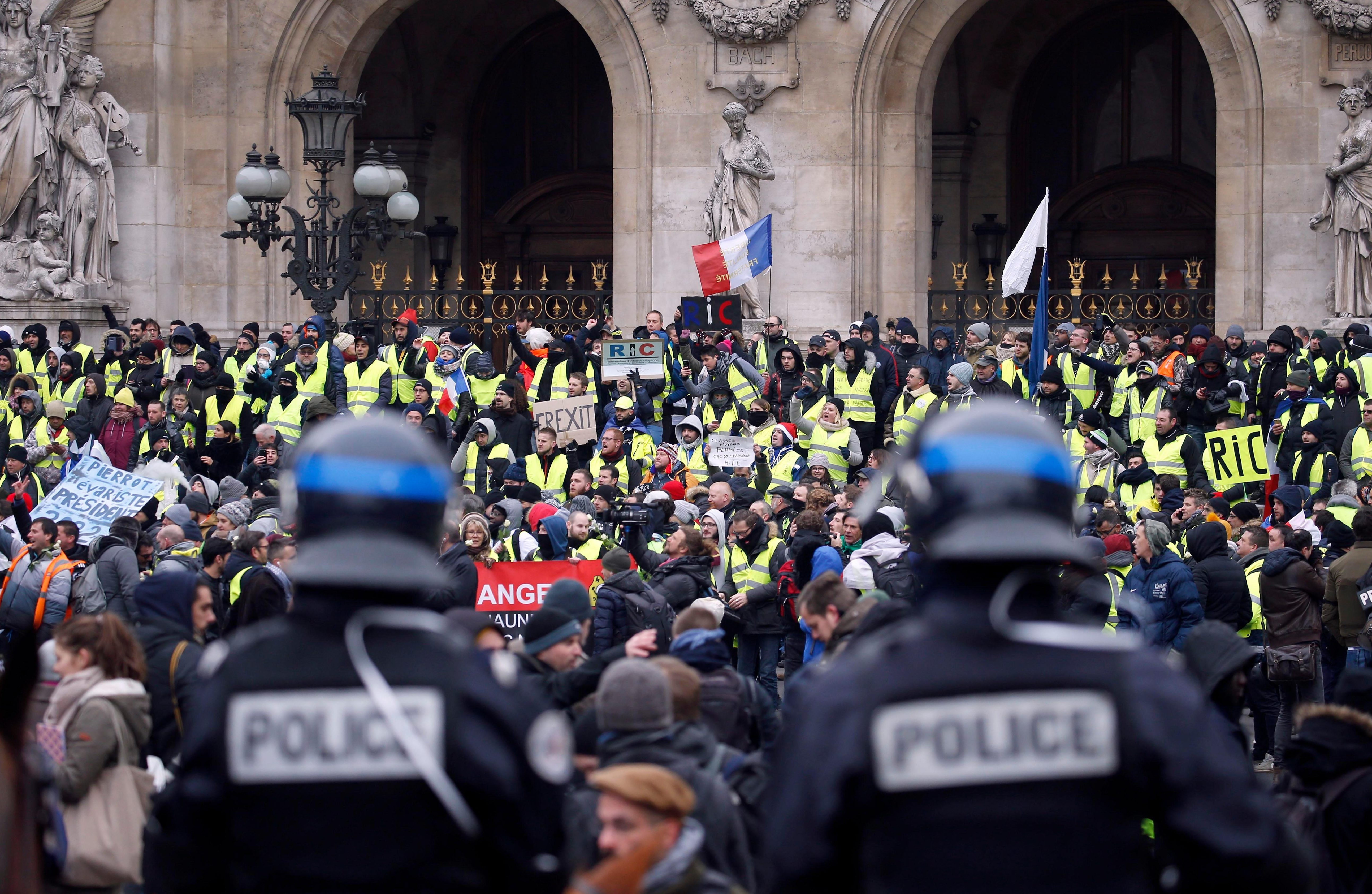 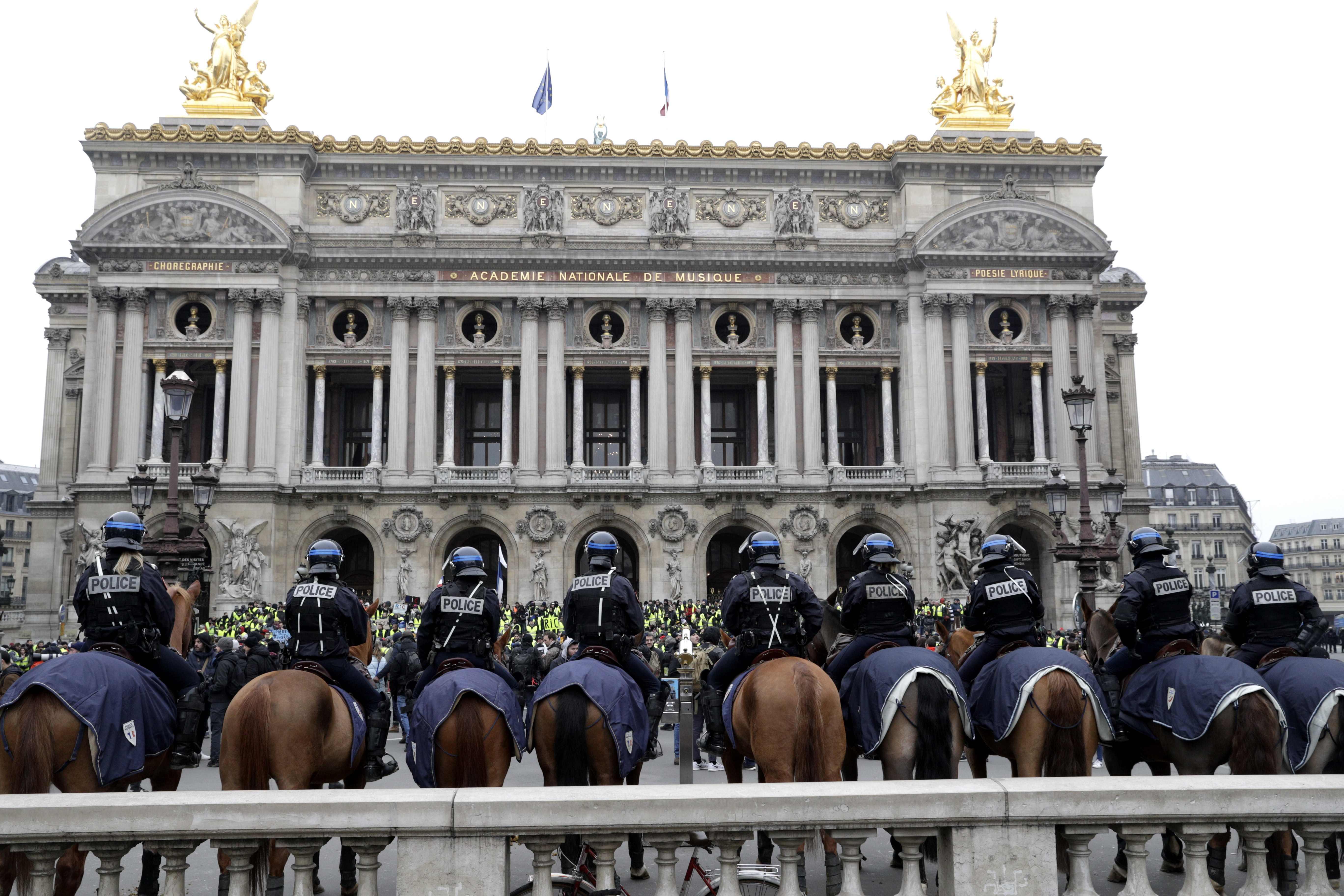 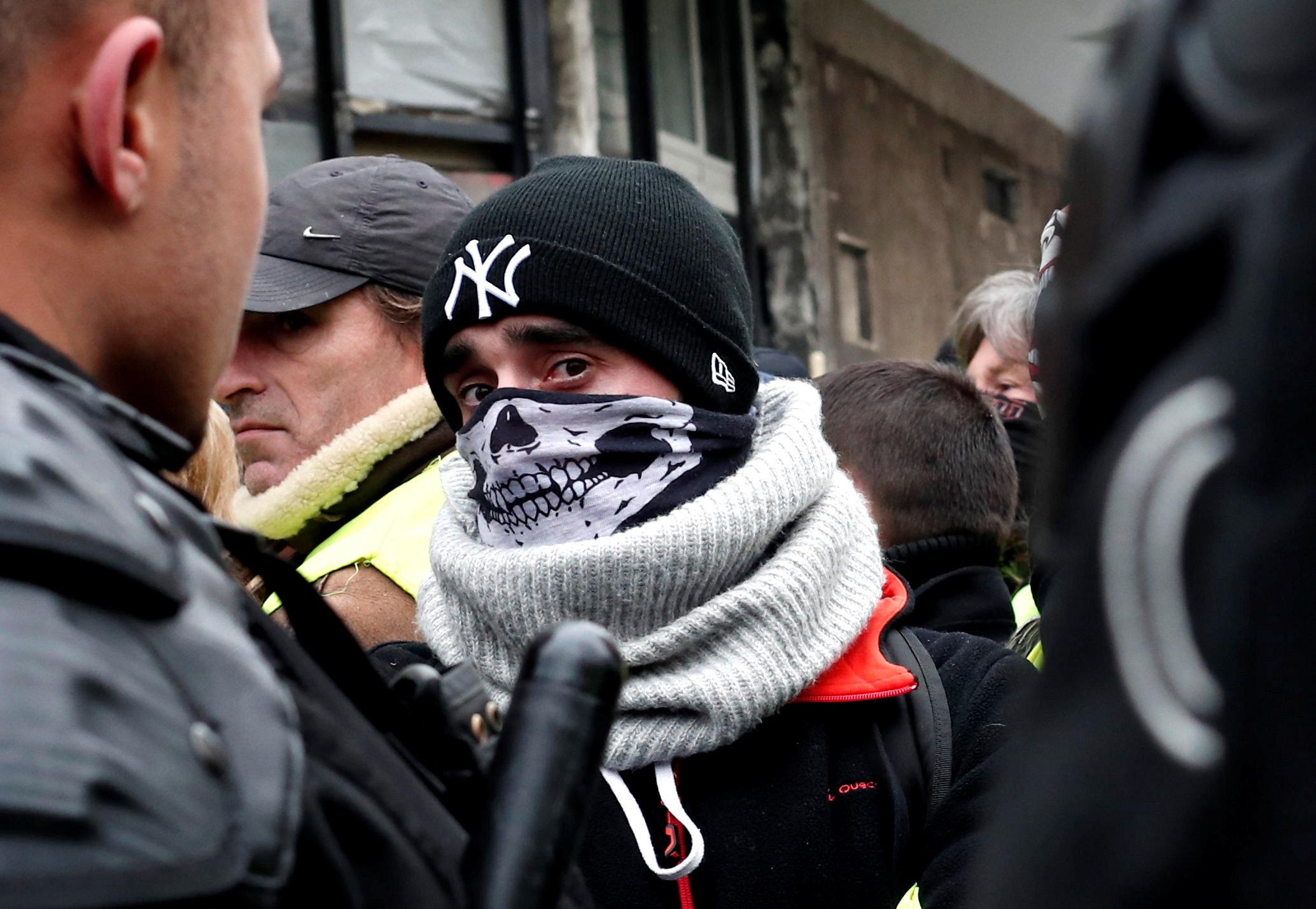 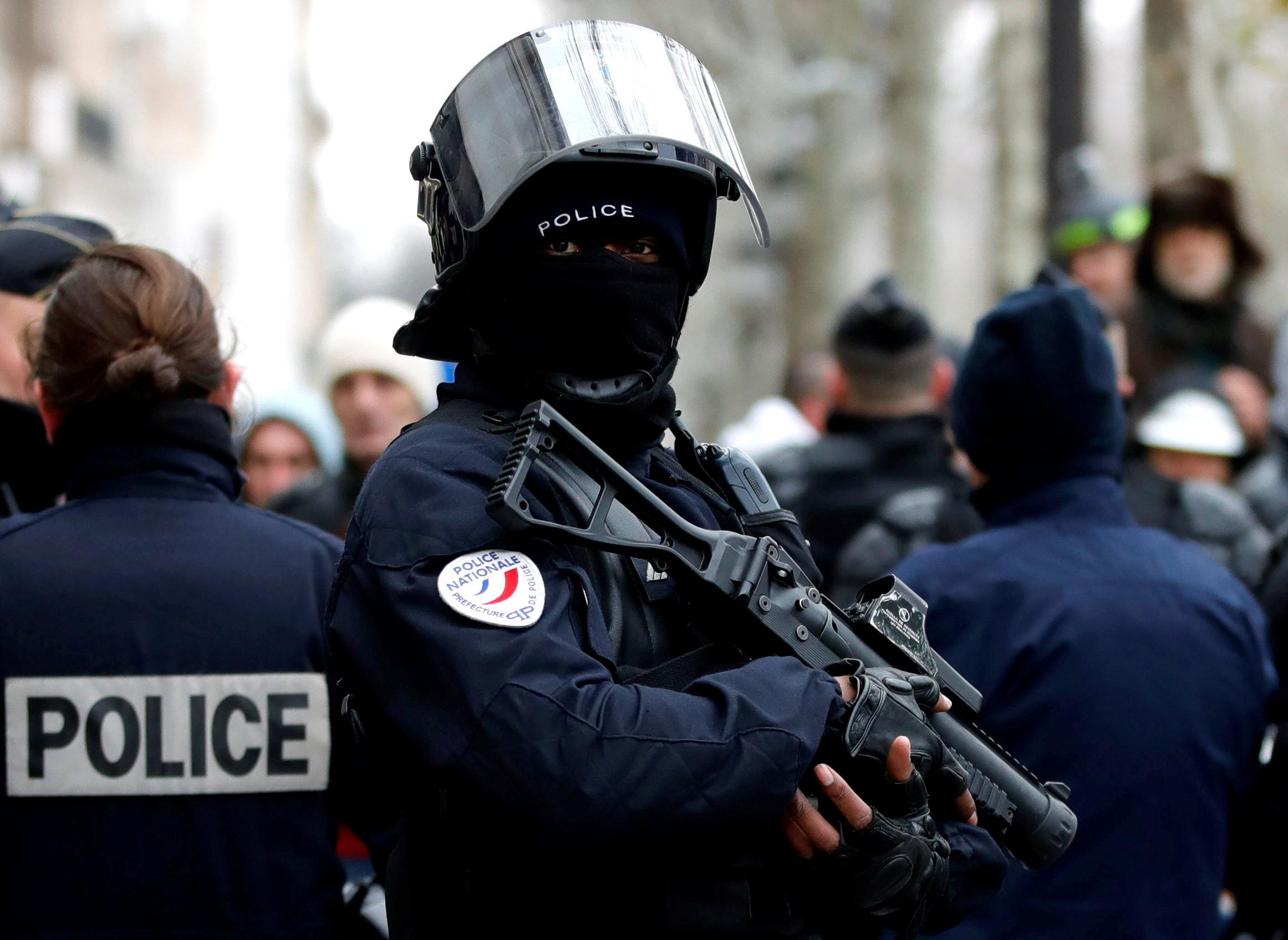 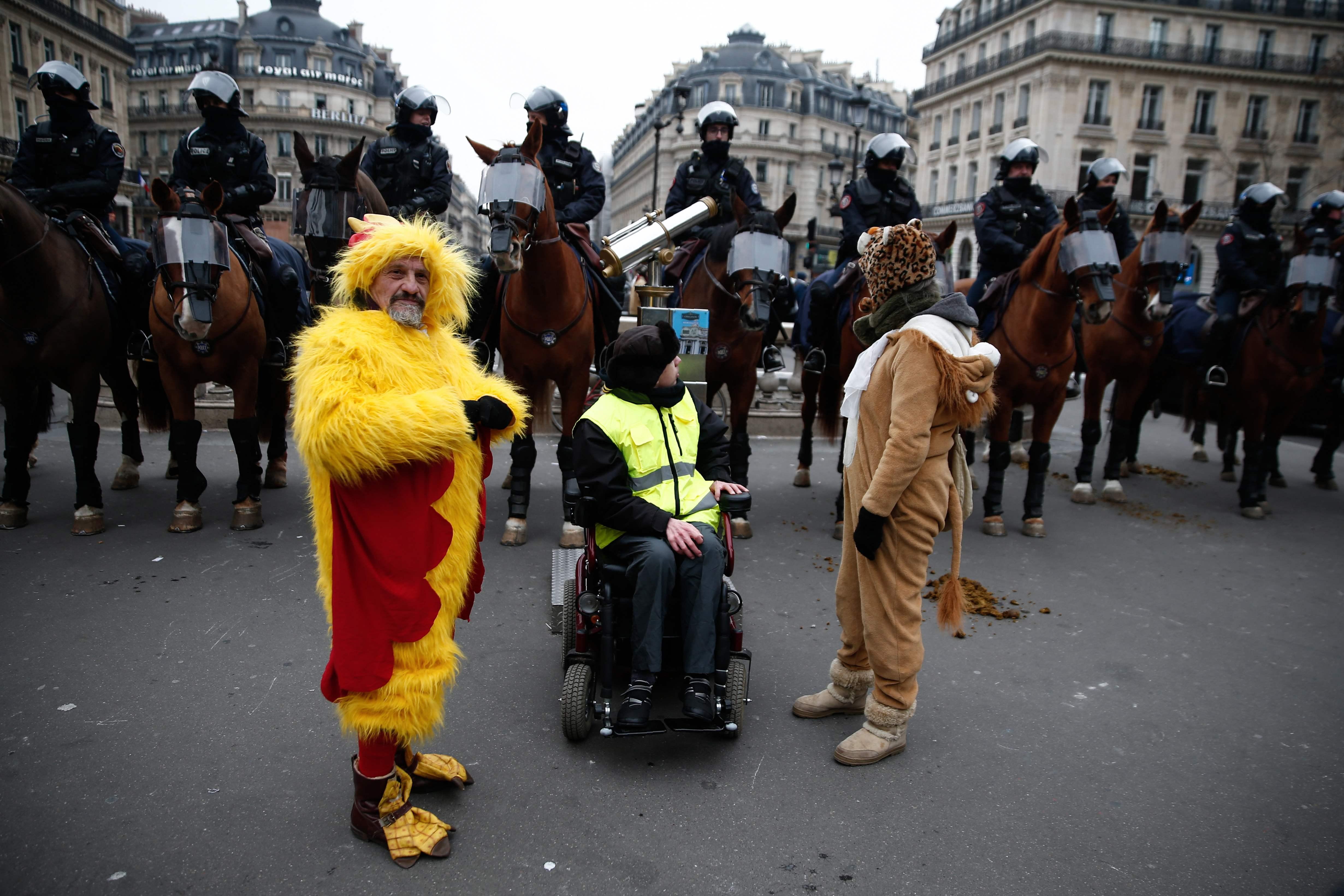 "France needs calm, order and a return to normal," President Macron said, after a meeting of European Union leaders in Brussels.

In a televised address to the nation on Monday, the French leader announced wage rises for the poorest workers and tax cuts for pensioners in further concessions meant to end the movement but many said they would maintain pressure.

The government, as well as several unions, called on protesters to stay off the streets today after four people were killed in a gun attack at a Christmas market in Strasbourg.

Who are the yellow vests?

Since the movement kicked off on November 17, three people have been killed and hundreds injured in clashes or accidents stemming from the protests.

In the past three weeks, demonstrators have been setting up roadblocks across the country and their movement has won wide public support.

Riot police were overrun during the first weekend in December as protesters wrought havoc in Paris's wealthiest neighbourhoods.

Demonstrations flared up once again on December 8 with an estimated 5,000 taking to the streets for a "Day of Rage".

Rioters burned dozens of cars, looted boutiques and smashed up luxury private homes and cafes in the worst disturbances the capital has seen since 1968.

The movement was organised online and has no clear leadership, making talks all the more complicated for the government.

Its supporters cut across age, job profile and geographical region.

Most want the government to scrap the new fuel taxes, hold a review of the tax system and raise the minimum wage.

There have also been calls to roll back Macron’s tax cuts for the wealthy and his economic programme, which is seen as pro-business.

One of the eight spokesmen for movement Christophe Chalençon called on President Macron to resign.