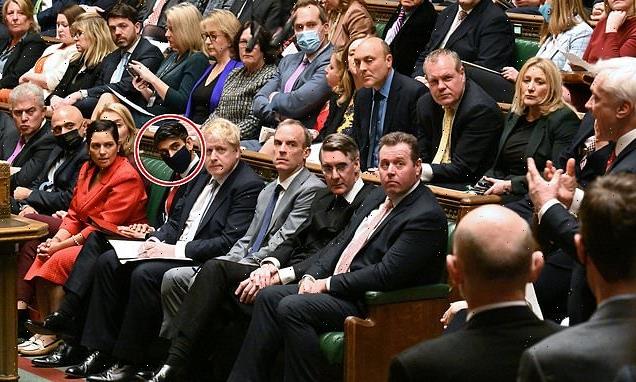 So THAT’S what Rishi was masking: Chancellor sat in Commons after a member of his close family tested positive for Covid – despite official guidance ‘strongly advising’ people to limit close contact with others

Rishi Sunak sat in a tightly-packed House of Commons on Monday for Boris Johnson’s Partygate apology despite one of his close family members testing positive for Covid.

The chancellor sat beside the prime minister and Priti Patel during the fiery session as Mr Johnson delivered a statement on Downing Street parties throughout lockdown.

Official guidance is currently ‘strongly advising’ people to limit close contact with other people if someone in their household has tested positive for the virus. 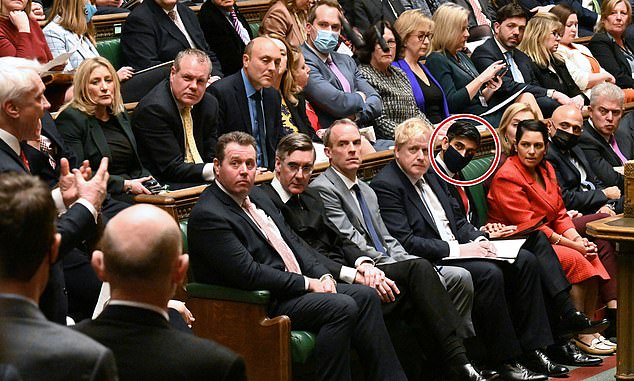 Later that day, foreign secretary Liz Truss, who was sitting two seats down from Mr Sunak, revealed she had tested positive.

Treasury insiders told The Mirror that Sunak felt it was important to be ‘visible and supportive’ of the government on such a crucial day when Sue Gray’s report was delivered.

On Monday, Mr Sunak then attended a meeting of the Tories’ backbench 1922 committee with many of his party colleagues.

The following day, he led Treasury questions in the House of Commons. 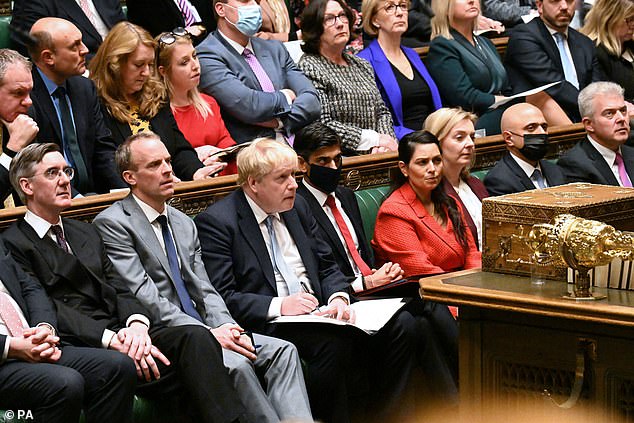 Mr Sunak wore a facemask throughout the proceedings in the chamber on Monday and had tested negative before Johnson’s statement.

It is no longer a legal requirement to stay at home if someone in your household tests positive for Covid.

But official NHS guidance says you should ‘limit close contact with other people outside your household, especially in crowded, enclosed or poorly ventilated spaces’.

The guidance also recommends working from home if it is possible.

Insiders denied that Mr Johnson had set a precedent for ministers for deciding to isolate when his daughter tested positive.

A spokesman for Mr Sunak told The Mirror: ‘The Chancellor has followed the legal requirements to the letter.

‘He has taken daily lateral flow tests and has limited his social contact where possible, whilst also ensuring that he is able to continue to conduct important Government and Parliamentary business as the public would expect.’

Liz Truss was forced to miss her trip to Ukraine this week after testing positive following Monday’s Commons session.

The Foreign Secretary tweeted: ‘I tested positive for Covid this evening.

‘Thankfully I’ve had my three jabs and will be working from home while I isolate.’

After appearing in the Commons, Ms Truss then later attended a meeting open to all members of the parliamentary Conservative party where the PM addressed MPs and peers to rally support after what was described as a “difficult day”.

The Foreign Secretary had been due on a visit with Mr Johnson on Tuesday, for a meeting with Ukrainian president Volodymyr Zelensky amid rising tensions with Russia.