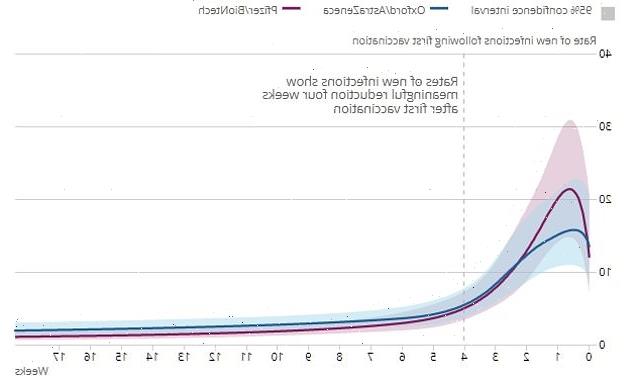 Risk of Covid plummets three weeks after first vaccine dose and continues falling for MONTHS, analysis suggests – with only one in 1,000 people catching the virus after two jabs

Someone’s risk of Covid plummets three weeks after their first vaccine and continues to fall for months afterwards, an official analysis has revealed.

A report by the Office for National Statistics today found there was a ‘meaningful reduction’ in the risk of someone testing positive from 21 days post-vaccine.

Its survey found that just 0.6 per cent of people tested positive for coronavirus in the six months after getting vaccinated and they were less likely to have symptoms.

One in 200 people tested positive after their first dose while only one in 1,000 caught the virus after having had two doses of a jab.

The report did not compare the rates with an unvaccinated population but followed 300,000 people after vaccination from the start of December to the end of May.

During that time, 2,873,601 people tested positive through NHS Test & Trace, suggesting the overall infection rate over the same period was around 4.3 per cent – seven times higher than it was among vaccinated people.

Younger people working in the NHS or in care homes were more likely to test positive after a jab – the same as in unvaccinated people, which the ONS said was likely ‘reflecting greater occupational exposure’. The same was true of people living in poorer neighbourhoods or larger households.

A total of 42.2million people have had their first vaccine dose and a further 30.7m have had both jabs. The programme will tomorrow open to all over-18s in England. 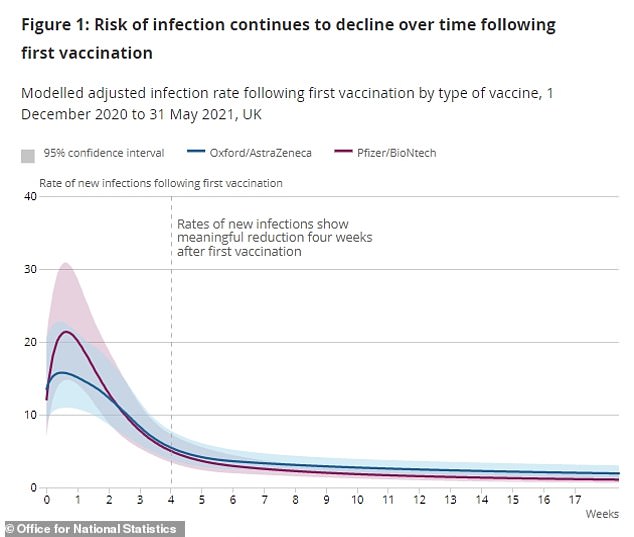 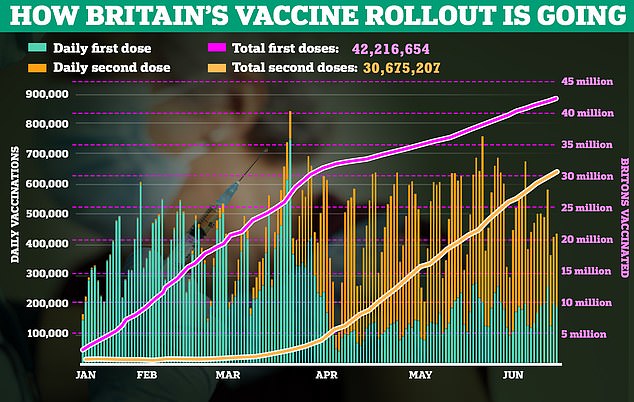 The ONS report said: ‘The risk of identifying a new infection following vaccination was highest during the first 21 days after the first vaccination, after that the risk strongly decreased.

A first vaccine dose is known to give some immunity against Covid but this effect is thought to have been weakened by the takeover of the Indian ‘Delta’ variant.

The most recent Public Health England figures suggest a single jab now prevents only around one in three cases, compared to more than half against older variants.

ONS experts found the risk of testing positive for the virus actually goes up for a short while after someone gets their first jab.

They suggested: ‘Possible explanations for infections shortly after vaccination include exposure to Covid-19 at vaccination centres, change in behaviour following vaccination, or prompts to get vaccinated because of knowledge of individuals around them testing positive.’

They said many of the people testing positive shortly after their jab likely caught the virus before the injection but didn’t get a positive test until later. 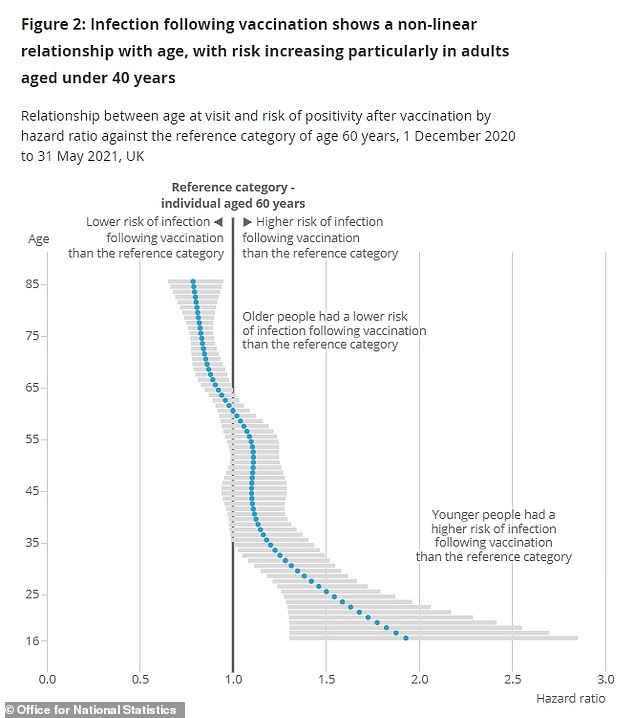 Younger people working in the NHS or in care homes were more likely to test positive after a jab – the same as in unvaccinated people, which the ONS said was likely ‘reflecting greater occupational exposure’. The same was true of people living in poorer neighbourhoods or larger households

The report comes as Matt Hancock confirmed that the NHS vaccine rollout will expand to include everyone aged 18 and over from tomorrow morning.

Speaking at an NHS conference earlier today the Health Secretary said: ‘As of this afternoon we have given a first dose of vaccine to four out of every five adults in the United Kingdom.

‘And the speed of deployment means that tomorrow we can open vaccination to everyone over the age of 18.

‘I think it’s an incredible achievement on the vaccination side.’

Speaking at a separate NHS conference on Tuesday, Sir Simon Stevens — the head of the health service — said: ‘It is now very important that we use the next four weeks to finish the job to the greatest extent possible for the Covid vaccination programme, which has been a historic signature achievement, in terms of the effectiveness of delivery by the National Health Service with over 60million doses now administered.’

More than four fifths of adults have now had a first vaccine dose as the rollout continues at pace. Some 195,565 first doses were dished out today, taking the country’s total to 42.2million.

And 234,834 second jabs were put in people’s arms yesterday, taking the total number of fully vaccinated adults to nearly 30.7million (58.2 per cent).

UP TO 16,000 PEOPLE MAY HAVE CAUGHT COVID TWICE, PHE SAYS

As many as 16,000 people in England may have caught Covid twice, Public Health England said today.

Only 53 cases of reinfection have been confirmed by scientists but another 16,371 have been listed as ‘possible’ or ‘probable’ by the health chiefs.

How often people actually get the virus more than once remains a mystery to scientists and cases are rare but certainly possible.

Today’s report – the first time PHE has estimated the scale of two-time infections in the UK – suggests the risk of it happening is vanishingly rare at a maximum of 0.3 per cent of people who ever test positive.

Most people struck down a second time were elderly, the data showed, which likely reflects the facts that old people’s immune systems don’t build immunity as well.

Dr Susan Hopkins, a PHE infectious disease boss, said: ‘The rate of Covid reinfection is low [but] it is important that we do not become complacent about this.’

New variants of the virus raise the risk of someone being reinfected because immunity from past infections or from vaccines works less well against them.

Oxford University scientists today published a paper that found some people had ‘no evidence of immune memory’ six months after illness and that others’ immune systems were likely even weaker in the face of new variants of the virus. 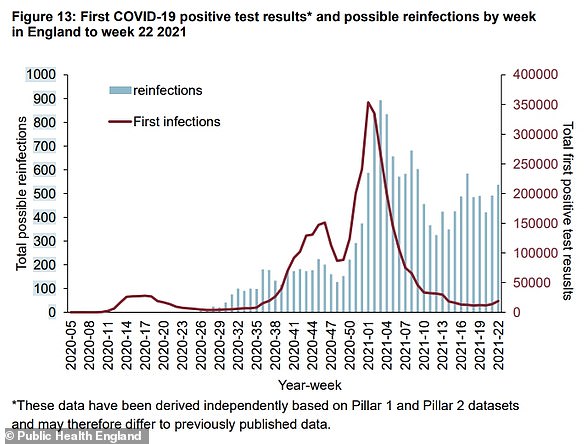 Public Health England data showed the peak of possible reinfections coincided with the take-over of the Kent variant in January, with up to 900 second cases at the same time as 350,000 first infections, suggesting the rate is incredibly low