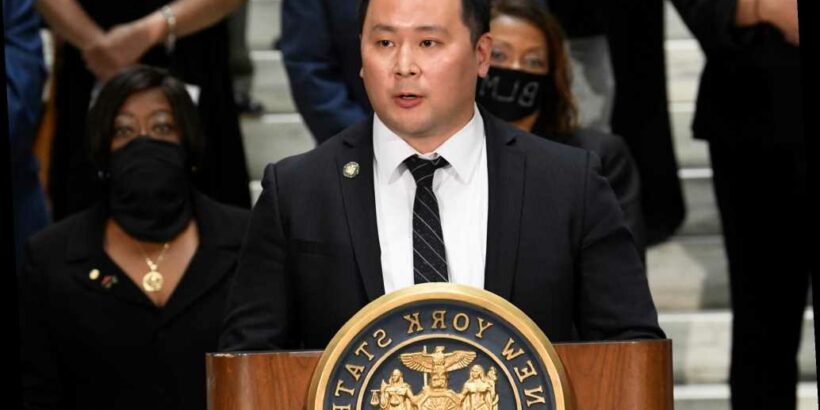 ‘Waking up is like an earthquake’: Extreme symptoms of COVID long-haulers

Gov. Andrew Cuomo must be held accountable for his administration’s botched handling of COVID-19 in nursing homes and adult-care centers, state Assemblyman Ron Kim said Sunday — at a Brooklyn memorial for the more than 15,000 facility residents believed to have died from the virus.

Addressing dozens of mourners who came out to the emotional event on Henry Street in Cobble Hill, Kim (D-Queens) recalled a phone call he received from Cuomo allegedly threatening that his political future would be “destroyed” unless he shilled for the administration’s accounting of the death toll.

“When I got that call from Gov. Cuomo threatening me and my career, my livelihood, to lie for him, I wasn’t scared of his bully tactics,” Kim said. “But I was afraid that he would escape accountability.

“This is about decency,” continued Kim. “And a decent man uplifts those who are not in power. … That’s what this is about: This is about decent human beings coming together, taking on the most powerful politician in the state of New York.”

Cuomo has denied threatening Kim during the call.

The memorial service was held nearly one year to the day after Cuomo’s Department of Health issued a March 25, 2020, mandate forbidding nursing homes from turning away residents on the sole basis of a COVID-19 diagnosis — even as the governor repeatedly acknowledged seniors’ vulnerability to the virus.

And last month, as first reported by The Post, top Cuomo aide Melissa DeRosa was caught on tape admitting to state Democratic leaders that the administration obscured the extent of the death toll among nursing-home residents because it feared a federal probe.

“Together, decency will win,” said Kim, whose uncle, US Army veteran Son Kim, was among the 15,540 residents of nursing homes or adult-care facilities to die of a confirmed or suspected case of coronavirus through March 19. “Together, we will get to the truth.

“And that’s why I know, I know that this governor will be held accountable,” he continued. “That I know that his reign of abusive power will end soon. Because there are way too many decent people in the city of New York to let this guy go unchecked.”

The federal Department of Justice is probing the Cuomo administration’s accounting methods over the deaths, and the fuzzy math may also feature in an ongoing state investigation as a possible prelude to the governor’s impeachment.

“Who in their right mind can go into a press conference and say, ‘Who cares where they died?’” asked Kim, referencing a January briefing in which Cuomo tried to downplay the extent of the coronavirus’s toll. “Who talks like that about older adults?

“A coward. One hundred percent, a coward. An abuser. Someone who abuses their power would say that,” continued Kim. “So we’ve had enough. We will mourn. We will hold hands. We will share our traumas. But we will get to a just place.”