Stuart wrote: "Looking for a young lad who wants a job. Roofing. In the Stansted area.

"Driving licence be good but not essential. No lazy little s**** who want £100 a day and sit on their phones. Must have good personal hygiene and no lip. Re tweets appreciated."

Users quickly slammed him for not including women in his job profile.

One wrote: "What’s wrong with a young woman? You know that’s in breach of the law don’t you? Widen your search, you might be pleasantly surprised what women are capable of."

Another added: "Have you heard of gender equality? Maybe a young lass could be considered?"

But Stuart has defended the tweet, telling Sun Online: "It's madness. I really don't get why people get so offended by it. It's crazy." 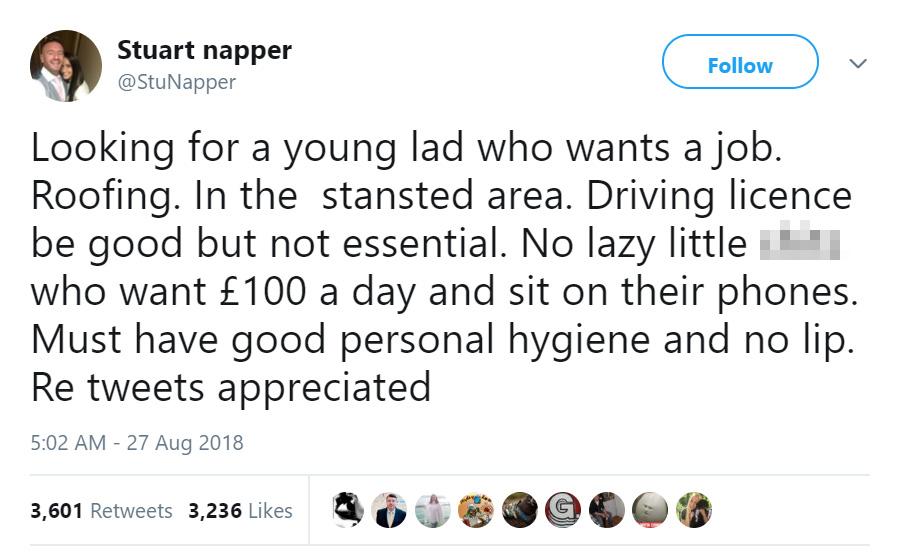 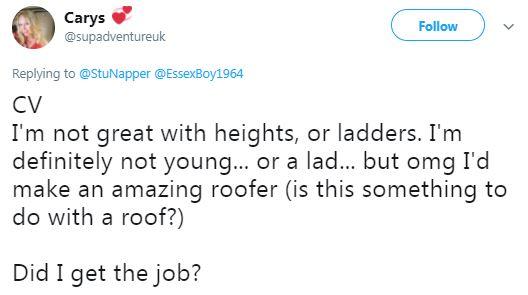 One user said: "Before you find yourself in too much trouble..speaking as a female farmer!

An advert that indicates that only people of one sex are eligible for selection is discriminatory and unlawful, unless an occupational requirement applies. Does it?"

But the dad-of-six, from Essex, refused to back down, replying: "You know any women who can carry 60kg up a ladder then a roof?? Send them my way and I’ll happily employ them."

He added: "Yes will only consider males. Unless the woman is a world class body builder she won’t be able to lift half the stuff. Not sexist just fact. I got 4 daughters so I’m all about equal rights etc etc but sometimes women can’t do it."

And some showed their support for the builder, writing: "Came across this accidentally, cannot believe where it has gone to,what a ridiculous situation social media has led us to."

Another added: "This has to be one of the funniest threads I've seen on Twitter for a while. This is what job ads used to be like before the pc brigade took over!"