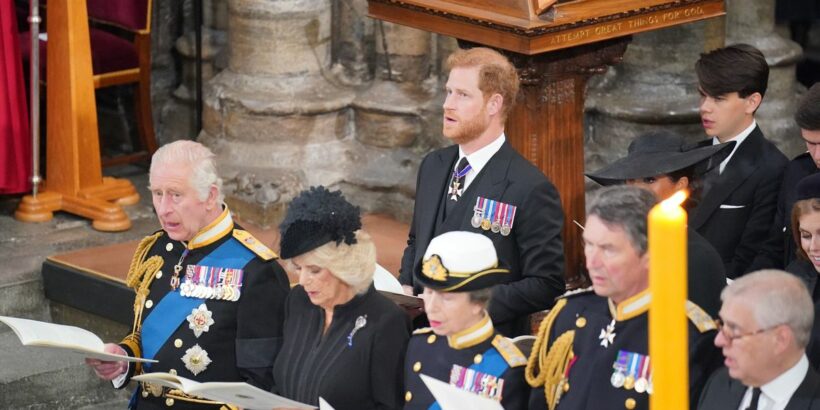 The Queen’s state funeral brought an end to the UK’s national mourning period — but her family remain under the cloak of grief.

King Charles III and his family will continue to observe an official mourning period, Buckingham Palace has confirmed.

Queen Elizabeth II was laid to rest on Monday, September 19, after a moving funeral at Westminster Abbey and a committal service at St George's Chapel in Windsor.

She was then interred, in a private ceremony, in the King George VI Memorial Chapel, joining her father, mother, sister and her husband, Prince Philip, whose coffin was moved from the royal vault to be with the Queen once again.

More than 2,000 people attended the funeral in the abbey, while mourners lined the streets of London and Windsor.

Millions also tuned in from home to say a final farewell to Britain's longest-reigning monarch.

For most of the country, daily life on Tuesday resumed and shops have reopened their doors following the bank holiday to mark the funeral.

Yet, the royals will not return to public life for another few days still.

When will the royal mourning period officially end?

The Royal Family is observing another week of mourning for the Queen after a state funeral full of emotion and ceremony under the glare of the world's cameras.

King Charles decreed on September 9, the day after the Queen died following her 70-year reign, that a period of mourning would be observed until seven days after the funeral.

Reiterating that statement, Buckingham Palace said: “Following the death of Her Majesty the Queen, it is His Majesty the King’s wish that a period of royal mourning be observed from now until seven days after the Queen’s funeral.

“Royal mourning will be observed by members of the Royal Family, royal household staff and representatives of the royal household on official duties, together with troops committed to ceremonial duties.”

The family members are not expected to carry out official engagements, and flags at royal residences will remain at half-mast until 8am after the final day of royal mourning, which falls on Monday, September 25.

Public goodbye to the Queen

The Queen's family have been left bereft by the death of their mother, grandmother and great-grandmother.

At times during Monday's send-off, their grief was palpable with Charles looking emotional and close to tears at the state funeral.

Sophie, Countess of Wessex, was also seen weeping during the long goodbye, as was Meghan Markle, Duchess of Sussex, who returned with Prince Harry, Duke of Sussex, to the fold to share their grief.

But Charles and his family will have been consoled by the support and love they have received from the public.

Tens of thousands turned out to watch the late monarch’s funeral procession make its slow journey through the capital and on to Windsor Castle for the committal service.

Initial estimates from ministers are that at least 250,000 people queued to see the Queen lying in state in Westminster Hall during the four days before her funeral.

However, that number, offered by Culture Secretary Michelle Donelan, is much lower than the 750,000 estimated by Whitehall officials and fewer than the 300,000 that queued through winter to see the coffin of George VI, the Queen’s father.

Flags on government and most public buildings, including the Houses of Parliament, returned to full mast on Tuesday morning to mark the end of the national period of mourning, with the Queen having been laid to rest.