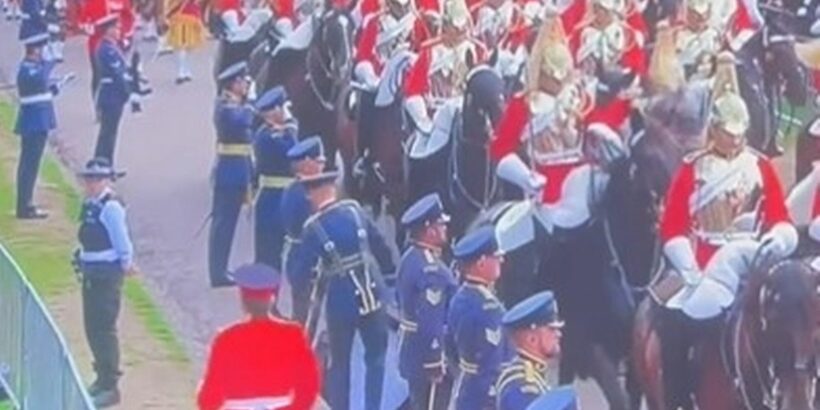 The royal guards are specially trained to stay poised and still no matter what happens, but that proves slightly difficult when you get whacked in the face by a horse's tail.

That's exactly what happened to one poor lad during the Queen's funeral procession as it headed towards St George's Chapel at Windsor Castle.

The hilarious clip, which has now been shared on Twitter by royal fans, shows blue coat royal guards standing by the side of the road as a troop of horse guards ride by.

Suddenly, one of the riders seem to momentarily lose control of his horse and wit began to serve at the side of the formation.

The animal's tail then swings and hits one of the blue coats in the face, making him take a step back from the line.

Viewers have since taken to Twitter in hysterics over the clip, with one user writing: "Don't you just hate it when a horse slaps you in the face with its tail."

Another said: "Horse tail in the eye, bet that hurt."

A third wrote: "Biggest moment of your life and you get taken out by a horse tail."

A fourth commented: "Anyone else spot the horse tail catch a soldier full in the face? He regained composure pretty quickly – I bet he wasn't expecting that."

Royal Central tweeted: "A horse flashes his tail hitting a soldier in the face. No harm done – even the most experienced of horses become overwhelmed by the occasion."

Her Majesty The Queen sadly passed away on September 8 at Balmoral Castle aged 96.

According to a statement from Buckingham Palace, the Queen died peacefully at Balmoral Castle in Scotland.

The Queen's coffin was brought down to London from Edinburgh on September 13.

She was transported from Buckingham Palace to Westminster Hall in the capital where her coffin laid in state for four days ahead of the state funeral.

The funeral at Westminster Abbey took place at 11am this morning (Sept 19) and she is now being laid to rest at St George's Chapel in the grounds of Windsor Castle.

You can leave your tributes to Queen Elizabeth II here